Share All sharing options for: Your Vegas Summer League preview...

As we did last summer here at Denver Stiffs, I'll attempt to preview the upcoming Las Vegas Summer League which kicks off on Tuesday night for the Nuggets (and I'll be at the game on Wednesday, more on that below). Given that the Nuggets only have 10 players on their active roster in mid-July for the second year in a row, following Summer League can be pretty interesting. Remember, Dahntay Jones' dominant performance last summer netted him a starting spot for the season.

First, let's glance at the roster (all heights and weights according to the official Nuggets website)...

Of those 10 players, Lawson and Weems are assured to be in training camp, but they're part of the Nuggets current 10-man roster. Other than Lawson and Weems, I'm very familiar with Rush, having watched him play regularly when he was a Laker, and have loosely followed Dupree, Karl and Simmons whose collective NBA careers could be summarized on a casino cocktail napkin right now.

All eyes will be on Lawson and Weems. A lot of this blog's readers are high on Weems, who put up some pretty damn good numbers (as long as he wasn't shooting three-pointers) in the D-League. I'm not sold on Weems yet, so I'm anxious to see him play against his peers this week. And Lawson - it goes without saying - will command everyone's attention. That's what happens when you're coming off an NCAA Championship and you're the first Nuggets first round pick in three summers.

Beyond Lawson and Weems, if history is any indication only one of the other eight players will be in training camp come October. So let's handicap who has the best shot of being our next Denver Stiff.

Based on need, the Nuggets could use a big man and a backup shooting guard (even if the rumored Arron Afflalo deal goes through). So that probably eliminates the 5'11" Dontaye Draper (not to be confused with "Dahntay" Jones or "Mad Men's" Donald "Draper", my favorite current TV character), Byars and Dupree. Unlike Draper and Byars, Dupree has had opportunities to produce in the NBA, but has yet to deliver. It hasn't helped that he played for four franchises in five NBA seasons before playing nowhere last season. But at 6'7" and 209 pounds, he's too undersized to be a true NBA forward and not quick enough to play the two-guard. Byars is also 6'7" but weighs 220 and had a productive NBDL season in Bakersfield, averaging 17.9 ppg on a respectable 47.5% shooting from the field to go along with almost five rebounds a night. 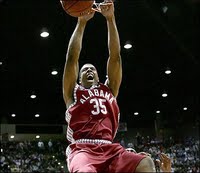 On the big man front, Hendrix, Simmons and Giles are all intriguing prospects. Hendrix was a rebounding beast at Alabama and in the NBDL last season, as well, averaging 11.4 collected caroms a night (three offensive) to go along with 14.5 points on 56.4% shooting. Throw in the fact that he's listed at 6'9" and 255 pounds and on paper that sounds like the kind of bruising rebounder we need in Denver. But before getting too excited about Hendrix, remember how amped we all were about Elton Brown last season who was listed at - you guessed it - 6'9" and 255 pounds. I've since heard that Brown is actually closer to 6'6". When I'm at the game Wednesday night, hopefully I can get close enough to gauge just how big Hendrix actually is.

Simmons, a former 15th overall pick, has put some time in the NBA but like Dupree he hasn't found anything stable. Since 2006, Simmons has worn four different uniforms and has been relegated to garbage time duty. Of most concern to me is why a 6'9" guy has a career field goal percentage of 40.9%, even in garbage time. And Giles (whose agent is listed as former NBA player Jerome Kersey at DraftExpress.com) had a decent NBDL debut, but didn't put up big numbers like Hendrix did. In college Giles was less than impressive, even after he transferred from Kansas to Oregon State. But you can't coach height and he allegedly has a 7'4" wing span.

And that brings us to the two shooting guards with NBA experience: Rush and Karl. Rush is a streaky shooter who - in theory - has a lethal outside shot, but I think he's still living off the reputation from some big playoff games with the Lakers on their way to the 2003-04 NBA Finals. Because if you look at his numbers, Rush's career 40% field goal shooting and 36% from behind the arc don't exactly get you excited. As one NBA executive recently told me about Shannon Brown: "He's good because he plays with great players and he's always open." And that certainly applied to Rush back in the day. Beyond outside shooting, Rush is worthless defensively and can't take the ball inside either. He's basically a double poor man's Wesley Person at this stage in his career.

As for Coby Karl, he will be you-know-who's sentimental favorite to make the training camp roster. If you forget for a minute that he's Nuggets head coach George Karl's son, Coby Karl's path to the NBA is remarkable and he is, without any doubt, a tough player who doesn't quit. Whether or not he can hit a wide open shot in the NBA is another story. During his very brief, 17-game stint with the Lakers (a period during which he played more NBDL ball than NBA ball), Coby's field goal and three-point shooting were dreadful. But in two NBDL seasons Coby has been solid, notably last season when he averaged 18.6 ppg, 4.4 rpg, 5.5 apg, 1.5 spg and shot 51.2% from the field and 39.4% from three. George Karl's son or not, numbers like that land you on someone's Summer League roster. (I must admit I have somewhat of a soft spot for Coby Karl because we are the exact same size - 6'5", 215 lbs.)

Without watching any of these guys play yet, if I had to make a pick today for who could be in training camp it would be Richard Hendrix, with Coby Karl coming in second. I just hope that if Coby makes the training camp roster it's on his own merit, and not because of his dad's influence.

On a side note, as mentioned above I'll be heading to Vegas on Wednesday afternoon to take in the Nuggets second game live and am hoping to catch other Summer League action throughout the day on Thursday. Longtime readers of this blog have read my alcohol-induced recaps from Vegas before, and I expect this week to be no different.

I just can't believe I get to watch pseudo NBA basketball live in July. I can't wait!!