What do we make of the Sonny Weems experiment now?...

Share All sharing options for: What do we make of the Sonny Weems experiment now?... 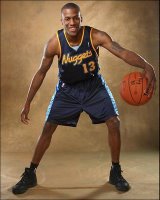 How about them numbers?

Those are Sonny Weems shooting, assists and turnover numbers in his first four Summer League outings. And it should be noted that his last game (that impressive 3-15 effort) didn't come against NBA caliber competition, but rather the D-League "All-Stars". His fifth and final game is later today when the Nuggets face off against the Hornets at 6:30pm MST.

As far as I'm concerned, Sonny is on thin ice. And I'm not the only one saying so. Attempting to be diplomatic, Nuggets head coach George Karl was quoted in the Denver Post saying: "Sonny is an athletic player that's got to learn how to play basketball. At times it looks like he's taking that step, and then at times it doesn't look like he's taking that step. He has 10 days here at summer league. He's going to have to figure out his niche. He's got the talent to play in the league. The question will be: Does he have the mind to play in the league?"

From what I've seen of Weems in Summer League thus far, both in person and watching the games online, I'm as suspect as Karl is about Weems ability to compete on the NBA level. Lest we forget that shooting guards taken in the second round (Weems was the 39th overall pick in 2008) rarely - if ever - pan out. But as noted in my recap of the Nuggets second Summer League game, not only did Weems miss most of his shots but he took bad shots and compounded his problems by not even looking to pass.

Along with Ty Lawson, Weems was targeted as the guy Nuggets fans were excited to watch play in Las Vegas this summer. But while Ty Lawson (thankfully) has improved dramatically in his last two Summer League games, Weems came off his "best" outing (41.1% against the Trail Blazers on Friday) to throw up another stinker against the weakest of all Summer League squads, the D-Leaguers. If Weems keeps playing like this, his Nuggets career will rival that of Von Wafer's or Bobby Jones' (the one traded to the Knicks for Renaldo Balkman, not the old school one) for longevity.

...Hoopsworld's Travis Heath tracked down former Nuggets Dahntay Jones and Nikoloz Tskitishvili in Vegas and scored some pretty candid quotes from each of them.

...Remember when I wrote about seeing Karl talking to Mike Dunleavy before the Nuggets second Summer League game? Apparently Karl was endorsing a potential Clippers' acquisition of Allen Iverson. Could Karl be doing this to sink or save the Clippers?

...And if you're going to church today, please pray that the Lakers botch this Lamar Odom re-signing. If someway, somehow Odom ends up in Miami (or anywhere besides Los Angeles) the Western Conference title suddenly becomes a fair fight.