Share All sharing options for: Our newest Nuggets: Arron Afflalo and Walter Sharpe...

As discussed last Friday, the Nuggets have consummated yet another trade with their official trading partner; the Detroit Pistons. This time, the Nuggets have acquired the seldom used "shooting" guard Arron Afflalo along with forward Walter Sharpe thrown in and cash from the Pistons in exchange for a future second round pick. I doubt this deal will rank with the Allen Iverson-for-Chauncey Billups trade in the lore of great fleece jobs by the Nuggets, but I suspect it will pay dividends a la the Renaldo Balkman acquisition from the Knicks last summer - another deal where the Nuggets acquired a recent first round pick for next to nothing.

As noted Friday, Afflalo's size and his numbers are eerily similar to the man he in theory is replacing, Dahntay Jones. I don't expect Afflalo to ever be a productive outside shooter (his form alone pretty much sinks that possibility), but that doesn't mean he couldn't fill in as our defensive two-guard presence. Afflalo's also been coached well (until last season, of course), having been tutored by Ben Howland at UCLA and Flip Saunders as a rookie. Look for Afflalo to be the primary shooting guard reserve when starting shooting guard J.R. Smith heads to the bench. Boy, that has a nice ring to it. 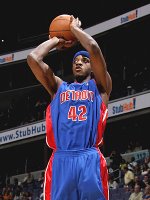 I must confess that I know nothing about Sharpe, other than what I just read at DraftExpress.com where they allege he's a poor defender with big upside. Sharpe was already due to play on the Pistons Las Vegas Summer League team, so perhaps we'll get to see him suit up this week. But with Sharpe guaranteed to be paid in 2009-10, this might hurt Denver Stiffs' Summer League favorite Richard Hendrix's chances of making the training camp roster.

With Afflalo and Sharpe on board, the Nuggets are now on the hook to pay 13 players (including Steven Hunter and Antonio McDyess) about $72 million. That's $2 million north of the dollar-for-dollar tax threshold. To fill out the roster, look for Anthony Carter to be re-signed for the league minimum of $1.3 million, a free agent signee by way of remaining mid-level exception money and one of the Summer League guys to crack the squad. In other words, expect a final payroll to be in the $76-77 million range, and that's before a big move for a big man - if such a deal even happens - comes down.