Share All sharing options for: The Nuggets offseason: Dahntay Jones... 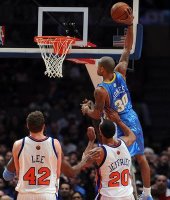 Before jumping into whether or not the Nuggets should re-sign Dahntay Jones, two news stories just broke tonight that will impact Dahntay's future.

First, the NBA's salary cap for 2009-10 will be lowered to $57.7 million and, of more importance to Nuggets fans, the luxury tax threshold - the number which teams are forced to pay a dollar-for-dollar tax if they exceed it - has been lowered to $69.92 million. For those keeping score at home, this is about $1.5 million less than Denver Stiffs and alleged NBA "experts" had forecast since the season ended.

And second, Chris "Birdman" Andersen has re-signed with the Nuggets for up to $26 million, with Andersen getting $3.7 million next season in an incentive-laden contract, according to the Denver Post's Benjamin Hochman. I guess the BringBackBirdman.com petition worked after all!

Lost in the shuffle between the re-signing of Chris Andersen, possibly signing another free agent and the acquisition of Ty Lawson has been the re-signing of Dahntay Jones, one of the best surprises of the 2008-09 Nuggets season. Even I was dubious about Dahntay early in the season when, just a handful of games into Dahtnay's first Nuggets season, I added him to the list of Nuggets "shooting" guards who can't make a shot. A full season and postseason later, Dahntay still couldn't hit an outside jump shot with consistency but he proved to be a valuable member of the team. And when you factor in his $1.3 million contract, Jones was an absolute steal.

The problem going forward, of course, is that Dahntay can't be had for $1.3 million again. What price will he command? Will the Nuggets be willing to pay it? Should they? Let's discuss...

The Good: To the credit of George Karl and his coaching staff, the Nuggets were able to convert Dahntay from a dunk-only slasher with no jump shot to a physically tough, solid defensive two-guard who still threw down jaw-dropping dunks. The reason I mention Karl and his staff here is because I know for certain they spent a lot of time with Dahntay so he wouldn't end up in the obscure dustbin of Nuggets shooting guard history with names like Yakhouba Diawara, Von Wafer, Bobby Jones, DerMarr Johnson, Julius Hodge and countless others.

Simply put, Dahntay was the closest things the Nuggets have ever had to a Bruce Bowen-type defender and he played the part well. In only 18 minutes of playing time a night, the Nuggets could count on Dahntay to make his six allotted fouls mean something, while pestering his opposing shooting guards into tough shots and finishing fast breaks with authority. And even though myself and many other fans demanded that J.R. Smith start in place of Dahntay early in the season, the rotation of having Dahntay play about eight to ten first quarter minutes and then have J.R. enter as a spark off the bench seemed to work more than it didn't. (It should be noted that as reported on this blog by Chris Tomasson, J.R. will likely be replacing Dahntay as the starting two-guard next season whether Dahntay returns or not.)

And beyond his performance on the floor, Dahntay's enthusiasm from the sidelines was unparalleled on the Nuggets this year. Having been all but kicked out of the league for poor play in his first five seasons, you could tell that Dahntay appreciated every second he had with the Nuggets in 2008-09. Frankly, I think Dahntay was a better cheerleader for the Nuggets than their actual cheerleaders.

The Bad: Entering your sixth NBA season, you don't find yourself scrambling to make a roster during the NBA Summer League without a good reason. In Dahntay's case, his inability to make an open jump shot and a suspect defensive effort got him cast off by the lowly Sacramento Kings in 2008, making him available for the Nuggets to poach him for next-to-nothing (by NBA standards) last summer. But that should be old news at this point.

The current knock on Dahntay remains that wretched jump shot, which to be fair improved from the corner (even from three) as the season went on but needs a great deal more work. Another negative levied at Dahntay would be his sometimes careless defensive play. He's prone to picking up easy fouls that don't deter the opposition from scoring while getting the Nuggets into early foul trouble. And we're well aware of his propensity to play dirty, as well. Look, I hate Kobe Bryant as much as the next non-Lakers fan (well, probably more) but tripping and pushing Kobe in the back does the Nuggets no good. In fact, it only gets a player like Kobe more fired up (see Game 6 of the Western Conference Finals).

The final "bad" on Dahntay isn't actually Dahntay's fault, but rather Karl's. For some bizarre reason - and with very few rare exceptions - whenever Karl pulled Dahntay from a game and substituted in J.R., we'd never see Dahntay again. I joked in the playoffs that Karl treated Dahntay like a pitcher in a baseball game. Once he was out, he was out permanently. I have no problem with J.R. being subbed in for Dahntay, clearly an upgrade. But then Karl would bring in the six-foot Anthony Carter for J.R., leaving Dahntay on the bench while A.C. played side-by-side with Chauncey Billups. If the Nuggets decide to re-sign Dahntay, one can only hope that Karl realizes he's allowed to sub Dahntay back into the game when J.R. is having an off night. 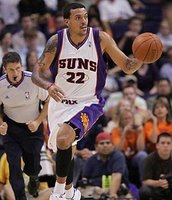 Possible Replacement(s): Unfortunately for Mr. Jones, he picked the wrong summer to come off the best season of his career. And with the news breaking of the NBA's luxury tax number being lowered to $69.92 million, not only will it be virtually impossible for the Nuggets to pay Dahntay the $3 million or so he'll command in the open market, but the replacements for Dahntay - if any - has just become a very short list.

With Chris Andersen making $3.7 million next season, about $2.2 million will be available to re-sign Dahntay or another player as part of the Nuggets mid-level exception money.

In the $2 million range that the Nuggets have to spend, there are a handful of players to consider. These names include Hill, Matt Barnes, Steve Novak, Von Wafer and Channing Frye. But a lot of those potential acquisitions depends greatly on what happens with Linas Kleiza and if the Nuggets are able to make a deal for a true center. For example, if Kleiza were to be signed by the Raptors and the Nuggets don't match, then signing Barnes, Wafer or Novak would come into play because the Nuggets would need three-point shooting. But if the Nuggets were to keep Kleiza and not obtain a true center, Frye would be the guy we'd need. Hill is versatile enough to contribute at two-guard or small forward, but he'll likely gravy train with the Celtics (a good thing considering they weren't old and injury prone enough already) or end his career with a thud by signing with the Knicks as is being reported now.

It should be noted that with the lowering of the cap, other attractive free agents who won't be too pricey to some are now unavailable to the Nuggets. This list includes Hakim Warrick, Anthony Parker, Jamario Moon, Marquis Daniels, Rashad McCants and for those of you pining away for the Nuggets to sign Shawn Marion outright let me be very clear: FORGET IT!!

The Verdict: Assuming Dantay commands $3-plus million per season, his days as a Nugget are over. The question then becomes, what do you do with the $2 million of mid-level exception money that should be leftover from the Andersen deal? I'll give you two scenarios...

If Kleiza departs but the Nuggets secure a center via trade, you have to consider Barnes or Novak to fill the three-point gap and spread the floor on offense.

If Kleiza stays but the Nuggets don't acquire a center via trade, Frye's the guy whom the Nuggets should allocate their $2 million mid-level exception to.

This isn't to say that I don't want Dahntay back in a Nuggets uniform, because I very much do. It was evident that Dahntay is a hard worker and I like how his game improved as the season went on. But between Andersen, Carter, Kleiza and Dahntay, it appears as though Dahntay is most likely to be a salary cap casualty.

On a final note, I'll sign off tonight with a quick Dahntay-related story. Courtesy of my friend's great seats, I sat right behind Dahntay's mom and his adorable son for every playoff game. During one of the games, my friend said something to Ms. Jones like "I hope Dahntay comes back next year." In a nice way, her reply was: "tell the team that."

Dahntay Jones deserves our thanks for giving us everything he had to give last season. Let's hope the Nuggets find an able replacement and he won't be missed too much.

[CORRECTION] In my recent column on potential free agent signings, I suggested that Andersen could sign a backloaded deal that would pay him $2 million in year one, $3 million in year two and so on. Chris Tomasson of the Rocky Mountain Independent has since corrected me. Since the Birdman has no "Bird Rights", the most he could be increased each year is 8%. Hence why Andersen will be making $3.7 million in year one of his new contract.