Share All sharing options for: Now what? Part deux...

The news reverberated throughout Nuggets Nation like the thunder storms that hit Colorado late Wednesday night: Ron Artest will be signing with the Lakers for the mid-level exception (approximately $5.6 million per season). While some have already conceded the 2010 NBA Championship to the Lakers, others are predicting that Artest will ruin the Lakers championship chemistry.

Like the other "troubled" NBA stars of years past who joined veteran, championship-caliber teams (such as Rasheed Wallace with the Pistons or Dennis Rodman with the Bulls), I believe Artest will fit in well with the Lakers and, most unfortunately for Nuggets fans, make the Lakers better.

Even worse, Artest's arrival - and Trevor Ariza's departure to the Rockets - all but guarantees that Lamar Odom will re-sign with the Lakers. Not only can the Lakers offer Odom more than any other team (because they hold his "Bird Rights"), but both he and Artest were born in Queens, NY only seven days apart and as a result allegedly have a long time friendship.

By the way, how do you think George Karl's inbounds pass "plays" will work when the Lakers have Kobe Bryant, Artest, Odom, Pau Gasol and Andrew Bynum on the floor together. Gulp.

But just because the Lakers have officially certified themselves as the New York Yankees of the NBA doesn't mean the Nuggets need to give up on their summer plans to improve and go for their first championship in franchise history. A lot can happen in an NBA season, whether it be injuries, chemistry issues, off the court problems, and so forth (of course, those things tend to afflict the Nuggets more than the Lakers, but one can hope). And as long as it's within the realm of an owner's financial ability to spend without losing too much money, I believe multi-billionaire owners have an obligation to the fans to do whatever it takes to win if they have that rare chance at a title. Which the Nuggets do.

Fortunately for Nuggets fans, I believe we have one of those owners. The problem for Stan Kroenke and the Nuggets' front office brass, however, is that even if Stan is willing to spend over the luxury tax to win, the Nuggets don't have a lot of options (as we've been detailing with for weeks now).

I've already laid out four trade proposals that creatively circumvent some of the Nuggets luxury tax woes. But with Artest joining the Lakers and Hedo Turkoglu rumored to be a Trail Blazer by the time I wake up, adding a Marc Gasol or a Jeff Foster may not be enough for the Nuggets to reign supreme in the Western Conference. They'll need a free agent, too.

But how can the Nuggets possibly sign an impact free agent? They're likely going to commit at least $4 million per year to Chris Andersen, eating up much of the $5.6 million mid level exception money that the Lakers used to sign Artest, the Rockets will use to sign Trevor Ariza and the Celtics might be able to use to sign Rasheed Wallace. And if the Nuggets make any one of the trades I proposed or another deal I hadn't thought of, not only will they be well into luxury tax territory but they'll also eat into that $9.8 million trade exception, limiting sign-and-trade possibilities.

Stumped by this conundrum, I asked my friend Travis Heath of HoopsWorld.com what the Nuggets options are and he pointed out that there's already been talk of the Nuggets backloading the Birdman deal and Andersen's agent being amenable to it. Duh!! When Travis mentioned this, I couldn't believe I hadn't given this scenario more thought. By "backloading" the contract, the Nuggets could - in theory - give Birdman a five-year, $20 million deal in which he'd get like $2 million in year one, $3 million in year two, $4 million in year three, $5 million in year four and $6 million in year five. On the surface it sounds crazy to pay a 36 year old Chris Andersen $6 million in 2013-14, but by then it'd be an expiring contract that in of itself would have trade value.

The bottom line is that if the Nuggets were able to get away with paying Birdman $2 to $3 million this upcoming season, they'd have another $3 million or so of mid level exception money to spend on a free agent. That won't be enough to bag a Paul Millsap or a Rasheed Wallace or a Shawn Marion or even an Anderson Varejao, but in this economy there will be plenty of other intriguing options at bargain (by NBA standards) prices. Such as... 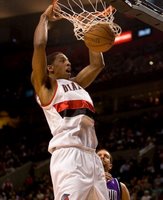 It's already leaked that the Nuggets have "interest" in Frye, whatever that means. Thus far, Frye has had a Joe Smith-type NBA career. Meaning, he had a great rookie year but his performance has rescinded since. But if there are two things you can't coach in the NBA it's height (Frye is listed at 6'11") and age (just turned 26 in May). If the Nuggets aren't able to swing a trade for a legit seven-foot center, then bringing in someone like Frye would be the least they could do. If such a center is somehow added, Frye provides great "power forward insurance" to the injury prone Kenyon Martin and Nene. And for about $3 million per season, Frye could be had.

With all the commotion over the draft, free agency and potential trades, I haven't been able to write up my offseason analysis of Dahntay Jones, a real contributor to the Nuggets success last season. We'll get more into the specifics of Dahntay's future with the Nuggets soon, but the broad strokes are that if the Nuggets were to acquire a center via trade and could get Birdman's contract down in the first two years, re-signing Dahntay must be a priority. Though he's an awful outside shooter, his value is defensively where he gave the Nuggets their first Bruce Bowen-type player since T.R. Dunn manned the starting two-guard spot. Dahntay is also a good finisher around the basket and was cheated out of playing time by George Karl in favor of an absurd Anthony Carter/Chauncey Billups backcourt. If Dahntay can be re-signed for less than $3 million per season, it deserves very serious consideration. 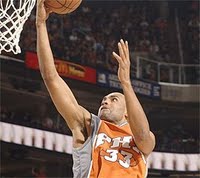 Like Frye, Hill has been rumored to be in the Nuggets sights. When I first heard this rumor I didn't like it. But if the Nuggets were to lose Linas Kleiza due to either free agency or in a trade to acquire a true center, someone would need to step into the backup small forward spot and why not Hill? Yes, he's old and injury prone - although he appeared in all 82 games last season and 70 the season before, notably the two seasons when he wasn't on my fantasy team - but Hill is still a major contributor offensively and would fit in perfectly with the Nuggets new direction of acquiring character over characters. My hunch is Hill could be had for about $2.5-$3 million per season at this stage of his career.

We've heard nothing that indicates Wilcox even being on the Nuggets radar, but he should be. Wilcox is a tough, bruising 6'10" and is coming off a sub-par season by his standards. Signing or not signing Wilcox would depend a lot on the Nuggets ability to secure a true center via a trade. If the Nuggets were to come up empty on the center front, Wilcox merits serious consideration. The problem is that he's coming off a $6.5 million annual contract and might not be available in the $2-$3 million range. 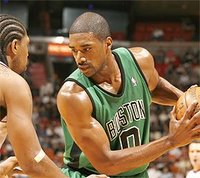 File this suggestion under "Wishful Thinking," but I've wanted Powe to be a Nugget ever since Powe was, well, a Nugget (the Nuggets drafted him 49th overall in 2006). The Celtics foolishly decided not to offer Powe a qualifying offer, making the power forward who recently underwent his third knee surgery an unrestricted free agent. But given Powe's incredible attitude and work ethic combined with the wonders that Nuggets conditioning coach Steve Hess has done with K-Mart and Nene's knees, why not let Powe rehab on Denver's watch (he'd be available halfway through the 2009-10 season) while grooming him to be K-Mart's heir apparent? 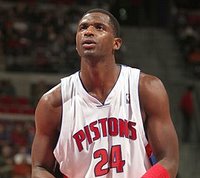 I hadn't even thought of McDyess ever appearing again in a Nuggets uniform until one of this blog's readers suggested it. The thinking here is pretty simple: we're paying him $3 million next season whether he plays for the Nuggets or not, so why not throw in an extra million or two and have him actually show up? Of course, McDyess would have to forget that whole "I hate Denver and will never play there ever, ever, ever, ever again" thing that he has going on.

Others who merit a low ball offer but will likely be too pricey: Hakim Warrick, Drew Gooden, Zaza Pachulia and Mikki Moore.

I have to admit I don't have an absolute favorite on the list above. To me, Frye and Powe have the most upside with Dahntay and Hill being the safer bets. Frankly, I don't think the Nuggets could go wrong with any of those four. But again, this all depends on the Nuggets ability to backload Birdman's contract and not get into crazy luxury tax territory through another potential deal.

Worst case scenario, I'll have fully recovered from my own ACL surgery by November and I'll take one of those remaining roster spots.