Not the start we were hoping for (Summer League debut recap)...

Share All sharing options for: Not the start we were hoping for (Summer League debut recap)... 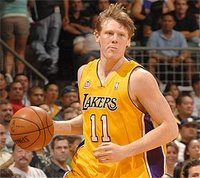 I have a ton to do before heading to Las Vegas tomorrow, so unfortunately I have to make this brief. First off, I must admit that I didn't see tonight's game, but I had a good excuse: I had the pleasure of attending my mother's - a lifelong Nuggets season ticket holder - graduation party for completing her PhD in clinical psychology.

But in looking at the box score, a few numbers jump out at me: 2-16, 0-7 and 1-5. That's what Sonny Weems, Ty Lawson and Kareem Rush shot, respectively, in the Nuggets' summer timers 78-76 loss to the Spurs Summer League squad. Alarmingly poor shooting numbers to be certain, but we'll give them a pass as it was their first summer league outing. Hopefully tomorrow night - when I'm in the stands - these Nuggets will put up a far superior performance.

On the positive side, however, here are a few more numbers to have in mind: 6-7 and 3-4. That's what Coby Karl shot from the field and behind the three-point arc, respectively, in 25 minutes of playing time. I know a lot of readers are adamantly opposed to the coach's son making the training camp roster, but if Coby keeps this up he'll earn his way into a camp invite.