The case of the missing two-guard solved?...

Share All sharing options for: The case of the missing two-guard solved?... 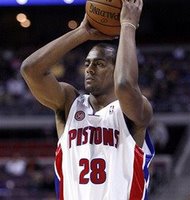 The Denver Post's Benjamin Hochman is reporting that the Nuggets are working on a deal with their exclusive trading partner, the Pistons, for backup two-guard Arron Afflalo. Like Jones and the numerous second-tier "shooting" guards that passed through Denver over the years, Afflalo has a very unconventional (read: bad form) jump shot but has a lot of upside. He's not the athlete Jones is/was but, like Jones, he's 6'5", weighs 215 pounds and Afflalo even put up the same numbers as Jones in less playing time.

The Nuggets need at two-guard in Jones' absence isn't all about the numbers, of course, and the knock on Afflalo has been his defense. Or lack of it. But Jones had the same rap before the Nuggets coaching staff coaxed him into a solid defender, and maybe they could replicate that success with Afflalo, too. We'll analyze a possible Afflalo acquisition in further detail if/when this actually happens.

On a side note, our hopes of Channing Frye wearing a powder blue and gold jersey next season have been officially dashed. The Phoenix Suns have signed two of the Nuggets offseason targets: Frye and Grant Hill.

Depending on what the Nuggets give up, I'd be in favor of an Afflalo acquisition. He's cheap, young, has big upside, etc. But this isn't the "big move" we're all hoping for.