Share All sharing options for: The Nuggets rear view mirror...

With Denver Stiffs and just about everyone else being consumed by whether or not the Nuggets can compete with the Lakers and Spurs in 2009-10, they/we must keep a close eye on the competition right behind us. They're closing in.

While I was off at Comic-Con this weekend, two big signings came down that will directly affect the Nuggets next season: the Trail Blazers signed former Nugget point guard Andre Miller and the Mavericks roped in power forward Drew Gooden, just weeks after acquiring Shawn Marion in a complicated four-team trade.

None of these moves automatically propels the Blazers or the Mavericks over the Nuggets necessarily, but both franchises have certainly improved and could conceivably end up with higher win totals by 2010. Remember, the young and inexperienced Blazers equalled the Nuggets win total last season, and the old and experienced Mavericks were only four games worse. Putting our Nuggets bias aside momentarily, these two teams need to be taken very seriously. 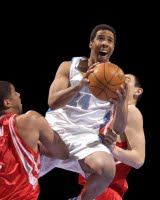 By adding Miller, the Blazers solidified their position as one of the deepest teams in the NBA. Miller will likely start alongside Brandon Roy (one of my favorite non-Nuggets and soon to be one of the most clutch players in the NBA), LaMarcus Aldridge, Nicolas Batum and a presumably healthier Greg Oden. And the Blazers have a lottery-caliber starting five off the bench with Steve Blake, Rudy Fernandez, Travis Outlaw, Martell Webster and Joel Pryzbilla. And that's excluding Jerryd Bayless who had another solid Summer League. The Blazers are long, lean, deep and young and they're going to give the Nuggets fits this season. Even worse, their "reasonable" $55 million payroll - which includes $9 million owed to Darius Miles which comes off the books next summer - has the Blazers set up to re-sign Roy and Aldridge and pursue other free agents in the future.

With Gooden and Marion joining a Mavericks team already featuring Dirk Nowitzki, Jason Kidd, a presumably healthier Josh Howard, Jason Terry and Erick Dampier, the Mavericks undoubtedly improved. They did lose Brandon Bass, Jerry Stackhouse and Antoine Wright, however, and in stark contrast to Portland, Dallas' roster is old, not particularly deep and expensive. Hard data isn't available, but it can be reasonably estimated that the Mavericks payroll will be at least $91 million next season - the NBA's second highest if the Lakers re-sign Lamar Odom (by contrast, the Nuggets payroll is estimated to be about $76-ish million).

After the Blazers and Mavericks, the Utah Jazz remain a team to reckon with. Besieged by injuries to Deron Williams and Carlos Boozer last season, head coach Jerry Sloan had the Jazz in position to overtake the Nuggets late in the season until Denver finally got its act together, winning 14 of their final 17 games to secure the Western Conference's second seed while Sloan's Jazz uncharacteristically imploded. The Jazz are in a precarious financial situation, however. By offering Paul Millsap a big contract, the Blazers forced the Jazz to match and Utah's payroll currently stands at $84.6 million - the NBA's third highest if the Lakers re-sign Odom. And by matching the Millsap offer sheet, the Jazz are clearly indicating that they want to move Boozer, but with almost $13 million owed to Boozer, making the numbers work isn't going to be easy.

Meanwhile, the Hornets have stayed put and are unlikely to do much due to cost constraints, the Clippers have (in theory) improved simply by winning the Draft Lottery and the Thunder will only get better with their nice core of young star players. Of no present concern to me are the Warriors (too many swingmen, not enough structure), Suns, Timberwolves, Grizzlies or Kings, all of whom will be revisiting the lottery in 2010.