Extensions for Melo, Karl and Wark?...

Share All sharing options for: Extensions for Melo, Karl and Wark?... 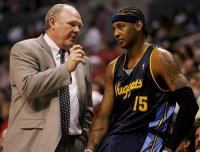 If you're like me and have been disappointed by the Post's lack of Nuggets coverage during the offseason, I encourage you to read our old friend Chris Tomasson's latest articles at the Rocky Mountain Independent and Pro Basketball News. Doing his usual solid reporting, Tomasson has some news for us regarding the contracts for Nuggets head coach George Karl, Vice President of Basketball Operations Mark Warkentien and even Carmelo Anthony and other players.

Before jumping into the news, it should be noted that this is further proof of why print is losing out to the internet. While the Post guys continue to write to their "print" limitations, Tomasson (and even myself here at Denver Stiffs) can write to what needs to be said, not to what needs to be printed.

...the Nuggets are going to extend George Karl for two more years. Readers of this blog know my take on a Karl extension. While I believe he did a great job last season, I'm concerned that much of this was because Karl had something to prove. If he gets cushy job security now, are we going to get the same Karl in 2009-10? I'd prefer to see Karl extended after we see how the Nuggets respond to their newfound success.

...Nuggets vice president of basketball operations Mark Warkentien - who won the NBA's 2008-09 Executive of the Year - is also in line for an extension. I must admit that Wark is starting to win me over. I didn't like the direction he had the Nuggets going in (and said so many, many, many times) when he was assembling a Denver squad that mirrored the Jailblazers he co-architected in Portland. But since last season's disastrous playoff "run" ended, Warkentien (along with co-GM Rex Chapman and team adviser Bret Bearup) has finally put a premium on character over characters. Hence the acquisitions of Renaldo Balkman, Chris Andersen, Dahntay Jones and, of course, Chauncey Billups. If the Nuggets want to extend Warkentien now, Denver Stiffs is ok with it.

On the player front, Melo told Tomasson that if the Nuggets wanted to discuss an extension this summer, he'd "consider that." As of today, Melo is in line to receive $18.5 million in 2011-12, if he doesn't opt out before then. And Tomasson is also reporting that the Nuggets will sign Anthony Carter for the minimum (if Carter accepts it), won't match an offer to Linas Kleiza if he's overpaid and are open to bringing back Johan Petro for the right price.

Of note in all this is that the Nuggets weren't willing to pay Channing Frye $2 million per year. I thought $2 million was the right price for Frye, but now we know why we lost him to the Suns.

As Tomasson indicates, all of this news ties into one theme: the Nuggets want stability. On the surface of it, I like stability. Especially given that the Nuggets had virtually no stability between the post-Alex English era and the current Carmelo Anthony era. That being said, I don't believe the Nuggets as presently constructed have enough size to overtake the Lakers or Spurs. I appreciate the organization's desire to keep a winning team together, but they need to find a way to add a center without disrupting the chemistry we currently have.

Unfortunately, the only person that seems to be suggesting bold trades for a true center is me.