Share All sharing options for: The Nuggets offseason: Linas Kleiza...

As we did last summer, Denver Stiffs will look at each of the Nuggets offseason decisions in detail beginning with free agents first. In no particular order, I've decided to start with small forward Linas Kleiza who's essentially a restricted free agent. I say essentially because Denver will likely exercise their $2.7 million qualifying offer to Kleiza, meaning that Kleiza could sign with another team for more giving the Nuggets the right to match any offer.

The Good: When motivated, Kleiza is a first-rate scorer off the bench. It's rare to have a reserve player who not only can hit an open three-pointer but also can create his own shot when the shot clock is winding down. During the nine games that Carmelo Anthony missed in January due to the broken hand injury, Kleiza (still coming off the bench) had games with 21, 18, 26, 27, 18 and 16 points. All but one of those games were wins.

In Game 2 of the conference finals, Kleiza demonstrated his value yet again with 16 points and eight rebounds (three offensive) off the bench to spark the Nuggets to a 106-103 victory. The Nuggets don't come back from LA with a split without Kleiza's contribution. Often forgotten is Kleiza's 2008 playoff performance against the Lakers, as well. While most of the Nuggets played like cowards in that series, Kleiza showed no fear in Games 1 through 3 against the purple and gold (of course, the Nuggets were easily swept in that series). And continuing on the "no fear" path, Kleiza isn't afraid to take big shots, either. This was evident when Kleiza nailed the biggest shot of the 2008 Beijing Olympics when his three-pointer with 2.1 seconds left gave Lithuania a victory over favored Argentina. 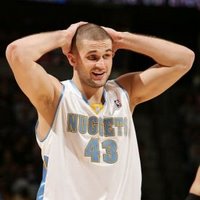 The Bad: Once on a trajectory to be a real offensive force off the Nuggets bench in a poor man's Manu Ginobili-type role, Kleiza reverted in 2008-09 and it was all mental. Before the Clippers game on Halloween, Kleiza was on the verge of signing at four-year, $25 million contract that was suddenly withdrawn by Nuggets owner Stanley Kroenke because, behind-the-scenes, the Chauncey Billups trade was in the works. Had Kleiza signed that deal, acquiring Billups might not have been possible.

So while it might be understandable that Kleiza would be upset, rather than turn the contract snub into a motivation tool Kleiza sulked his way through a very inconsistent season. For those who saw Kleiza play live regularly, you probably noticed that his body language was notably different than from the season before when he had more of a cold blooded shooter mentality. Remember those nine games he filled in for Melo above? Well in two of them, he shot 0-for-6 and 1-for-6 on back-to-back nights (one win, one loss...go figure).

And throughout last season, Kleiza had a lot of those "off nights": 1-for-8 on opening night, 2-for-8 in that Clippers game after the contract fiasco, 2-for-7 a few nights later against the Warriors, 3-for-9 against the Clippers again, 1-for-5 against the Magic, 1-for-6 against the Sixers, 1-for-7 against the Kings, and so on. In March, Kleiza went three straight games making only one shot against at least five attempts. In the game before that stretch, he shot 2-for-7 against the Nets (to be fair, everyone was awful in that game) and in the game before that, 3-of-9 against the Clippers again. In fact, Kleiza went five consecutive games without a three-pointer made in February, seven consecutive games without a three-pointer made in March and over the entire month of March, Kleiza made just six three-point shots against 31 attempts. Ouch.

Oh, and he's a sieve as a defender, too. Too slow to defend super quick small forwards and too short to defend power forwards. 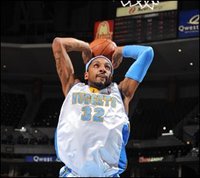 Possible Replacement(s): If Kleiza walks - either because he takes an offer from another team that the Nuggets don't match or the Nuggets don't offer him the qualifying offer in the first place - his primary replacement would be Renaldo Balkman whom I advocated to be the small forward sub off the bench in the playoffs over Kleiza in the first place. Since Nuggets head coach George Karl jerked Balkman's minutes around so much in the regular season, it's hard to evaluate what Balkman's contribution would be in Kleiza's spot. What we do know for sure, however, is that when given consistent minutes Balkman produces. Note Balkman's March stretch (the same time that Kleiza was struggling mightily). From the March 6th game against the Jazz to the March 20th game against the Wizards, Balkman averaged 10.7 points and 10.7 rebounds (almost five offensive) per game while shooting well over 50% from the field. Against the Thunder on March 11th, Balkman had more offensive rebounds than defensive rebounds!

But unlike Kleiza, Balkman cannot create his own shot and feeds primarily off of offensive rebound put-backs (something Kleiza doesn't do particularly well).

Beyond Balkman, a non-Kleiza future might include more playing time for Sonny Weems, who allegedly performed well in the NBDL, but Karl is reticent to give young players ample playing time. Or, if the Nuggets re-sign Dahntay Jones but part with Kleiza, they could go small and feature J.R. Smith and Jones together in Kleiza's place. And of course there might be a free agent swingman out there that the Nuggets could poach for the league minimum as they did with Jones and Andersen last summer. If there's one thing that grows on trees in the NBA, it's 6'6"-to-6'8" "swingmen" in need of a minimum contract, just ask Julius Hodge and DerMarr Johnson. 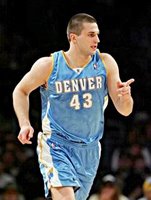 The Verdict: IF the Nuggets can somehow keep Kleiza for the $2.7 million qualifying offer without jeopardizing other dealings (more on that below), I say do so, even if it means creeping into the luxury tax a bit. First off, paying a guy $2.7 million who could pop for 15-20 points on any given night is a steal by NBA standards. Secondly, I believe there's real value to having someone on your team who's been around a while, knows his teammates' tendencies on the floor and knows the "system" (who am I kidding, the Nuggets don't have a system). And finally, if Kleiza's last five games and postseason play were any indication, I believe he's come to accept the contract issue and may perform even better next season knowing he'll be an unrestricted free agent at season's end.

That being said, if re-signing Kleiza - even at just $2.7 million - comes at the expense of re-signing Chris "Birdman" Andersen or acquiring a legitimate big man, it's best to let Kleiza walk. Balkman filled in admirably behind Melo this past season and can do so again next season to fill the void that would be left by a Kleiza departure. But it should be acknowledged that over the course of his four season tenure in Denver, Kleiza has been a producer off the bench. If the dollars are right and there aren't better deals to be had, Kleiza should be welcomed back.