Share All sharing options for: The Nuggets offseason: George Karl... 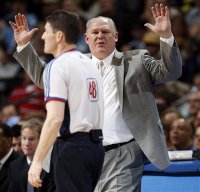 After The Denver Post's Chris Dempsey wrote about Nuggets head coach George Karl possibly being extended this summer, the virtual chat and the Denver Stiffs email box have been abuzz with arguments on both sides of this issue. Some readers want Karl extended now. Others not only don't want Karl extended, but they want him removed altogether. But even those in the anti-Karl camp will concede that coming off a 54-win season and a Western Conference Finals appearance Karl is going nowhere. At least for now.

Karl makes about $3 million per season. Since coach salaries aren't often made public, I have to guess as to where that puts Karl among his peers. According to Forbes magazine, the Lakers' Phil Jackson pulled in $10.3 million last season, followed by the Bobcats' Larry Brown, the Knicks' Mike D'Antoni, the Warriors' Don Nelson, and the Celtics' Doc Rivers - all of whom make at least $6 million per season. I also know that the Trail Blazers' Nate McMillan makes more than $6 million per season and I'm sure the Spurs' Gregg Popovich does even better. And it's rumored that the Jazz's Jerry Sloan, the Rockets' Rick Adelman, the Clippers' Mike Dunleavy and the Hornets' Byron Scott all make at least $5.5 million apiece, and the Wizards just hired Flip Saunders for over $4.5 million per season, the Mavericks' Rick Carlisle pulls in $4.4 million and Stan Van Gundy probably comes in at about $4 million. Assuming Karl makes more money than the rest of his coaching peers, his salary ranks about 15th - right in the middle among all NBA coaches.

Is Karl ranked 15th among all coaches? I have Karl - when motivated - tied for ninth along with McMillan, Saunders and Carlisle, and behind (in no particular order) Jackson, Popovich, Brown, Rivers, Sloan, Van Gundy, Adelman and D'Antoni. Given that the coaches ranked first through ninth on my list are all locked up, giving Karl an extension deserves serious consideration. And here's why...

The Good: For both "The Good" and "The Bad" we'll look at the Madness that is King George through numbers, history and intangibles.

Numbers - From a regular season perspective, the numbers in Karl's defense speak for themselves. Not only does he have 933 wins (one of only 10 coaches in NBA history with 900 wins), but he has a very respectable career winning percentage of .592, better than five of the coaches ahead of him in wins. And in spite of his numerous playoff failures which we'll detail below in "The Bad," Karl ranks 12th all-time in playoff wins with 72 postseason victories.

History - Beyond the numbers, Karl deserves credit for resurrecting teams loaded with big egos upon arrival. In 1992, Karl inherited a .500 Seattle Supersonics team featuring Shawn Kemp and Gary Payton and guided them to 27 wins in their final 42 games and a playoff series victory. Following his debut season in Seattle, George Karl-led Sonics teams had 60-plus wins three times, never less than 55 wins and appeared in the 1996 NBA Finals, becoming the first Finals team ever not to get swept after being down three games to zero (of course they ended up losing in six). And after Karl was fired in May of 1998, the Sonics missed the playoffs four times in the next six seasons and didn't win another playoff series until 2005.

Karl leveraged his success with the Sonics into becoming the highest paid coach in NBA history when the Milwaukee Bucks hired him before the lockout-shortened 1998-99 season. Coming off seven consecutive postseason absences, Karl led the Bucks - featuring tough-to-coach personalities like Glenn "Big Dog" Robinson, Ray Allen and Sam Cassell - to three straight playoff berths, culminating with an Eastern Conference Finals appearance in 2001.

And Nuggets fans are familiar with what Karl has done in Denver since taking over the coaching reins in 2005. Unlike the Milwaukee situation, the Nuggets were already playoff ready but faltering. Coming off a spirited 43-39 record the season before, the Nuggets were off to a shaky 17-25 start that included two coaching changes and infighting among the players. Karl immediately righted the ship, guiding the Nuggets and their collection of huge egos like Carmelo Anthony, Kenyon Martin, Andre Miller and Marcus Camby to an all-time NBA best (over 40 games) 32-8 record and a playoff berth. And for a franchise that had made the playoffs only three times in 14 seasons before Karl was hired, Karl has led the Nuggets to five consecutive playoff appearances, including a Western Conference Finals appearance this past season.

Intangibles - George Karl coached teams, and Karl himself, thrive when the expectations are low, the egos big, and the franchise is in trouble. Karl is one of the few coaches out there who can deliver immediate results in those situations and the numbers - as noted above - prove that out. Additionally, those in the media who cover Karl closely have told me that he has one of the "top 10 basketball minds" in the NBA and that it's indisputable what a fierce competitor he is.

As 5280 magazine's Robert Sanchez - who wrote a terrific piece on Karl back in March - explained to me in his post-article interview with Denver Stiffs: "I look at George like a mechanic who takes your junk car and makes it drivable again. Maybe he’s not the guy who tunes the engine or puts on the special tires and rims, but there’s no shame in being a great mechanic. He won’t take your junk car and turn it into a Maserati, but he’ll turn it into a really good Toyota that you can drive for 200,000 miles and will keep a good resale value."

And let's not forget, entering what will be his seventh season as the Nuggets head coach, Karl is one of the most tenured coaches in the NBA right now. While I thought Karl should have been removed last summer after four straight playoff failures in Denver, there's something to be said for continuity. Karl has a great relationship with the Nuggets floor general, Chauncey Billups, and appears to have built a solid relationship with the team's two other alpha dogs, Carmelo Anthony and Kenyon Martin.

Whether Karl keeping his job in Denver was the result of a bad economy (i.e. the Nuggets weren't going to axe Karl, pay him out and hire another $3-plus million coach) or a loyal organization, we'll never really know. But no one knows these current Nuggets players better than Karl, and by finally turning in an effort on par with what we witnessed in 2005 upon his arrival in the Mile High City, Karl helped deliver one of the best seasons in Nuggets NBA franchise history. 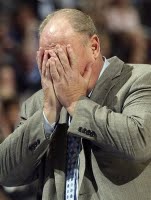 Numbers - While Karl has consistently produced regular season wins and playoff appearances (in 21 seasons of coaching, Karl has missed the playoffs just three times, with two of those absences coming in his first four years of coaching), he's been to just one NBA Finals and has lost more playoff games (89) than he's won (72). More alarming for Nuggets fans should be this number: 0-5. That's Karl's playoff coaching record in Denver when the Nuggets are facing elimination. In spite of their recent spate of success, Karl's Nuggets have never once won a back-against-the-wall, the-season-ends-tomorrow type playoff game.

History - More famously (or perhaps infamously), Karl has presided over some historic implosions when the expectations are highest. His 63-win 1993-94 Sonics became the first one-seed in NBA history to lose to an 8th seed, in spite of having won 21 more games than their opponent, the Denver Nuggets. And his Sonics followed up that dismal performance with another clunker in 1995 when his 57-win Sonics lost in four games to the 48-win Los Angeles Lakers. After impressively guiding his Milwaukee Bucks to the 2001 Eastern Conference Finals, Karl's 2001-02 Bucks lost 23 of their last 36 games - one of, if not the, biggest second half downfalls in NBA history. And more recently in Denver, Karl's 2007-08 Nuggets had 60-win potential and an $83 million payroll (remember all that 60-win optimism before the season began?) and delivered us nothing. Even though that team finished with a normally impressive 50 wins, they barely made the playoffs and never put up a fight in a sweep against the Lakers.

Intangibles - As documented in great detail on this site for two years now, Karl's intangibles are what drive the fans insane: refusing to work the referees, sitting through most games expressionless - especially against lesser opponents - until his Nuggets are down in the fourth quarter and then he gets up to work the sidelines, mind numbing substitution patterns (Karl's insistence on having the six-foot Anthony Carter on the floor to guard Kobe Bryant during the Western Conference Finals while Dahntay Jones rode the pine will forever remain a mystery to me), rarely calling timeouts - especially in the first half - to prevent opposing team runs, lack of set play calls (notably inbounds plays) and criticizing his players in the media while rarely - if ever - accepting blame himself.

Whether it's fair or not, from the fan's perspective Karl basically leveraged his solid Nuggets debut in 2005 into mailing it in for three straight years. And with the exception of this blog and a few voices in the Denver sports media, no one was calling Karl out for it. In a recent interview with SI.com's Ian Thomsen, Karl spoke candidly about those three seasons of disappointing results: "I'm not sure I was faking it, but the last couple of years I was confused. When a problem came up, I didn't know how to address it based on my experiences." I'm sure Stan Kroenke - having shelled out $83 million in payroll and another $13 million in luxury tax money in 2008 - was thrilled to read that.

Possible Replacement(s): We went through this exercise last season and at the time my vote was for Larry Brown (who, by the way, did a great job with the Bobcats this past season). Other candidates were Jeff Van Gundy (who alienated all of Denver for the rest of his life after admitting that he didn't follow the Nuggets last season and groveling over all things Kobe during the Western Conference Finals), Rick Carlisle, Nuggets legend and current Raptors assistant coach Alex English and Rocky, the Nuggets mascot. If I were to type up a list today, it would still include Van Gundy, English and Rocky, but I'd also throw in Avery Johnson and Celtics assistant Tom Thibodeau.

But unless Karl presides over a Bucks-like implosion with the Nuggets this season, I don't see him getting replaced anytime soon. 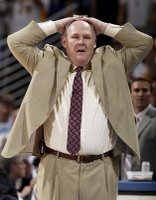 The Verdict: I already tipped my hand on this one when I wrote about the "5 Questions for the Offseason" and I'll stand by what I said then, which is to see how Karl and the Nuggets respond to their new found success before extending the coach. As noted above, historically Karl thrives when the expectations are low and has failed when the expectations are high, and entering the 2009-10 season the expectations for the Nuggets couldn't be higher. And with all the cash rich teams set with their respective coaches and Karl openly wanting to remain in Denver, I don't see the rush.

Furthermore, I could see the Nuggets going either way next season. On the one hand, I envision the Nuggets building on their recent success, turning in another 54-plus win season and marching back into the conference finals while giving the Lakers an even tougher fight as a now experienced team. On the other hand, a 2001-02 Bucks-type implosion wouldn't surprise me, either. In 2008-09, Karl and his players were fueled by having something to prove. What will they be fueled by in 2009-10? That's the coach's job to figure out.

If the Nuggets respond to success with more success next season - leading their division, on pace for at least a two-seed in the conference, etc - I say give Karl an extension around the All-Star break. Until then, why should the Nuggets lock themselves into a long term, expensive coaching contract that limits their flexibility should the Nuggets disappoint?