Share All sharing options for: The Nuggets offseason: Chris Andersen...

Now that we've detailed the possible acquisition opportunities out there for our Nuggets and the hard salary costs facing the organization this offseason, we can get back to reviewing current Nuggets and their future with the team. After kicking off this series with a look at Linas Kleiza's situation, we'll next move on to fan favorite Chris "Birdman" Andersen.

It should come as no shock to the readers of this blog that the guy who launched the www.bringbackbirdman.com petition wants Andersen back. (And yes, as promised I personally handed the petition to the Nuggets head of communications Eric Sebastian during the playoffs.) But, as mentioned before on this blog, the Nuggets must be careful to avoid a Jim McIlvaine and/or Jon Koncak situation. For those who don't get that old school reference, I mean that while the Nuggets should make every attempt to re-sign Andersen it doesn't mean they should overpay him.

So how much is the Birdman worth? Depends on your perspective, I suppose. Let's get into it... 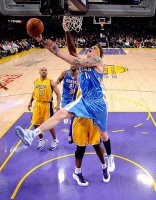 The Good: Rather than re-hash the five detailed arguments I laid out for re-signing Andersen when I launched the "Bring Back Birdman" petition in March, I'll give a quick synopsis of each here:

1) Andersen was the best backup center last season. Playing just 20.6 minutes per game, Andersen blocked 2.5 shots a night, second best in the NBA. He also contributed with 6.2 rebounds (which would translate into 10.9 rebounds if he played 36 minutes) and 6.4 points per night off excellent 54.8% shooting - thanks mostly to dunks and easy put backs. But his season averages don't tell the whole story. Excluding the meant nothing, season-ending game at Portland, when the Nuggets won 14 of their last 16 meaningful games Andersen averaged 7.8 points, 7.9 rebounds, and 3 blocks per game while seeing his minutes extended by about seven to eight per game.

2) Re-signing Andersen shouldn't be cost prohibitive. Given the current economic environment, Andersen's past transgressions with substance abuse and the fact that he's only good for about 20-25 minutes a night, the market for Andersen should be about $4 million a season for three seasons.

3) Andersen has a lot of game left in him. Even though he'll be 31 next month, he's missed almost three full NBA seasons and his career minutes per game is just 17:18.

5) Not re-signing Andersen is a slap in the face to Nuggets fans. For those who attend Nuggets games live, there's no way to describe the energy boost that Andersen brings to the team and the entire Pepsi Center crowd.

The Bad: A lot of what makes Andersen great for the Nuggets can also be detrimental to the team. While he's a shot-blocking machine, he's a little too obsessed with those blocked shots and thus is prone to foul trouble and falls too easily for opponents' head fakes. And much like his shot-blocking predecessor Marcus Camby, Andersen isn't a great stop defender like Kenyon Martin and Nene are. I wish I had data on whose shots Andersen actually blocks because I'd guess that he feasts off of unsuspecting guards and forwards more than opposing centers. Like Camby, Andersen blocks and alters shots as well if not better than anyone in the league, but when a skilled big man establishes position down low he often scores on Andersen with little resistance. We saw this routinely with the Lakers Pau Gasol and the Mavericks Dirk Nowitzki who had no problem making shots over Andersen. In fact, Gasol didn't have one game in the Western Conference Finals in which he shot less than 50% from the field.

I'm also slightly (emphasis on "slightly") concerned about Andersen's "Birdman" fame going to his head. After I believe the Nuggets 114-104 victory against the Jazz on April 2nd on TNT, Andersen - having blocked a career high eight shots that night - was interviewed. When the interviewer (I don't think it was Craig Sager but the other guy) laid out Andersen's stats and was off by a rebound and a made basket, Andersen corrected him on the points and rebounds. I know all NBA players are obsessed with their stats, but I've never liked it when a player is public about it. I used to hear rumors that after games, Camby would immediately check the stat sheet to see how many rebounds and blocks he had. I want players who care about W's, not their personal stats.

But the biggest negative about Andersen is more of a question than a true negative: how will he respond to a cushy contract? There's no question that - like many of the Nuggets last season - Andersen played great because he had to. He was on a one-year, $998,398 contract and was playing for his career. And that brings us back to McIlvaine and Koncak. NBA history is littered with backup centers who performed great in advance of getting a big contract but were awful soon thereafter. Is Birdman a bad contract waiting to happen or will he perform with the same unbridled energy that we've seen in the past? I think I have the answer when we get to The Verdict below.

Possible Replacement(s): I hate to even think about Andersen not being in a Nuggets uniform next season and having another backup center in his place, but the NBA is a business and I'm sure the Nuggets are exploring a variety of offseason scenarios to improve the team. Since the Nuggets lost Game 6 of the Western Conference Finals, readers of Denver Stiffs have been throwing out an assortment of names, each of whom theoretically could be the next Nuggets center. Many of whom - ranging from Rasheed Wallace to Chris Wilcox to Marcin Gortat - would have to be acquired at the expense of re-signing Andersen, who can only be re-signed with mid-level exception money since he's coming off a one year contract. Others - ranging from Andrew Bogut to Chris Kaman to Marc Gasol - would have to be acquired via a major trade, most likely, at the expense of Nene. The point is that it will be virtually impossible for the Nuggets to retain their core of Nene, Andersen and K-Mart and add an impact player at the center position. To bring in such a center, one of those three would have to go, and thanks to K-Mart's onerous contract it probably won't be him.

So, worst case scenario, if the Nuggets don't acquire an impact center by using their mid-level exception or parting with Nene and they aren't able to re-sign Andersen because he takes a big contract elsewhere, the scrap heap for backup centers available via free agency includes the Nuggets own Johan Petro, Zaza Pachulia, Mikki Moore, Aaron Gray, Lorenzen Wright, Theo Ratliff, Ryan Hollins, DeAndre Jordan, D.J. Mbenga, Rasho Nesterovic, Joel Anthony, Stromile Swift, and my former high school accounting class partner Michael Ruffin. As I told a friend of mine who's about to have a baby girl, have fun with that.

The Verdict: If the Nuggets can re-sign Andersen for about $4 million per season for the next three seasons, it's a no-brainer. And if you're concerned about this potentially being a bad contract, allow me to refer you to his pre-drug incident tenure with the Hornets. Coming off a $639,000 contract with the Nuggets (after making $288,171 in his first year with the Nuggets and just $512,435 in his second), the Hornets signed Andersen to a multi-year, multi-million dollar contract that paid him $1.6 million in his first season with the team and was due to pay him $3.5 million in his second season (according to Basketball-Reference.com). Before he was banned for violating the NBA's substance abuse policy in January 2006, Andersen was a producer for the Hornets averaging 7.7 points, 6.1 rebounds and 1.5 blocks per game in 21.3 minutes of playing time in 2004-05. Numbers similar to what Andersen did in Denver this past season.

Moreover, even if the Nuggets were to part with Nene or K-Mart to acquire a big time center, they'd still need Andersen to backup that center and fill in at power forward, as well. One thing not noted in "The Good" segment above was how well Andersen finishes around the basket, even when he's not dunking. And for those who get to Pepsi Center early before games, you always see Andersen taking extra warm shots with the assistant coaches while most of the Nuggets are nowhere to be found. Could he be developing a mid-range jump shot, as well? 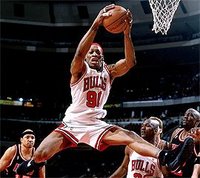 At about $4 million a season, I'd be willing to gamble that the soon-to-be 31 year old Chris "Birdman" Andersen has three solid seasons left in him, possibly four. The player Andersen is most often compared to is Dennis Rodman. At 31 years old, Rodman averaged 18.3 rebounds per game (playing 40 minutes a night). At 32, 17.3. At 33, 16.8. At 36 years old and playing in his last full NBA season, Rodman pulled down 15 rebounds a night in almost 36 minutes of playing time. And Rodman was a relentless partier, something Andersen allegedly no longer is.

With the economy still in shambles and free agent signings (in theory) expected to be more reasonable this summer, I expect to see the Birdman flying again in a Nuggets uniform in 2009-10 and a few seasons beyond.