Share All sharing options for: The Nuggets offseason: Anthony Carter... 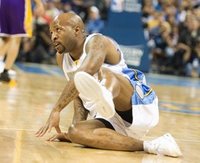 With the Nuggets trading for UNC point guard Ty Lawson in last Thursday's NBA Draft, the timing couldn't be better to discuss whether or not the Nuggets should re-sign backup point guard Anthony Carter. For an assortment of reasons that will be detailed below, A.C. has become a lightning rod for criticism on this blog and among most Nuggets fans that I talk to, and I've never believed this to be totally fair. So before jumping right to the comments section to voice your opinion on why the Nuggets shouldn't re-sign A.C., here's the case for and against the 10-year veteran.

The Good: Keeping in mind that Carter made "just" $1.26 million last season, there's a lot to appreciate about him. Even with his minutes cut down by six from his 28 minutes per game peak of 2007-08, Carter put up solid numbers in points (5.3), assists (4.7) and steals (1.2). Additionally, as he's done since arriving in Denver right before the 2007 playoffs, Carter never takes a night off and provides an instant energy boost off the bench. Carter may get careless with the basketball (more on that below), but you can never accuse A.C. of not giving his all.

A recent notable example of A.C.'s upside would be his performance against the Mavericks in the second round of the playoffs. In Game 1, A.C. scored 12 points on six-of-eight shooting, had four assists and two huge steals which led to easy layups, sparking a blowout victory for the Nuggets. And in the closeout Game 5, with the Nuggets looking sluggish and allowing the Mavericks to hang around into the third quarter, A.C. came off the bench and had two quick offensive rebound put-backs that the Mavs didn't see coming. A.C. finished Game 5 with eight points on four-of-six shooting to go along with five rebounds and three assists. And he did all that in just 17 minutes of playing time.

Beyond the numbers and never-ending hustle, A.C. has earned the trust of his head coach (more on this in "The Bad" below) and teammates, and has never once complained about his minutes or his role, which has changed from bench warmer to backup to starter and back to backup.

And again, let's not forget the price tag. With five Nuggets - Carmelo Anthony, Kenyon Martin, Chauncey Billups, Nene and J.R. Smith - eating up about 85% of the pre-luxury tax payroll, the Nuggets aren't going to have a multi-million dollar backup point guard like Earl Watson or Steve Blake. $1.26 million a season doesn't excuse Anthony Carter from performing under par off the bench, but it does put his respectable numbers and fairly solid nightly performances in perspective.

The Bad: I've written a number of times that you can't be critical of A.C. without being critical of the man who plays him too many minutes, insists on playing him side-by-side with another undersized guard and regularly puts him in situations that don't suit A.C.'s skills (like inbounds plays). That man, of course, would be George Karl. Karl's "old school" approach to the game which includes rewarding veterans like A.C. with ample playing time may be admirable to some, but it often bites Karl - and thereby the entire Nuggets team - in the ass. And in regards to A.C. specifically, this has been going on for two straight seasons now.

There are countless examples of Karl inserting A.C. into games in situations that make absolutely no sense. Most recently, Nuggets fans everywhere collectively cringed when Karl would sub the 6'2" (that's generous) A.C. in for Smith to play alongside the 6'3" Chauncey Billups and be asked to defend the 6'6" Kobe Bryant throughout long stretches of the Western Conference Finals. I don't have the numbers on exactly how many points Kobe scored when A.C. was guarding him, but for the second straight postseason Kobe torched A.C. If Kobe didn't score easily over A.C., then he easily found an open man to pass to because A.C. simply can't do anything in defense of Kobe (few can, but A.C. literally had no chance of succeeding). And Karl's most ludicrous decision of the WCF was when he chose the diminutive A.C. to throw in a crucial inbounds pass while being guarded by the 6'10" Lamar Odom in the closing moments of Game 1. We all remember what happened there.

Even though there wasn't a third viable point guard (apologies to Jason Hart) to insert into the rotation last season, Karl played A.C. way too many minutes. For about 10 minutes a game, A.C. is fine. Once you get north of 10 minutes, the results diminish and that leads us to another negative on A.C. - turnovers.

For whatever reason, after he's been on the floor a while A.C. gets a little too comfortable and starts throwing "touchdown" passes that rarely materialize into anything other than a turnover. You know what these passes look like. The Nuggets are on a nice run, they pull down a big offensive rebound, Melo leaks out ahead of the defense and A.C. throws the pass...into the stands. A.C. also has a propensity to throw the ball right to opposing players while trying to make an ill-timed alley-oop pass that his own teammates often aren't expecting. As I stated a few months ago, if J.R. Smith is "The One Man Comeback" than A.C. could be nicknamed "The One Man Turnover." In a quarter of the games A.C. played in 2008-09, he turned the ball over at least three times which basically equates to one turnover per seven minutes of playing time in those games.

I should also call out A.C.'s shooting as another negative. He's a career 40.4% shooter and an even worse 23.8% shooter from behind the arc, but he only shoots one three-pointer a game. To his credit, though, A.C. has been known to make timely jump shots when he shoots in rhythm. But he gets in trouble when he's forced to put up a shot after standing around. 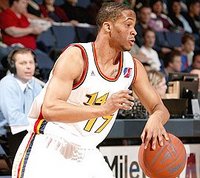 Possible Replacement(s): This question has already been answered somewhat with the Lawson acquisition, but by bringing in Lawson doesn't mean A.C. is gone. In fact, I bet it's quite the opposite. With Lawson set to make about $1.5 million (not too much by NBA standards, even with the Nuggets being capped out), bringing back A.C. for about $1.3 million will fit into the Nuggets salary projections. This doesn't mean the Nuggets shouldn't be looking for a steal elsewhere, however, but to do so we're talking bargain basement shopping.

The "bargain bin" of backup point guards include names of former first and second round draft choices who thus far haven't been able to hack it in the NBA, such as Taurean Green, Mateen Cleaves, Marcus Williams, Dee Brown, Dan Dickau and so on. Williams is my favorite on that list, but I'm not sure what his situation is with the Warriors. Although according to HoopsHype.com, Williams is an unrestricted free agent and the Warriors don't have any team option or qualifying offer rights to him.

So unless the Nuggets are insistent on going really cheap (i.e. less than $1 million for their third point guard), expect to see A.C. back in training camp.

The Verdict: I hate to go against almost all of my readers' wishes, but unless the Nuggets can find a better backup point guard for less than $1.5 million, I'm for bringing A.C. back for three reasons.

First, there's no guarantee that Lawson is going to pan out. While we're all thrilled with the acquisition and see a lot of upside, Lawson could also be added to that list of "short point guards who didn't pan out" like Green, Brown, Williams and Cleaves, all of whom had awesome college careers. To be fair, Green, Brown and Williams are young enough that we could still see them as productive NBA backup point guards. But I think the jury is in on Cleaves.

Second, spending $1.3 million on A.C. is a cheap (relatively speaking) way to pacify Karl who's going to be coach next season whether he gets extended now or not. Karl has publicly stated numerous times that he wants A.C. back, so if the Nuggets give Karl his wish on this roster spot, maybe that buys them a future acquisition to push through over Karl's objections (as he's had in past roster decision squabbles with Nuggets management).

And third, what's wrong with a little backup point guard controversy? A lot of Nuggets fans have voiced their displeasure with Karl already stating that Lawson will need to "prove that he's got to play sometime". But since when should the backup point guard spot - or any roster spot for that matter - just be handed over to a rookie? If by having to compete with A.C. for the number two point guard slot makes Lawson work harder, focus more, play better, etc, than so be it.

That being said, if Lawson performs admirably in summer league, training camp and during the preseason and Karl refuses to play him over A.C. (as we saw with J.R. Smith up until the second half of last season), I'll be the first to call Karl out for such an absurd decision. But before we get into the A.C. vs. Lawson debate, let's see how Lawson performs.

Best case scenario, Lawson turns out to be a solid pro right away, a la Mario Chalmers last season. This means Billups' playing time could be reduced from 35 minutes per game down to maybe 31 or 32, Lawson steps in for 15-18 minutes and A.C. gets a few garbage time minutes.