The Nuggets traded their future, overly protected first round pick via the Bobcats to the Timberwolves for UNC's Ty Lawson. So it looks like we got our backup point guard after all and a damn good one at that. Lawson was almost good enough to come out last year, but stayed in college for one more year, improved his game and brought home the NCAA Championship in commanding fashion. This guy's a winner.

Moreover, Lawson's addition signifies that the Nuggets recognize Anthony Carter is no longer the permanent solution at backup point guard. And, of course, being a UNC "grad," Lawson may actually see some playing time under George Karl whose inherit bias against rookies likely doesn't apply to players from his alma matter. Good trade! 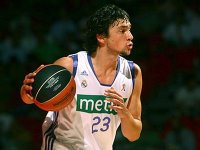 Even though ESPN failed to broadcast it on the air, the Nuggets officially drafted Spain's Sergio (who?!) Llull with their second round pick (as predicted by HoopsWorld earlier today). In other words, the Nuggets got the Spanish point guard NOT named Ricky Rubio and, to add insult to injury, passed on DeJuan Blair in the process.

But - ESPN just announced that the Nuggets have sold the rights to Llull to the Houston Rockets for "cash considerations," meaning they were never drafting Llull for themselves. I'm hearing that the Nuggets got back a substantial amount of cash for this pick, but only time will tell to see a) if that cash enables the Nuggets to make another big move and b) if passing on Blair was a bad decision or not.