Share All sharing options for: The first ever Denver Stiffs draft recap...

This blog isn't old enough to have had an NBA Draft Recap column. In fact, prior to tonight you'd have to go back to 2006 to even evaluate a Nuggets draft pick. That year, the Nuggets took Leon Powe 49th and promptly traded him to the Celtics for a future second round pick (which in a roundabout way turned into J.R. Smith via Chicago).

As a result of this prolonged absence from participating in the draft, the post-Kiki Vandeweghe Administration of Bret Bearup, Mark Warkentien and Rex Chapman has been accused annually (by yours truly among others) of being lazy with the draft and not properly valuing it. Having no first round pick in 2006 wasn't the present administration's fault as that pick was dealt to the Nets as part of the Kenyon Martin trade, foolishly orchestrated by Kiki. And having no pick in 2007 was understandable in that the pick had been traded to the Sixers in order for the Nuggets to acquire Allen Iverson (a trade most Nuggets fans - including this one - whole heartily agreed with at the time).

But last year, with the Nuggets having just been swept by the Lakers (who have benefited greatly from deft late round drafting) and sitting at 20th in a seemingly deep draft, reached a new level of disappointment when the Nuggets brass dealt the pick to the Bobcats for an overly protected future first round pick. By doing so, the Nuggets passed on Ryan Anderson, Courtney Lee, Nicolas Batum, Darrell Arthur and Mario Chalmers.

I don't want to dwell on the past but rather give Thursday night's welcome acquisition of Ty Lawson some context. First off, by proactively inserting themselves into a draft that they didn't have their own first round pick in, the Nuggets brass dissuaded some of the fears that they're content to sit these drafts out each summer. The bottom line is that grabbing Lawson now for that overly protected Bobcats pick was a good move. As noted in the initial recap of the trade, Lawson at 18th overall might be a steal. He's tough, he's a winner and he's thrived against the absolute best that college basketball has to offer. As a junior at the University of North Carolina, Lawson averaged 16.6 ppg on 53.2% shooting to go along with 6.6 apg and 2.1 spg. In fact, Lawson impressively never shot worse than 50% from the field in college. 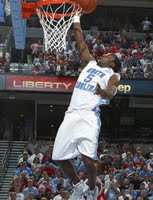 Furthermore, he addresses one of the Nuggets most glaring needs - backup point guard (sorry, Anthony Carter, but your ultimate replacement has arrived) - and (even though this shouldn't be the case) by having a North Carolina pedigree Lawson is one of the rare rookies who might see playing time in Nuggets coach George Karl's "rotation." And lest we forget who Lawson's mentor is going to be. None other than Chauncey Billups, one of the top five point guards in the entire NBA.

That being said, there are some negatives associated with Lawson, as well. He's less than six feet tall, has an awkward and somewhat slow released jump shot and allegedly has a poor wingspan (incidentally, "wingspan" was ESPN's Jay Bilas' favorite word of the night during the draft). Therefore, while his upside might be akin to other successful, short but stocky point guards like Mookie Blaylock, Terrell Brandon or Tim Hardaway, his downside could be akin to Mateen Cleaves or Khalid El-Amin.

My prediction is that Lawson falls somewhere in between the names noted above and works himself into a solid backup point guard for years to come.

Based on the comments that came into the Denver Stiffs Virtual Chat and the ongoing post during the draft, Nuggets Nation seems almost universally behind the Lawson trade (although I did appreciate one of the comments in the chat suggesting he'd rather the Nuggets have just taken Chalmers last year in the first place).

What the Nuggets did with their second pick - 34th overall - however, has proved to be more controversial.

With the euphoria over the Lawson acquisition still lingering, Nuggets fans everywhere couldn't help but notice that when the first round concluded, some notable names were still available: Sam Young, DeJuan Blair, Derrick Brown, Jodie Meeks, Chase Budinger, Danny Green and Nick Calathes. But the name that stood out the most on that list was Blair, who led his University of Pittsburgh team to a number one seed in the NCAA tournament, dominated in the always tough Big East conference and had previously been projected to be a lottery pick. And when the Kings took Jeff Pendergraph at 31, the Wizards took Jermaine Taylor at 32 and the Blazers took Dante Cunningham at 33, the going assumption was that DeJuan Blair would be the next Nugget and the real steal of the draft. And then ESPN cut to commercial and came back a couple picks later. What the - ?!!

Scrambling online to find who the Nuggets picked during the unending commercial break, the Tweets and Virtual Chat posts came in fast and furious: the Nuggets had drafted an unknown Spaniard named Sergio Llull (kudos go to HoopsWorld who accurately predicted this earlier in the day). Since drafting Llull for the purposes of him joining the Nuggets - with Blair and so many others still available - made absolutely no sense, I immediately did some calling, texting, emailing and digging and found out that the Nuggets were just drafting Llull for the Rockets, to whom they had sold the pick (and this no joke) for an NBA record $2.25 million for a second round pick. And from what I'm hearing, that $2.25 million will be applied directly to re-signing Chris "Birdman" Andersen.

On a side note, I can't wait for about seven to nine years from now when the name "Sergio Llull" will completely escape me when asked: name who the Nuggets drafted in the second round of 2009.

So before we make an early call on passing on Blair or the others, we must ask ourselves: does an NBA record sale of a second round pick in order to give a franchise that loses millions annually some financial relief so they may re-sign the best backup center in the league not named Zydrunas Ilgauskus who also happens to be a fan favorite better than taking a flyer on Blair? (How's that for a run-on sentence?)

Given the Nuggets current roster and financial situation, the answer is probably yes for two simple reasons. One, Blair would get no playing time under Karl. And two, the Nuggets needed the financial boost to sign Lawson, re-sign Andersen and possibly make a run at re-signing Dahntay Jones, too. 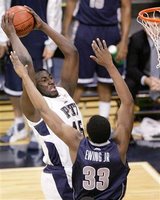 That being said, I hated seeing the Nuggets pass on Blair, degenerate bad knees or not. I've just always wanted to see the Nuggets be the team that scores one of these undersized but awesome college power forwards who slip into the late first or second round and prove everyone wrong (hence why I advocated for D.J. White last year who did nothing in his rookie year but it's too early to call him a total bust). Of all the draft picks the Nuggets have made in my lifetime, they've never scored one of these guys. Not one. The closest would be Jerome Lane drafted 23rd overall in 1988, but Lane (coincidentally a Pittsburgh alum like Blair) only played five NBA seasons, three-plus with Denver.

Making matters worse, the Spurs of all teams picked up Blair, which means if he's destined to be another one of those Leon Powe / Paul Millsap / Carlos Boozer / Glen Davis "I can't believe this guy slipped into the second round" type power forwards, it will be the Spurs who reap the reward. And making matters even worse, while I hate all things Spurs I can't in good conscience root against Blair who I hope proves the doubters wrong and becomes a solid pro. I feel dirty already.

But at first blush, the Nuggets draft night can be called a success. They picked up a solid backup guard in Ty Lawson who can be plugged into the "system" right away. And they bought themselves additional financial relief to help re-sign their top free agent, Chris Andersen.

Here are some additional quick observations from a busy draft night/week...

...if the Knicks were so hell bent on drafting Stephen Curry, why didn't they make a deal with the Warriors to move up one pick? The Warriors don't know what they're doing and were just going to take the best available player, regardless of position.

...regardless of how former sports writer (there's hope for me after all!) turned TV executive turned Timberwolves GM David Kahn spins it, drafting Ricky Rubio and Jonny Flynn - both point guards - makes absolutely no sense. I'll give Kahn this, however: when interviewed he takes "The Most Condescending and Most Defensive NBA Executive Award" away from the Nuggets Mark Warkentien. It's not even close.

...by adding Tyler Hansbrough to a team already featuring Troy Murphy, Mike Dunleavy Jr., Travis Diener, Jeff Foster and Josh McRoberts, the Pacers have built an NBA Finals-caliber team...for 1951. I know Pacers President of Basketball Operations Larry Bird wants to shed the team's "gangsta" image from recent years, but he's going a bit overboard. Besides, the Jazz would love to have at least half these guys. (Alright, enough with the white guy jokes.)

...The Richard Jefferson trade is great for the Spurs. As magical as the Nuggets 2008-09 run was, lest we forget that an injury-riddled Spurs team tied the Nuggets in regular season wins. If Spurs coach Gregg Popovich hadn't thrown one of his team's games against the Nuggets, the Spurs may have gone to the conference finals in spite of those injuries. Now San Antonio has Jefferson, will likely get Bruce Bowen back and has added Blair in the draft. Unless the Nuggets make a big move, look for the Spurs to reclaim their title as the West's second best team.

...Shaquille O'Neal going to the Cavaliers is great for the Nuggets. Instead of nine Western Conference teams competing for eight playoff slots as we saw last season, only eight will be in the running this year as the sun sets on the Suns. Additionally, a George Karl coached Nuggets team is yet to win in Phoenix and I have a hunch that's going to change next season. Thank you, Steve Kerr, for your two years of outstanding work.

If this week was any indication, we're in for a summer full of deals for the Nuggets and their Western Conference rivals. And fortunately for us, the Nuggets are one of the few franchises that aren't in dire straits financially (thanks to an owner who's willing to spend - up to a point - to keep Denver competitive in spite of incurring those annual losses).

It's an exciting time to be a Nuggets fan.