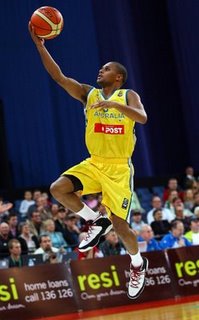 Now that we've set forth the rules for drafting in the second round, let's consider who the Nuggets should/could actually pick up on Thursday night. What makes the Nuggets pick - 34th overall - so intriguing is that they're in position to pick up a first round caliber player, a la a Mario Chalmers from last year or a Glen Davis from 2007.

This happens for a couple reasons. First, a lot of teams that draft late in the first round purposely select foreign players they know won't be eligible to play in the NBA immediately - i.e. so they don't have a first round salary on the books for the coming season. And second, teams drafting late in the first round have the same propensity to gamble on high risk, often no reward prospects as teams drafting in the second round. So you see a lot of unknown foreigners or big men with "tremendous upside if he puts in the work" taken late who never materialize into decent pros.

Therefore, the draftees who get the shaft and get sent to the second round tend to be the "tweeners", "hybrid guards" and "one-dimensional" shooting guards we discussed in Part 1 of this Draft Preview. If you'll pardon the Nuggets-related pun, could there be gold to be had in the second round if mined properly? According to the various mock drafts out there, the answer is yes. So let's first look at who the Nuggets themselves have been working out and then - after reviewing the mock draft forecasts, the rules for drafting in the second round and looking at the Nuggets needs - we'll make some predictions and recommendations (assuming the Nuggets don't trade the pick)...

According to HoopsWorld.com and NBA.com, the Nuggets - along with a host of other NBA teams - worked out 21 college and foreign players from June 1-3 in Oakland. Among those who worked out for the Nuggets, the following players of note could be available when the Nuggets draft 34th on Thursday night (note that when I say "could be available," I'm basing this off of the mock drafts according to ESPN.com, DraftExpress.com, NBADraft.net and HoopsWorld.com)...

In addition to that select group of players, the Nuggets allegedly brought in an additional 15 players for a private workout in Colorado Springs last Friday and Saturday. (On a side note, kudos to fellow Nuggets blogger Roundball Mining Company for putting out the list and it deserves asking: why didn't The Denver Post publish this online? Unless the Post was sworn to secrecy by the Nuggets organization or published this list in their print edition only, this is unacceptable "coverage" of the Nuggets. I might have to - gulp - imitate a real journalist pretty soon if the Post continues to under perform with their Nuggets coverage.)

But of those 15 players recently worked out by the Nuggets, almost none are projected to be draft-worthy at all, with the following three exceptions...

Now let's apply the rules for drafting in the second round, and see who the Nuggets should be considering...

Rule #1: Draft a guy who contributed to meaningful wins at a major college.

Almost all of the players in question fit this description, but certainly Collison, Ellington, Price and Summers would be at the top of the list in terms of having experienced big time, high pressure games on the grandest of stages and against the best possible competition short of the NBA or the Olympics. I'd throw in Mills, as well, who has had the invaluable experience of playing in the Olympics (more on that below).

Rule #2: If you're going to go international, make sure you've seen the player play in person.

Looking at the workouts only, it seems as though the current Nuggets brass may have learned from the mistakes of their predecessors and are staying away from international players who didn't play college basketball in the US. And having Casspi on the list above is a stretch as all the mock drafts have him going late in the first round and well ahead of 34.

Rule #3: Put a premium on work ethic and character.

I can't speak to this on any of the players above. But if the Nuggets are doing their homework right they're investigating each of their prospects work ethic and character thoroughly. This would include talking to former coaches, college teammates and opponents, family members and trying to gather as much information as possible about a player's character during the workouts themselves. The Nuggets have done a good job moving away from Jailblazers 2.0 and morphing into a team that the Denver community could proudly get behind. Whomever they draft on Thursday (again, if they actually draft) should continue that process of putting character and work ethic over raw talent. I don't want to see another player even close to resembling DerMarr Johnson in a Nuggets uniform ever again.

Before getting to my pick, let's do a quick overview of the Nuggets needs and the reality of this player getting into the rotation. Needs-wise, the Nuggets should be looking at backup point guards and backup power forwards. While it would be great to score a seven-footer in the second round, that's wholly unrealistic. Furthermore, Nuggets head coach George Karl rarely - if ever - plays late first round or second round rookies at all and especially if they're perceived as one-dimensional shooting guards (see Wafer, Von). So that probably eliminates players like Calathes, Ellington or Thornton being drafted by the Nuggets.

The only chance a new Nuggets draftee has of seeing some playing time under Karl is if he fills an actual need. So unless a "you'd be a moron not to draft this guy this late" like Tyler Hansbrough or Chase Budinger miraculously falls into the second round of the draft, the Nuggets should be all point guards all the time when pick #34 comes due.

According to the mock drafts I've been studying, the point guards shake out (on average) as follows in order beginning with the most preferred: Maynor, Collison, Mills and Price. According to Denver Stiffs rules for drafting in the second round, Maynor would actually be least favorable as he didn't play against premium competition in college. But since Maynor is universally projected to not be available by 34, this will likely be a moot point. 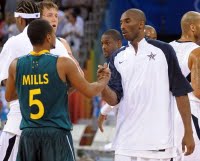 That leaves us with Collison, Mills and Price but like Maynor, Collison is almost universally projected not to be available. So between Mills and Price, who would you prefer to see in a Nuggets uniform in 2009-10? Even though I received an impassioned plea from Connecticut-based Denver Stiffs reader Andrew Porter (who writes the blog TheUConnBlog.com) on behalf of Price and Price was the only player to be worked out by the Nuggets twice this month, I like Mills. I know he's undersized by NBA standards and I must confess that I didn't see him play much at St. Mary's. But I did get to watch him play for his Australian national team against "The Redeem Team" in the Olympics last summer and was quite impressed. In their quarterfinals matchup, Mills put up 20 points going head-to-head with Jason Kidd (not saying much), Chris Paul (impressive) and Deron Williams (equally impressive). And supposedly he's been making waves at the pre-draft camps with his quickness and work ethic. Plus, this blog has a number of loyal readers from Australia who I know would be thrilled to have an Aussie playing NBA basketball in Denver.

Maybe the Nuggets will get lucky and find Collison - who shot a lot better than Mills in college and dished out more assists - on the board. But if Maynor and Collison are gone and Mills hasn't been selected, Denver Stiffs is endorsing Mills to be the Nuggets next backup point guard.

And now that I've done all this work, the Nuggets can trade the pick...