Share All sharing options for: When friendship trumps basketball... 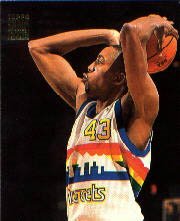 Back in October, one of the best friends I’ve ever had in my life asked me to officiate his wedding in Oshkosh, Wisconsin (his bride-to-be's home town) on May 9th. I was honored and immediately said yes. And right after we got off the phone, I grabbed my 2008-09 Nuggets schedule to make sure that the wedding wouldn’t conflict with the season. When I saw that the wedding would take place after a possible first round Game 7 could occur, I let out a big sigh of relief. Because even though I was convinced that the Nuggets would make the playoffs, I was equally convinced that they weren’t winning their first playoff series in 15 years. Not this year.

But as the season went on and Chauncey Billups became a Nugget again and the wins became much more routine than the losses, I couldn’t help but wonder daily: "How many playoff games am I going to miss because of the wedding?!" And even resorted to more self-centered thoughts like: "Maybe he wouldn’t mind if I just performed the ceremony at his next wedding?" After all, you can get married as many times as you want, but the Nuggets only have meaningful playoff runs once every 15 years. Right?

So when the regular season was nearing its end, I had a good deal of additional incentive to root for the Nuggets to finish with home court advantage through the first two rounds. The thinking was that if the Nuggets finished second in the Western Conference and had the right matchup, their first round series would be wrapped up quickly. And – if we got lucky – the road games of their second round series would take place during the wedding. In other words, at a minimum I wouldn’t miss any home playoff games.

And while almost all of Nuggets Nation is justifiably angry about the Nuggets/Mavericks playing Game 3 an absurd four days after Game 2, this Nuggets fan is quietly happy about it because it means I’ll only miss watching Game 3 and none of Game 4, to be played Monday night. (On a side note, I’m already working back channels with the bride-to-be’s brother to get us TV access during all the pre-wedding rehearsal stuff on Saturday. Because of the 4pm CST game start time with the wedding beginning at 5pm, I’ll be lucky to catch the entire first quarter. And I’m assuming I can’t be late to a wedding I’m performing.)

Justin and I have been friends since the second grade and Nuggets fans even longer than that. Growing up in Denver, we’ve watched countless Nuggets games together, both on TV and in person. I also remember going together to the Nuggets annual meet-the-team party, the highlight of which was when Justin got his all-time favorite Nugget’s autograph one year. That would be Kevin Brooks (pictured above).

Justin and I were also together when we watched our 8th seeded Nuggets pull off the greatest upset in NBA Playoff history (at that time) by defeating the 1st seeded Seattle Supersonics in 1994, and were together again when those same Nuggets let us down in Game 7 against the Utah Jazz in the following round. And we watched about seven straight NBA Drafts together, cheering when the Nuggets drafted Dikembe Mutombo, booing when they took Mark Macon over Stacey Augmon.

And of course we’d attend the annual state championships at McNichols Arena to watch our Cherry Creek high school team get its ass-kicked by Chauncey’s George Washington squad each spring.

We’ve gone our separate ways since high school – Justin went off to college in Arizona, has lived in about five major U.S. cities and has since settled back in Arizona while I went to college in Atlanta, then moved out to Los Angeles and now split my time between Denver and LA – but have always kept in touch. That’s what best friends do. More recently, we went to the All-Star Game when it was in Denver a few years ago and had a blast. We crashed Carmelo Anthony’s party, the Sports Illustrated party and even got to throw back a few drinks with Charles Barkley on his birthday. A year later, Justin treated me to the AFC Championship Game at Invesco Field and as all Broncos fans know all too well, we didn’t have a blast that day.

If I need expert opinion or insight on the Broncos, I always ask Justin first (he’s the kind of guy who knows every player in the NFL Draft before the Broncos scouts do). And if he needs to know anything related to the Nuggets, guess who he asks? And as anyone who's ever watched a Nuggets game with me knows, my phone buzzes constantly with text messages from Justin that usually say things like "I can't believe J.R. just made that shot!" or "Why won't Melo take the ball to the f---ing hole?!!" or "Why isn't Karl calling a timeout?!!" Sports has a funny way of keeping you in touch with your childhood friends forever.

25 years of friendship will culminate this Saturday in Oshkosh when I officiate his wedding. It will take all of my will power not to sneak a peek at the Game 3 score on my Blackberry at some point during the ceremony. But my hunch is that that wouldn’t go over well with the 300 or so people staring at me and the Blackberry might have to stay in my hotel room. So for the first time ever, I won’t be watching a Nuggets playoff game in its entirety. I guess that's what friends are for.

At least it’s a road game.