When the facts change, I change my mind (Nuggets/Lakers Series Preview mulligan)...

Share All sharing options for: When the facts change, I change my mind (Nuggets/Lakers Series Preview mulligan)... 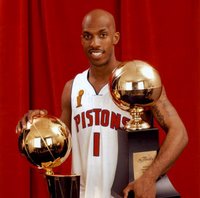 "When the facts change, I change my mind. What do you do, sir?"

So said British economist John Maynard Keynes when replying to criticism of having changed his position on monetary policy in regards to the Great Depression.

I've taken a lot of criticism today for picking the Lakers to beat our Nuggets in seven games, and that criticism is completely justified. A lot of this blog's readers have made their points known in the comments of the series preview, although they've been remarkably polite about it. Others have emailed me with much more anger. And a few have called to blast me in person.

While the facts haven't necessarily changed since making my prediction on Sunday afternoon, I've revisited the facts that I should have focused on initially and thus, I have changed my mind. Even though I spent hours yesterday breaking down the Nuggets/Lakers Western Conference Finals, I overlooked some simple things staring me right in the face while putting too much emphasis on past results. In other words, I over thought my prediction.

First off, as loyal Denver Stiffs reader "Bee" aptly pointed out in the comments section, I'm reading too much into the Nuggets/Lakers April 9th matchup. Even though the Nuggets entered that game having won eight straight and 13 of 14 games, they weren't playing nearly as good of basketball as they're playing now. During that 14 game stretch, the Nuggets allowed the lowly Grizzlies, Wizards, Warriors, Knicks and Thunder to creep back into games that should have been total blowouts. Something that hasn't happened once in the postseason. And their defense wasn't particularly great in those games, either, as each of those teams scored more than 100 points. In fact, that Thunder game - which should have been a walkover - pushed the Nuggets enough that their energy entering that Lakers game the following night wasn't what it should have been. The bottom line is that the May 18th Nuggets are dramatically better than the April 9th Nuggets, notably on the defensive end of the floor.

Second, as my friend (and Lakers fan) Adam pointed out to me at lunch today, in Chauncey Billups and Carmelo Anthony, the Nuggets have two of the three best players in this series. And as I mentioned in my initial series preview, one of those two players - Chauncey - has won a championship ring more recently than Kobe Bryant has. And while we're on the topic of Chauncey, as good as he was during the regular season, he's been even more potent in the offseason, averaging 22.1 ppg on 49.2% shooting to go along with 7.3 apg and just 1.7 turnovers per game, compared to regular season averages of 17.9 ppg on 42% shooting, 6.4 apg and 2.3 turnovers per game. Conversely, I encourage readers to check out J.A. Adande's analysis of Bryant's performances in his past five playoff elimination games. Oh, and about that second best player in the series? After a string of dreadful shooting performances against the purple and gold, Melo is overdue for a great series against the Lakers. Now that Melo has learned what it takes to win multiple playoff series, I don't foresee seeing the same timid, cautious, unsure Melo that we've seen against the Lakers in the past.

Third, ESPN.com's John Hollinger does a great job in his breakdown of the Western Conference Finals explaining how the Lakers peaked early but how the Nuggets have basically played them even since the All-Star Break. And through the postseason thus far, it hasn't even been close. While the Lakers struggled mightily against a CBA-caliber Rockets team, the Nuggets would have swept a red hot Mavericks team had Dirk Nowitzki not put on one of his best ever playoff performances in Game 4 at Dallas.

Fourth, back to that whole "emphasis on past results" thing. Sports can be a lot like the stock market or roulette - i.e. just because something happened over and over again in the past (like the Nuggets losing 10 of their last 11 to the Lakers), doesn't mean it's determined to happen again in the present/future. And presently, the Nuggets are not only playing the best basketball in the NBA but they're well rested to boot. Presently speaking, it can't be underestimated how dreadful the Lakers were against the Rockets. For a team that averaged 106.9 points per game in the regular season, they only broke 100 three times against the Rockets and only once when the Rockets didn't have Yao Ming on the floor. And even though they were the bigger, deeper, stronger team, the Lakers allowed themselves to get pushed around.

Fifth, if you look historically at who wins NBA titles, it's not just the hottest team but the deepest and toughest team with the most personality and best off-the-court camaraderie (hence why Boston marched all the way to the championship last year). The Nuggets have all five traits in their favor against the Lakers: they're hotter, deeper, tougher, have more personality and genuinely care about each other more than the Lakers do. While the Lakers are led by a gene-pool-lottery-winning prima dona, a soft power forward who gave up on his previous team so he could be traded to a contender and a coach who inherited two different conference finals caliber teams each featuring the best player in the NBA, the Nuggets and their coach are a rag tag, tattooed (well, not the coach) band of former misfits and NBA castoffs who have more to prove but less to lose than their opponent. That's a very dangerous combination.

So if you'll kindly grant me a mulligan on my misguided prediction from earlier, I'm going with the Nuggets in six. I'm not as convinced as many Nuggets fans that the Nuggets will steal Game 1 in Los Angeles (I hope they do because I'll be there and am yet to witness a Nuggets victory at Staples Center), but I believe they'll steal one of the first two. The Nuggets will then win both Pepsi Center games in front of the most fired up crowd Denver basketball has ever seen. They'll lose Game 5 back in Los Angeles and then take Game 6 in Denver to advance to their first NBA Finals in franchise history, where they'll go on to beat the Cleveland Cavaliers in six games.