As I'm writing this I'm watching Nuggets head coach George Karl's postgame press conference and he's whining profusely about the officiating. Karl has every right to be upset about the lack of calls or bad calls the Nuggets received while trying to be aggressive offensively (Pau Gasol finishes the game with one foul? What a joke).

But a) Karl should have stood up for his players and worked the refs during the game (more on that below) and b) ultimately, the refs weren't the reason the Nuggets lost the most important game in their franchise history. Their own poor decision making - from the coach down through the players - cost them this golden opportunity to closeout the Lakers at Denver on Friday night.

So many things went wrong in Game 5, notably the Nuggets ice cold stretch from the 5:12 mark in the third quarter through the 8:11 mark in the fourth during which the Nuggets committed five turnovers, shot a ghastly 1-12 from the field and 1-6 from the three-point line. That was some of the worst basketball we've seen all season.

To best capture the Nuggets deficiencies in Game 5, I've decided to dust off my post from April 16th titled "What needs to change in the playoffs..." in which I listed all the areas the Nuggets needed to improve in to be successful in the postseason. I'm going to re-list each item in bold, and relate them to what happened at Staples Center on Wednesday night.

...Carmelo Anthony's first shot and every third shot must be a drive.

Melo shot 9-23 to go along with zero offensive rebounds because half of his shots were jumpers outside the lane (including three missed three-pointers) rather than purpose-driven takes inside. To be fair to Melo, he shot a very respectable 13 free throws and the refs swallowed their whistles on a lot of his attempted takes inside in which the Lakers hounded and in some cases hammered him. But he played like he was expecting the whistle rather than focusing on making the shot. Melo was visibly more aggressive and successful driving inside in the latter moments of the fourth quarter, but we needed that Melo throughout quarters one through three.

...J.R. Smith's first shot and every third shot must be a drive.

J.R. kept his streak alive of playing awful on the road in the Western Conference Finals. Maybe the basketball gods were punishing him for showboating in front of the Lakers bench in Game 4 by sticking him with an awful 1-10 night from the three-point line, but in reality the question asked should be: what was J.R. doing taking 10 three's and only three non-three's? J.R. was 2-3 on non-three-pointers and yet never bothered taking the ball aggressively inside beyond those three attempts. The Nuggets have 20 assistant coaches. Doesn't one of these guys keep track of these things during the game? Inexcusable.

...No more finger rolls and flip shots around the basket from Nene.

At the 5:18 mark in the fourth quarter with the opportunity to cut the game to six after a string of good defensive stops by the Nuggets, Nene received a great pass while storming right down the lane. But rather than dunk the ball emphatically and alter the momentum in the Nuggets favor, Nene turned his body away from the basket and while under the basket flipped the ball backwards for a missed field goal attempt. And even though Lakers center Andrew Bynum had to sit a lot due to foul trouble, Nene never made his presence known offensively, finishing with a paltry three field goal attempts. Three!!

This one's on Chauncey. With the Lakers tired, down by five and ready to pack it up late in the third quarter, the normally sure-handed Chauncey threw the ball away to the Lakers Pau Gasol on two consecutive possessions (both plays made no sense as there was plenty of time on the shot clock). And then, two possessions and a Melo traveling violation later, Chauncey invoked Allen Iverson by over dribbling until there was no time left on the shot clock, leading to a 24-second violation. So instead of the Nuggets being up by a minimum of three points entering the fourth, they found themselves tied with the Lakers at 76 apiece. Frankly, since being a Nugget again I've never seen Chauncey play worse.

...George Karl must stand up. 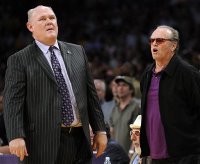 As noted above, Karl had no problem complaining about the refs after the game and yet during the game (based on what we could see on TV) it appeared as though he did nothing to support his players whom he apparently felt were getting no calls when driving to the basket. For several years now, Nuggets fans have been begging and pleading that Karl work the referees, get himself teed up if need be to stop runs by opposing teams and call timeouts to bring his team into line when they lose sight of what they're supposed to do offensively (read: take the ball to the @#$%& basket instead of chucking long jump shots!!).

In his franchise's most important game to date, Karl again did his Phil Jackson impersonation again (or maybe we should call it his "anti-Doc Rivers" impersonation) by sitting quietly still throughout much of the contest and letting the players "figure it out." If ever we needed "Fiery George" from his Seattle days it was on Wednesday night, and he was nowhere to be found.

Doesn't Karl know that by drawing a technical you get three benefits?!! Not only do you show your players that you have their back against bad calls, but you put yourself in position to get a big/favorable call later on (such as that awful foul on Nene when Gasol elbowed and rolled over him in the fourth, fouling Nene out) and you stop play to collect your team if they're playing out of hand. This is Basketball 101. My friend Justin whom I watched the game with had a classic line during that awful third-to-fourth quarter stretch: "How much do you think Karl could have sold his seat on EBay for? Because anyone could just sit there like he is."

And don't get me started on Karl's inability to draw up a decent inbounds play at the end of the first half and then not calling a timeout soon thereafter to set up a possible last-second play. In the Western Conference Finals, every possession counts...at least that's what I've understood to be the case for all 33 years of my life.

But whether you want to assign blame to Karl, Melo, Chauncey, J.R., Nene, the referees or even Kenyon Martin for jacking up awful, rushed shots, the bottom line is that the Nuggets collectively didn't play smart in Game 5. They didn't attack the rim consistently, committed as many fouls as free throws attempted (you know that's Denver Stiffs key ratio), committed weak fouls that enabled the Lakers to get countless three-point plays and tied their series high with 15 turnovers, including four straight at the end of the third period which I believe cost them the game.

I know he's been a legitimate target for criticism throughout this series, but ESPN's Jeff Van Gundy had a great point early in the Game 5 broadcast when he pointed out that as a player, a coach and an organization, you don't know if you'll ever be back in the conference finals again. Everything had to come together for the Nuggets to get this far: all their players playing with something to prove, no major injuries, their coach coaching with something to prove, their organization putting the right team together, a favorable first and second round matchup, and a conference finals matchup against a tired, exhausted Lakers team that might have peaked three months ago. But rather than seize this potentially once-in-a-lifetime opportunity - the Lakers have been to 30 conference finals, the Nuggets three - the Nuggets are letting the Lakers steal their NBA Finals hopes away.

All the negatives aside, I still believe in this Nuggets teams and there's no doubt in my mind that the Nuggets will win Game 6 on Friday night and bring this series back to Los Angeles for a Game 7 on Sunday.

But in Game 5, Karl and the Nuggets were Denver Stiffs indeed.