"We don't plan on going back to Dallas" (Nuggets/Mavericks Game 5 Preview 7pm MST)...,

Share All sharing options for: "We don't plan on going back to Dallas" (Nuggets/Mavericks Game 5 Preview 7pm MST)...,

Chauncey Billups had two great quotes yesterday. In response to Mark Cuban's late (and lame) apology to Kenyon Martin and his mother in which he suggested that K-Mart's mom could sit in Cuban's suite "when the series comes back to Dallas", Billups retorted: "We don't plan on going back to Dallas."

And when the Mavericks Jason (the poor man's Fat Lever) Kidd suggested that all the pressure is on the Nuggets, Billups apparently chuckled and astutely countered with: "We can still afford to lose. They can't."

They can't and won't win tonight.

I also want to see no more scuffles with the Mavericks players and no more jawing at the refs that could lead to unnecessary technicals, ejections or future suspensions. (Ok, who am I kidding? The Nuggets always jaw at the refs.)

Bad calls and neanderthal-behaving fans aside, the Mavericks players put up an admirable fight in both Games 3 and 4. But these Mavericks are clearly gassed and they won't have their home court zoo of a crowd to rally them back to life in Game 5.

In these past two games, we haven't seen the Nuggets team that was beating its playoff opponents by over 21 points per game leading up to Game 3. I look forward to welcoming those Nuggets back tonight and having them reward us fans with a well earned victory.

And taking the lead from some of this blog's readers who were proposing signs we'd like to see at Pepsi Center tonight, here's my entry... 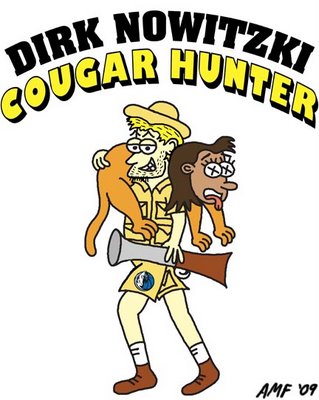