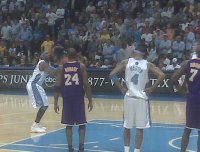 A WWE worthy beat down took place at Pepsi Center on Monday night after all. But instead of it featuring Vince McMahon and his 'roided up side show, it featured the most complete Nuggets performance we've seen thus far in this Western Conference Finals. Remember that "statement game" stuff I wrote about earlier? Consider it done!

With the Nuggets posting 120 points on the board and beating the Lakers soundly by 19 in spite of an off night from Carmelo Anthony, it's becoming objectively clear that the Nuggets are the better team in this series. Now if they could just stay out of their own way and avoid unnecessary technical fouls, silly regular fouls, a few curious rotation decisions from the coach and rushed three-point shots, their franchise's first appearance in the NBA Finals can be theirs by Saturday morning.

They can do this.

This game was won handily for a lot of reasons, but the primary reason was what I call "tip rebounds." I don't how this translated on TV, but from my seat where I get to watch the Nuggets play defense closely in the first half and offense closely in the second half, all I saw were countless tipped balls to close by teammates on the Nuggets way to an outstanding 58-40 rebound average. Whether head coach George Karl made this a point of emphasis leading up to the game or the Nuggets players instinctively figured it out, by tipping the ball rather than trying to corral a rebound against a significantly taller player completely altered the course of the game. The Lakers frontline should be embarrassed.

The second biggest factor, of course, was the "One Man Comeback" (as Chris Marlowe astutely calls him) J.R. Smith. Nothing gives me as a fan more confidence than knowing that the Nuggets can win with either Melo or J.R. having a big night offensively - i.e. we don't need them both firing on all cylinders at the same time to secure a win. But what happens when, for the first time, both Melo and J.R. put together a big offensive night? If this happens Wednesday, look for the Nuggets to come back to Pepsi Center on Friday night up 3-2.

What made J.R.'s night special weren't the four three-pointers, although those certainly helped seal the Nuggets victory, but rather his willingness to finally drive to the hole. And as evident with the Nuggets huge offensive rebounding advantage, good things happen when you're aggressive around the rim, as J.R. was tonight. J.R.'s inside-outside mix is exactly what the Nuggets need moving forward.

And the final big plus in the Nuggets favor - something I've harped on for two years now - was that the Nuggets free throw attempts (49) obliterated their personal fouls committed (24), a key ratio in all Nuggets victories. While the calls seemed to favor Denver in the first half, I thought the game was called evenly poorly in the second half with a barrage of ticky-tack fouls and a ridiculous technical foul on Kenyon Martin (more on that below). But the Nuggets were ultimately rewarded by being the more aggressive team from tipoff to conclusion.

Now back to that whole "getting in their own way" thing. First off, Karl (who coached a good game otherwise) clearly hasn't gotten the memo that Anthony Carter has no business being on the court beside Chauncey Billups when Kobe Bryant is out there. I'll concede that the Nuggets need A.C. to spare Chauncey for about eight minutes a night, but that's all. IF Kobe and Chauncey are on the floor at the same time and Karl wants Melo to avoid foul trouble, he must re-insert Dahntay Jones to guard Kobe. Period. I'll repeat what I said in an earlier post: Dahntay Jones is not a pitcher. Once he's yanked he's allowed to go back in!! Moreover, Dahntay is playing great on both ends whereas A.C. is either a turnover or an easy Kobe make waiting to happen. This is indisputable and I wish I could have been in the postgame press conference to ask Karl about the misuse of Dantay myself, because no one in the press was smart/bold enough to do so.

Secondly, the Nuggets succumbed to what Nuggets beat writer Chris Tomasson refers to as their "knuckle-itis" when J.R., Melo and K-Mart all drew technical fouls in the fourth quarter. K-Mart's in particular (even though I thought it was a horrendous decision by the refs) will come back to haunt the Nuggets, as it was his sixth in the postseason. A seventh K-Mart technical and he's automatically suspended for a playoff game. Given that it's guaranteed that K-Mart will draw a seventh at some point, perhaps he should just get it out of the way at Staples Center on Wednesday night. I believe the Nuggets could win a Game 6 at Pepsi Center with Chris Andersen filling in for K-Mart, but don't foresee them winning a Game 7 at Staples (if we end up needing one) sans K-Mart. I know the Nuggets won't do this and have to hope K-Mart maintains his cool, but given K-Mart's reputation with the refs, it's worth considering.

But let's refocus on the positives. The Nuggets are now closer to the NBA Finals than they've ever been in their franchise history. They are clearly a deeper, tougher and better team right now than the Lakers, even when Kobe delivers a stellar performance as he has all series long. If the Nuggets can just stay out of their own way and maintain their focus and poise, that first ever NBA Finals is theirs.

It's never felt better to be a Nuggets fan. 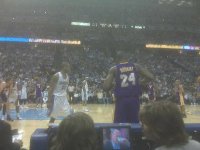 We all know that the Nuggets have to win Game 4 or this series is over. Anyone covering or following this series will tell you that. What they won't tell you is that merely winning this game isn't going to cut it. In fact - assuming the Nuggets can actually pull off the victory - how and by how much the Nuggets win the game matters greatly. Because three games into the Western Conference Finals, we've seen mostly blown opportunities by our Nuggets rather than great play for four quarters. The Nuggets were so shaky on Saturday night in particular that Karl had an A-Rod type five minute pause when asked if he was still confident his team during the postgame press conference. Chauncey Billups captured the game best: "We played hard, but we didn't play smart."

After reading J.A. Adande's article over at ESPN.com detailing just how banged up and exhausted the Lakers were on Saturday night, I found myself much more disappointed than I already was when the game concluded and the crowd fell deathly silent. My Benedict Arnold Lakers fan of a brother tried convincing me that the Lakers were the ones who almost blew Game 3, citing their 14 missed free throws. I couldn't disagree more. Those 14 missed freebies simply showcased just how tired the Lakers must have been, infuriating Nuggets fans like me who watched a second golden opportunity in three games slip away.

If it's any consolation, Karl, Chauncey and even Kenyon Martin admitted to the press on Sunday that the Nuggets were too trigger happy with the three-pointers in Game 3, were pressing too hard for "dagger" shots rather than taking it to the rack for an easy two or free throws, and vowed that Game 4 will be played differently.

If the Nuggets are to win this series, they must deliver a statement game on Monday night. That means a lot more free throw attempts than fouls committed. Staying out of foul trouble by playing smart defense rather than baiting the refs into silly foul calls. No momentum-killing technical fouls. Capitalizing on their "hump hand" opportunities. Holding Kobe Bryant to 32 or less. Holding the Lakers to under 100 points. Getting Melo field goals attempts in the fourth quarter and especially with less than two minutes remaining (inexcusably, Melo hasn't taken a shot in the final two minutes in all three games). And winning in a commanding way - i.e. not letting another asinine George Karl inbounds play even have the potential of ruining the outcome (I encourage you to read more on Karl's history of inbounds play incompetence).

The Lakers may be tired and banged up, but they're confident knowing they can beat the Nuggets without playing their best. It's time for the Nuggets to make them feel even more tired, more banged up and less confident.

Game 4 is a statement game or bust.