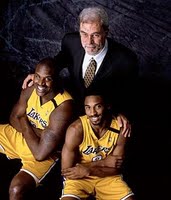 "Oh, I thought the Generals were due!"

So said The Simpsons' Krusty the Clown after betting - and losing - against the Globetrotters back in 1995.

The Generals may never beat the Globetrotters*, but some day, some team will be the first to defeat a Phil Jackson coached team who's ahead 1-0 in a playoff series. Why not the Nuggets?

As of today, every member of Nuggets Nation is familiar with Jackson's gaudy record for playoff series victories after being up 1-0. Just in case you've been hiding under a rock, it's 42-0. (It must be nice when you inherit Michael Jordan and Scottie Pippen on one team and Kobe Bryant and Shaquille O'Neal on another. But I digress...)

Before we get into how the Nuggets could be the first to break Phil's remarkable streak, I must confess that Wednesday was a dark one for me. Not only couldn't I sleep on Tuesday night, but I had a 7:15am flight back to Denver from Los Angeles the following morning and couldn't sleep on the flight either. When I landed in time for a lunch meeting, I barely had an appetite and just felt rotten all day. That's what an emotionally exhausting night will do to you, I suppose.

After a day of ducking and dodging calls, texts and emails from my Lakers "fan" friends (the majority of whom either guaranteed a Lakers sweep or, at worse, a five-game Lakers series victory), I ended up at the event I flew in for with a lot of fellow Nuggets fans. But rather than enjoy the event and seeing friends that I grew up with, the only thing being discussed among the attendees was the Game 1 heartbreaker...

"What was Karl thinking by having A.C. inbound that pass?!"

"How does Melo not take a shot in the final three minutes?!"

"Phil Jackson is 42-0 if he wins Game 1. We had to steal that game last night. The Nuggets are finished."

I still believe the Nuggets can break the Phil curse but if it's going to happen, George Karl and his players must deliver a knockout punch. If Game 2 is at all close down the stretch, the Nuggets will be at the mercy of the refs, one stupid play, Kobe Bryant's killer instinct or (most likely) all of the above. And in that scenario, I don't like our odds.

We can squabble over Karl's disastrous decision to have Anthony Carter throw the crucial inbounds pass and his failure to get the ball into his hottest player's hand for the final three minutes of Game 1 until we're blue in the face. But both incidents point to a larger issue: Karl and the Nuggets got timid in the closing minutes. Merely inserting A.C. into the game for J.R. Smith at the 00:35 mark and then bringing A.C. back in five seconds later for Chris "Birdman" Andersen (even though having Birdman under the boards could have put the Nuggets in position for a put back) wreaked of tentativeness.

If you watch what the Magic did against the Cavaliers tonight, they stole that victory by being aggressive with their best players leading the way. The Magic could very well have lost tonight, but at least they would have done so with Rashard Lewis taking their last shot. Thanks to Karl's insistence on A.C. "protecting" the game, the Nuggets never really got that last good shot they desperately needed in Game 1 (Chauncey's outstanding three-pointer in the corner notwithstanding as it was a desperate heave that fortunately went in).

The bottom line is that the Nuggets did a lot of things very well on Tuesday night. But in order to be the first team ever to win a playoff series against a Phil Jackson coached team that's up 1-0, they'll need to repeat their Game 1 performance while playing much more aggressively down the stretch. This could be an even greater challenge with J.R. Smith and Kenyon Martin ailing a bit, but unless Kareem Abdul-Jabbar breaks your hand, there are no excuses in the Western Conference Finals. Just ask Alex English.

Phil Jackson is due to lose a series that he's ahead in. If the Nuggets want to be the first team to pull that off, they need to take it, not wait for it.

*Playing as the New Jersey Reds, the Washington Generals defeated the Globetrotters in 1971. But they've never won as the Generals.