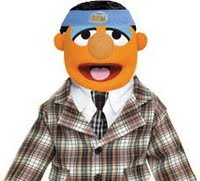 Pardon my lame attempt to create a Carmelo Anthony puppet (pictured to the left) to rival the Kobe Bryant and LeBron James versions being shown endlessly these days, but the F.A.O. Schwartz custom Muppet maker has very limited options and this was the best I could do.

At least the suit is a dead ringer for an item in Melo's wardrobe.

In addition to the ongoing LeBron/Kobe puppet show (and I must confess that I like the ads) and the Vitamin Water LeBron vs. Kobe ads, before the Game 2 pre-game show ESPN aired a Nike-sponsored special titled "Dream Season: 23 & 24", inferring that this will be a "Dream Season" when LeBron and Kobe meet in the NBA Finals. And during the first quarter when the refs did everything possible to keep the Nuggets from playing aggressively, one of my friends watching the game with me sarcastically noted: "Was that foul sponsored by Nike, too?" 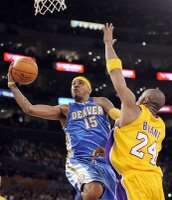 But the foul calls eventually evened out and the Nuggets eventually remembered that they're better than these Lakers. So while the LeBron vs. Kobe 2009 NBA Finals might be preordained in the NBA's offices in New York, I'm thrilled that neither the Nuggets nor the Magic have gotten the memo. I can't really speak for the Magic, but I can assure you that the Nuggets have every intention of ruining the NBA's June ratings party.

This Game 2 comeback victory was special for so many reasons...

...Carmelo Anthony channeling his childhood hero Bernard King to break a Nuggets record with his fifth straight 30+ point game, which included attempting 14 free throws (now you know why Denver Stiffs has been harping on Melo's FT attempts all season long!).

...Chauncey Billups outsmarting Kobe Bryant with the off-the-back pass to himself to close the second quarter and complete a stunning 14-2 Nuggets run.

...The rebirth of Linas Kleiza. Welcome back, LK!

...Kenyon Martin's hard but fair/necessary foul on Trevor Ariza that sent the red hot Ariza slamming into the floor.

...For the first time ever, George Karl (almost) worked the sidelines as much as Jack Nicholson did.

...The Nuggets missing only eight free throws to keep their playoff streak alive of consecutive victories when they miss less than 10 free throws.

...Chauncey's lucky pass to Nene who found the open Kenyon Martin for the go-ahead layup with 29 seconds left.

And yet Chauncey uncharacteristically missed three free throws. And J.R. Smith remains ice cold. And Nene was impotent offensively. And Karl continues to pull Melo from the game at inopportune times (note to Karl: let Melo tell you when he's ready to come out, not the other way around). And Chris "Birdman" Andersen gave us next to nothing tonight. And Anthony Carter (thankfully) barely touched the floor.

What's going to happen when all the Nuggets contribute for 48 minutes? That's what we're going to need on Saturday night at Pepsi Center, because the Lakers will be seeking revenge for what could easily be a 2-0 Nuggets series lead right now.

Even though this was the biggest Nuggets playoff victory since perhaps Game 5 against the Supersonics in 1994 or possibly Game 2 against a different Lakers team in 1985, it's just one game. If the Nuggets are to indeed get to their first ever NBA Finals and get Nike to create a Melo puppet to supplant that Kobe model, they have to win three more very tough games ahead. But for now, at least I can get a good night's sleep.

Congratulations to the Nuggets for gutting out their biggest victory yet and making Nuggets Nation proud.