Revisiting the trade that set this in motion...

Share All sharing options for: Revisiting the trade that set this in motion... 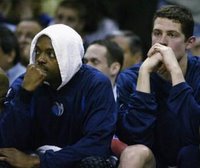 While watching the Nuggets and Mavericks duke it out in the second round of the playoffs, fans of both teams should make it a point to remember February 21, 2002. It was on that day seven years ago that then Nuggets GM Kiki Vandeweghe pulled the trigger on one of the biggest trades in Nuggets franchise history and set the Nuggets and the Mavericks on a collision course to meet in the playoffs today.

Faced with a going nowhere roster loaded with onerous salaries due to the "efforts" of the Dan Issel Administration, Vandeweghe unloaded Nick Van Exel, Raef LaFrentz, Avery Johnson and Tariq Abdul-Wahad to Dallas (the team Vandeweghe had previously worked for) for Juwan Howard, Tim "I hate gay people" Hardaway, Donnell Harvey, a first round pick and cash.

It was a ballsy move by Vandeweghe, who essentially ceded Western Conference prominence to Dallas for the next decade while gambling that the Nuggets would rebuild successfully through the draft and free agency to become contenders themselves down the road. Vandeweghe's plan would work eventually, but he wouldn't be around to see it.

After one-and-a-half grueling seasons that saw Hardaway throw a TV monitor on the court, the mockery known as open tryouts, a 17-win season, a starting backcourt that couldn't crack a 15-man NBA roster the following season, an all-time lottery bust nicknamed Skita and plummeting attendance that incited Vandeweghe to turn the Pepsi Center atmosphere into a hybrid of a Planetarium laser show and Barnum & Bailey's Circus, Vandeweghe and the Nuggets lucked out. 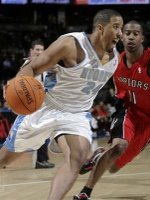 After astutely trading the oft-injured Antonio McDyess plus that acquired Mavericks pick to New York for Nene and Marcus Camby in 2002, good fortune smiled upon the Nuggets again in 2003. In that year's draft, Detroit foolishly drafted Darko Milicic with the second overall pick and Carmelo Anthony landed in the Nuggets lap at three (it should be noted that Vandeweghe was allegedly going to draft Milicic at three had he been available). With Melo, Camby and Nene on board to go along with plenty of cap space - thanks in large part to the departure of Howard and Hardaway's contracts - Vandeweghe was able to sign free agents Andre Miller, Jon Barry (Denver Stiffs all-time favorite one season Nugget) and Voshon Lenard. In 2004, the Nuggets would make the playoffs for the first time in nine long, torturous seasons and haven't missed a postseason since.

Two seasons and a Vandeweghe firing...errrr, non-contract renewal...later, Miller would be traded for Allen Iverson (by Vandeweghe's successors Bret Bearup, Rex Chapman and Mark Warkentien) who was then traded - a season-and-a-half later - for Chauncey Billups and, in a twist of irony, McDyess.

Meanwhile, with LaFrentz and Van Exel added to a roster already featuring Dirk Nowitzki, Steve Nash and Michael Finley coming into their respective primes, the Mavericks were the instant winners of that 2002 mega deal. They won 57 games and a playoff series to wrap that 2001-02 season, followed by 60 wins and a Western Conference Finals appearance the next. Beyond the wins and losses, the Mavericks were young, deep and flexible and suddenly became the NBA's hot destination when players like Raja Bell, Eduardo Najera and Walt Williams joined the core of Nowitzki, Nash, Finley, Van Exel and LaFrentz (hence the 60 wins). In fact, since that trade the Mavericks have made a postseason appearance eight consecutive times, have won at least 50 games in each of those eight seasons and have won nine playoff series, including the Western Conference Championship in 2006. (Technically, the 50 wins streak goes back nine seasons, as the Mavericks had won 53 games in 2000-01. Nine straight 50-win seasons is a credit to Mavericks owner Mark Cuban and has to be one of the longest streaks of sustained success in NBA history.) 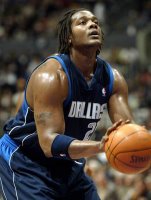 Entering the 2003-04 campaign, the Mavericks packaged Van Exel, Johnson and three scrubs to Golden State in exchange for Antawn Jamison, (former Nugget) Danny Fortson and two scrubs and traded LaFrentz, a pair of scrubs and a pick to Boston for Antoine Walker and Tony Delk. The rich kept getting richer. But even with two Antoines (or should I say Antawns), Nowitzki, Nash, Finley and a rookie named Josh Howard, the 52-win Mavericks floundered and were bounced in the first round. With a plethora of talent and a rich owner willing to make deals, in the 2004 offseason the Mavericks jettisoned Jamison to Washington and took back Jerry Stackhouse, Christian Laettner and Devin Harris. And later sent Walker and Delk to Atlanta for Jason Terry, Alan Henderson and a first round pick. Not too shabby.

So how exactly did this trade bring these two teams together today? In some cases, it's pretty obvious and in others, the route was more circuitous.

On the obvious front, the Nuggets don't get to acquire Nene or draft Melo had Vandeweghe not firebombed the roster through the Dallas trade and thrown in the towel while torturing the fans with bad basketball, bad DJs and bad laser shows for two straight seasons. And the Nuggets don't sign Miller without Howard and Hardaway's expiring contracts coming off the books. And without Miller, there's no Iverson, and without parting with Camby's contract and Iverson this past summer, there's no Billups. And with no Billups, there's no playoff series victory for the first time in 15 Nuggets seasons.

So while a Stackhouse-Terry-Kidd trio (sans the injured Stackhouse) plus Dirk Nowitzki and Josh Howard is good enough to get you into the second round of the playoffs, a Nene-Melo-Billups trio plus Kenyon Martin, J.R. Smith and Chris Andersen might just be a tad better (to be determined in Dallas this weekend, of course...let's not get cocky). 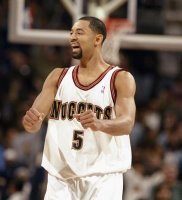