Karl reveals that J.R. is likely to start "in time"...

Share All sharing options for: Karl reveals that J.R. is likely to start "in time"... 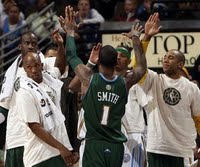 Friend of Denver Stiffs (and former Nuggets reporter for The Rocky Mountain News) Chris Tomasson just passed on some interesting information regarding the Nuggets starting back court situation for the 2009-10 season.

But he might not get any votes next season.

That's because Nuggets coach George Karl revealed Monday that Smith is likely to be the team’s starting shooting guard next season. Karl this season started Dahntay Jones, but he usually only plays about the first nine minutes of each half.

"I think that’s where we’re all heading in time,’’ Karl said Tuesday about inserting Smith, a rising talent, into the starting lineup.

"It’s cool with me,’’ Smith said. "Whatever he wants me to play, that’s what I’ll play… I’ve started all my life… I love the minutes. I’ll take that regardless.’’

Due to his likely starting role, Karl said next season he wants to reel Smith in a bit, although Karl said it will take some time. Smith is known for regularly hoisting 25-foot jumpers, although he does make a good number.

"Definitely,’’ Smith said about what Karl wants to do. "I got to take better shots. I got to take more consistent shots… I can’t shoot (as many) 25-footers.’’

Jones, an unrestricted free agent after playing this season for the minimum of $926,678, wants to return. But the Nuggets might not offer him any more than next season’s minimum of $1.03 million.

Denver Stiffs take? First off, Karl doesn't guarantee J.R. the starting job in his quote and he tends to speak his mind before thinking it through (hence why the media loves him). But I'm not sure why Karl would even address this now. This could either motivate Dahntay to play even harder or upset him knowing that he's potentially out of a starting job in Denver already. Regarding J.R., using the starting carrot has really motivated him thus far, and I just hope he doesn't lose his edge if he feels he's the presumed starter. I'm all for J.R. starting next season, but not at the expense of the great momentum the Nuggets have now.

And if you're interested, you can catch Tomasson's latest reporting over at FoxSports.com. Check out his article on Phil Jackson starting "psychological warfare."