Share All sharing options for: I hate the @#$%& Lakers (Nuggets/Lakers Conference Finals Preview)... 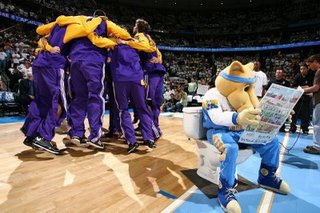 I've hated the Lakers for as long as I can remember.

I hate that every stadium they play in (sans Boston) about 25% of the crowd is on their side.

I hate that they've been the beneficiary of controversial calls for as long as I can remember.

I hate that their fans are in complete denial of the NBA's favoritism towards them. (For more on my hatred of bandwagon Lakers fans, I encourage you to read last year's article "10 Reasons Why I Hate Lakers Fans".)

But most of all, I hate that they've always stood in the Nuggets way. 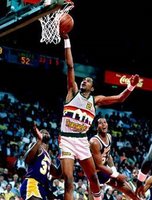 I hated them when they crushed the Nuggets 153-109 in Game 5 of the Western Conference Finals in 1985 (after the Nuggets showed promise by winning Game 2 136-114 at the Forum). The Nuggets were an Alex English broken thumb and a phantom call on Danny Schayes in Game 4 away from making that a seven-game series.

I hated them when they swept us in 1987 (before that series Nuggets head coach Doug Moe famously said "We got no shot to beat the Lakers").

And I hated them when Magic Johnson hit perhaps his greatest all-time regular season shot when his 30-foot three-pointer sunk the Nuggets in double overtime at McNichols Arena on November 15th, 1988. 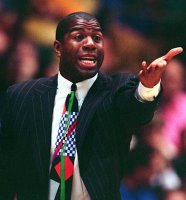 My hatred of the Lakers subsided a bit throughout the 1990s as both franchises struggled. My favorite 1990s Lakers/Nuggets moment was when Magic Johnson took the Lakers' coaching reigns in 1994, won five of his first six games and was threatening to overtake the Nuggets for the 8th and final playoff seed. The two teams met in Denver on April 8th of that year - a game that would decide the playoff fate of either team - and the Nuggets beat them soundly 112-99. The Lakers wouldn't win again under "coach" Magic, finishing their season with 10 consecutive losses.

It's been fashionable for many in the national media to pick the Nuggets to defeat the Lakers in the upcoming Western Conference Finals. Most point out that this Nuggets team isn't the same team that lost three out of four to the Lakers during the regular season. That's mostly true, except that April 9th matchup discussed above took place in the third-to-last-game of the regular season on the heels of the Nuggets winning eight straight and 13 of 14. Are the May 19th Nuggets that different from the April 9th Nuggets? For our sake, I sure hope so.

I 100% believe that the Nuggets can beat the Lakers, but that doesn't mean I believe they will. But before we get to my prediction, let's break down the series...

We've had one intangible category in all our series previews this year. Against the Hornets it was health (advantage: Nuggets) and against the Mavericks it was momentum (also advantage: Nuggets). But against the Lakers, the intangible category has to be the referees. Simply put, you can't break down a series against the Lakers without acknowledging that the Lakers have a substantial advantage with the whistle. Throw in that we're in the midst of the worst economic crisis since the Great Depression - meaning NBA gate and sponsorship revenue will continue to plummet into next season - and you have to believe that the NBA will do whatever it can within reason to get their coveted Kobe Bryant vs. LeBron James NBA Finals. For all the talk of LeBron's popularity, remember that the 2007 NBA Finals, featuring the LeBrons vs. the San Antonio Spurs, had the lowest rating ever. Comparatively, the 2008 Lakers vs. Celtics NBA Finals were up 50% over the previous year. The Nuggets won't get any calls in this series. 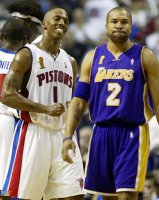 Chauncey's counterpart in purple and gold is another longtime, gutty winner in Derek Fisher. But while Chauncey is the catalyst for all of his teams successes, Fisher has just been a piece of the puzzle. 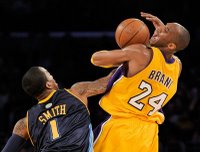 When one team's starting shooting guard is one of the best two players in the NBA while the other has had to make the roster by taking a one-year, minimum deal after fighting his way back into the NBA, you could consider this category a double advantage for the Lakers. I thought some of the criticism thrown Kobe Bryant's way regarding how the Lakers played against the Rockets was justified, but he remains - in my opinion - the most focused, best conditioned and most lethal player in the NBA. And while everyone in Nuggets Nation is enamored with what we've gotten out of Dahntay Jones defensively this season, he doesn't even use his six fouls well against Kobe.

Just as no one on the Nuggets can guard Kobe with any sort of competency, no one on the Lakers can guard the Nuggets Carmelo Anthony. The big difference is: Kobe knows/believes this and Melo doesn't. At least not yet. Let's face it: Melo has sucked against the Lakers recently. Rather than take the ball to the rack to punish the Lakers soft interior defense (including when Andrew Bynum is on the floor, by the way), Melo often settles for ill-timed jump shots and fade aways with a defender in his face. During the 2008-09 season against the Lakers, Melo has had a 5-15 shooting game (including going 0-4 from the free throw line), a 5-19 (that's not a typo) night (including an inexcusable zero FT attempts) and a 4-17 affair (also with just four FT attempts). And of course we painfully remember his "We Quit" 36.4% shooting performance during last year's Lakers sweep.

As detailed here and elsewhere, in the 2009 playoffs Melo has grown into the cold-blooded killer/winner we always knew he could be. And with Trevor Ariza guarding him for much of the series against the Lakers, there's no excuse for Melo not to break out of his slump against this team.

Pau Gasol has played well against the Nuggets since joining the Lakers in one of the most one-sided trades in NBA history (I'm still convinced that the Lakers/the NBA paid Grizzlies' "GM" Chris Wallace a million dollars under the table after consummating that deal). In his last two games against Denver, Gasol had 27 points/19 rebounds and 18 points/10 rebounds. Interestingly, either Nene and Kenyon Martin each missed one of those games. In the two regular games featuring Nene and K-Mart, Gasol put up much more pedestrian efforts, but the Lakers won each game.

It's been said a lot on this blog but it bears repeating: I've never seen a Nugget play with the defensive intensity of Kenyon Martin during the playoffs this year. And K-Mart's defensive effort against Gasol should be no different. But no matter how hard/tough K-Mart plays against Gasol, he can't change the fact that Gasol has about four inches on him. 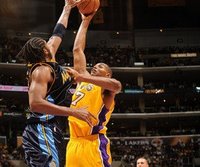 Like the K-Mart vs. Gasol matchup, the Nene vs. Andrew Bynum matchup presents a big height advantage for the Lakers. Bynum weights a lot more, too. At 275 pounds, Bynum is similar in size to the Mavericks Erick Dampier but infinitely more skilled (that's not saying much). But Bynum is recovering from a torn meniscus and hasn't been the Bynum we saw prior to his January 31st injury. Lakers fans are jumping with joy over Bynum's Game 7 performance against the Rockets. But prior to Game 7, Bynum had a sub-par performance against a team that didn't feature anyone over 6'10" for four of the seven games.

Against a healthy Bynum, Nene played pretty well during the regular season. I suspect a more confident Nene vs. a still struggling Bynum gives the Nuggets a slight advantage here, even through Nene is grossly undersized compared to Bynum. 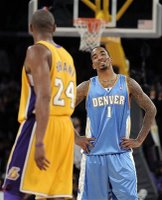 In the Nuggets lone win in their last 11 tries against the Lakers, Birdman owned the energy of the game with a remarkable 11 point, 12 rebound and seven block game. Combined with J.R. and A.C., Birdman gives the Nuggets a boost off the bench unlike any other team left in the playoffs and could be the X-factor that takes the Lakers down.

While George Karl has been doing his best coaching job in the playoffs since taking over the Nuggets, the Lakers Phil Jackson has been doing one of his worst for the Lakers, considering the talent they've assembled. Jackson was thoroughly out-coached by Doc Rivers in the NBA Finals last summer and almost presided over a historic upset had the Lakers lost to the Rockets today. As we derided Karl for all last season and given him credit for this one, it's the coach's job to motivate his players and keep them focused. And you could hardly call the Lakers recent performance against the Rockets focused.

That being said, Jackson has had Karl's number and it's been Karl who's been unable to get the Nuggets motivated against the Lakers for two seasons in a row now. Until that changes, the edge here goes to Jackson.

I'll get right to the point: as much as it kills me to say this, I can't objectively pick the Nuggets to beat the Lakers.

Yes, the Nuggets are playing the best basketball in the Western Conference right now. Yes, the Lakers have stumbled and fumbled their way into the Western Conference Finals. Yes, Carmelo Anthony is playing with a killer instinct/energy level we've never seen in the postseason. Yes, Chauncey Billups has won a championship ring more recently than Kobe Bryant has. And yes, the Nuggets defensively are far superior to the Lakers.

But even though it was a regular season game, I just can't shake that April 9th loss in Los Angeles. Similar to what we're seeing now, the Nuggets were playing their best basketball of the season entering that game and yet that contest might as well have been a repeat of their November 21st meeting, when the Lakers also won by 14 points (notably featuring Chauncey for the first time).

With the exception of the Nuggets 90-79 victory over the Lakers in late February, the Lakers have owned the energy of the game in all of their matchups for two seasons now. That being said, for the first time since 1985 the Nuggets can actually beat these Lakers. And in the Game 1 Preview post, I'll explain why and how.

But for now, my hatred of the Lakers cannot overtake my attempt at objectivity. And therefore, I'm predicting the Lakers to win in seven games.

More than ever, I hope I'm proven wrong.