Share All sharing options for: Hold off on those "BEAT L.A." chants (for now)... 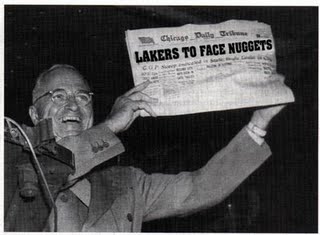 One thing I forgot to mention in yesterday's column commending Nuggets fans for sticking with this organization for so long was how truly classy the fans were at Pepsi Center on Wednesday night.

Not only were there no incidents in the stands (other than the usual drunk idiot escorted out by security, but I didn't see anything), but when Jason Kidd went down hard and then recovered after attempting to foul Kenyon Martin in the fourth quarter, the fans gave him a well deserved standing ovation. And after the game was completely over and the Mavericks exited the Pepsi Center floor for the last time this season, the fans stood and cheered them on. Especially Dirk Nowitzki, who received the biggest ovation of them all as he walked off last and waved to the crowd.

But before that game was over, around the two minutes remaining mark, the Pepsi Center crowd erupted into a deafening "Beat L.A." chant. Thanks to another great home effort by the scrappy, left-for-dead Houston Rockets in Game 6, we'll have to sit on those "Beat L.A." chants for a few more days and may - may - not be able to deploy them at all.

I must confess that I didn't watch tonight's action as I was flying back to LA from Denver, assuming I'd be seeing the Nuggets face off against the Lakers at Staples Center on Sunday. Right before my plane took off, I checked the game score and saw that it was already 21-5 in favor of the Rockets. I did a double take. This had to be a technical glitch and the server was reposting the Game 4 score, I thought. Right before the stewardess asked me to turn off my phone, I refreshed the browser and saw that the score was now 23-9. Wow. It was happening again. Another unnecessary Lakers implosion at the hands of the Rockets.

With a second of allotted cell phone time left before take off, I sent my Benedict Arnold Lakers fan of a brother a text reading: "lakers suck - I expect them to lose and be tired for the nuggs series when i get off this plane".

Like most of you reading this, I still think the Lakers are winning on Sunday. But these Lakers should be ashamed of themselves. In fact, I sent this email to my Lakers fan friends tonight...

...to play a team in the second round of the playoffs missing two of its three best players and starting a "center" who's generously listed at 6'6". I wish my Nuggets could have had such an easy ride to the Western Conference Finals. I guess we're just not that lucky...
-A
(If you're curious as to why I'm already talking trash to Lakers fans, it's because I adhere to the rule that my former boss and good friend Greg taught me long ago: It's better to talk trash and lose than to have never talked trash at all.)

So how do we in Nuggets Nation feel about this? Do we want the undersized, undermanned Rockets and the guarantee of home court advantage that comes with that? Or do we want the Lakers, the franchise that has devoured our and every other small market's playoff hopes so many times before? (I know who the NBA wants to see in that conference finals.)

What I love most about the NBA's seven game playoff format is that the better team always wins. Maybe one team gets really hot for a game or two, but out of seven games the superior squad prevails every time. So if the Rockets somehow beat the Lakers on Sunday, it won't be a fluke in my book.

That being said, I want the Rockets to win on Sunday. As much as I'd love to see a Nuggets/Lakers showdown, I'm a Nuggets fan first and an NBA fan second. I want the Nuggets to get to their first NBA Finals and any objective observer has to know that a matchup against the Rockets gives the Nuggets their best opportunity to do so.

But at the end of the day, the Nuggets might be in a win-win situation here. If the Lakers win Sunday as expected, they'll be exhausted and the Nuggets could steal Game 1 (due to be played Tuesday in LA, I believe), setting them up to take the series in six. And if the Rockets win, start saving your money for NBA Finals tickets, because that's exactly where the Nuggets will be in June.