Share All sharing options for: Have a long memory (Nuggets/Lakers WCF recap)... 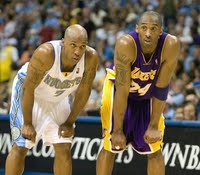 Before getting into a few of the specifics from Friday night's hurtful 119-92 loss to the Los Angeles Lakers and what lies ahead for the Nuggets, I want to share a quick story from the 2007 World Series.

After the top of the 8th inning of Game 4 in which the Rockies found themselves down three games to zero and four runs to one to the Boston Red Sox, I couldn't hold it anymore and had to use the restroom at Coors Field. As I waited in line for an open urinal, I distinctly remember a Rockies fan in front of me saying to his friend: "What's the point of getting to the World Series only to get swept? I wish we hadn't gotten here in the first place."

I thought that was one of the dumbest things I'd ever heard in my life.

So before you rip this team for what it didn't accomplish, a little perspective is in order.

Had you told me in October that behind Door Number One was a Western Conference Finals appearance that included a blowout Game 6 loss at home and behind Door Number Two was an unknown result, I'd have taken Door Number One in a heartbeat. Even as you read the series and Game 6 recap below, keep in mind that this was a magical season and one we should never forget.

Now, about this series, Friday night's loss and a brief commentary on the future...

As stated on this blog many times before, what makes the NBA Playoffs so special is that over the course of a seven-game series - and if both teams are relatively healthy - the better team always wins. And there's no doubt that the Lakers are the better team right now and deserve our congratulations. The Nuggets might be more talented and deeper from the neck down (which is debatable now that we've seen the "real Lakers" play these last two games), but from the neck up the Lakers were clearly the superior team. They simply didn't beat themselves with senseless turnovers, technical fouls, rushed shots and the other maladies that plagued the Nuggets throughout the Western Conference Finals.

Additionally, Friday night's game made it clear to me that the Nuggets and their fans weren't conditioned properly - physically and mentally - to play this deep into May. While the Lakers might have looked lethargic at points in this series, they were simply saving themselves for the knockout punch needed in Games 5 and 6. Kobe Bryant in particular was exceptional in this area. It was as if he had just been on cruise control until the time came to close the series out, which he did with more energy than anyone else on the floor on Friday night.

Moving over to the fans, Pepsi Center had the worst energy of the nine playoff games played there this year. Like the team on the floor on Friday night, the crowd was flat, lethargic and lacked energy. Every time I gazed at the crowd, I saw multiple people yawning. Making matters worse, I was greatly disappointed to see so many fans leave early (it was a Friday night, where did these people possibly have to go?). After everything positive that the Nuggets and their players did for Denver sports this season, they deserved a standing ovation from all the fans at game's end, not just those who remained until the bitter end of Game 6. And as my friend and seat-mate Keith pointed out, even Rocky had an off night. As an example, the Mascot Hall of Famer waited until the game was completely out of reach late in the fourth quarter to launch his "GO NUGGETS!" chant. The crowd needed it about 30 minutes earlier. 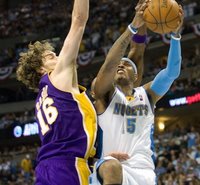 Getting a bit more specific, the Carmelo Anthony coming out party we had hoped for never really materialized. After Games 1 and 2, we were discussing Melo joining the ranks of Kobe, LeBron James and Dwyane Wade in NBA super stardom. Not so fast. Where exactly was Melo in Games 3-6? Defensively, Melo was at his worst in Game 6 (he made Luke Walton look like an All-Star) and in the latter four games of the series, he disappeared for long stretches at a time offensively. I couldn't be more proud of the season Melo had and am convinced that Melo will routinely get the Nuggets deep into the postseason. But I'm not yet convinced that he can deliver Denver's first NBA championship.

As for Melo's teammates, except for J.R. Smith they all looked fatigued on Friday night. Chauncey Billups made an assortment of un-Chauncey-like mistakes with the basketball for the second game in a row. Nene was never able to impose his will on the Lakers big men, also for the second game in a row. Kenyon Martin played with decent energy, but his inexplicable grab of Sasha Vujacic's leg showed me that he let his emotions get the best of him. And Chris "Birdman" Andersen was a step slow defensively, grabbing a paltry two rebounds.

And what about George Karl? From my vantage point at Pepsi Center, Karl looked more exasperated than engaged throughout much of Game 6. He must have known that his team just didn't have it on Friday night. In fact, the Nuggets energy was so bad that I thought Karl should have trotted out a lineup of Smith, Dahntay Jones, Andersen, Linas Kleiza and Renaldo Balkman to start the second half just to give the Nuggets a punchers chance of pulling out a Game 6 victory (I know that no sensible coach would ever do that, but desperate times call for desperate measures).

Overall, the 2009 Western Conference Finals showed us that the Nuggets aren't ready for the NBA Finals stage quite yet, but they're getting damn, damn close. Entering the offseason, the fans and the organization must ask the hard question: can this team as presently constructed ever be an NBA Champion? In the weeks ahead, Denver Stiffs will tackle this question from the coach on down through the 12th man on the team.

But most of all, let's thank them for making it feel good to root for a professional basketball team in Denver again. We haven't been this excited for the Nuggets since 1994 and before that you'd have to go back to the mid-1980's to capture what we experienced in the 2008-09 season.

Remember, I have a long memory.