The best two minutes in sports...

Share All sharing options for: The best two minutes in sports... 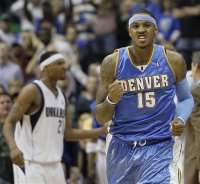 I'm working on a hangover and have to catch a flight, so this will be the briefest game recap in Denver Stiffs history. First, I was able to sneak away from the reception last night to watch the last two minutes of Game 3 from the bar alongside several other Denverites that were here with me. I think the entire wedding reception paused when they heard us screaming from the bar after Carmelo Anthony hit the greatest last second shot in Nuggets history!

Second, the Dallas Mavericks players and their owner are classless, sore losers. For the second straight time in their gym after a loss to our Nuggets, they've blamed the refs for their woes and have refused to walk off the court in a professional, orderly manner. They deserve to be swept. Furthermore, Antoine Wright needs to learn what a foul in the last seconds of a playoff game looks like. You can't bump a guy and put up your hands like you did nothing and then expect the call after your opponent drills a three-pointer to (virtually) end your team's season. Wright is a bona fide loser.

Third, overall the Nuggets didn't seem to play particularly well and yet won anyway (after the reception, I was able to watch most of the first half on the ESPN replay in the middle of the night before totally passing out). When you can have an off night on an opposing team's floor in the playoffs and still win, you're a special team. And this Nuggets team continues to show us why they are indeed a special team.

More to come later. But for now, I'll be passed out on an airplane with a smile from ear to ear thanks to one of the greatest victories in Nuggets franchise history. 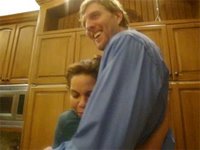 You know things are going well for the Nuggets when the only thing I've been taking heat for leading up to Game 3 was mis-categorizing Dirk Nowitzki's (alleged) fiancee as a "cougar." Those who took issue with my categorization point out that cougars, by definition, are hot. Not so according to the Urban Dictionary, which defines a cougar as...
1.Cougar

As noted by one of this blog's readers, Denver sports teams have been the beneficiaries of "off the court/field distractions" in the past. Most notable was when the Atlanta Falcons' (and the NFL's "Man of the Year") Eugene Robinson got busted for soliciting an undercover police officer for oral sex on the eve of the 1998 Super Bowl against our Denver Broncos. Knowing Robinson had had a long, arduous night, Broncos coach Mike Shanahan called for John Elway to throw right at Rod Smith - the receiver Robinson was assigned to cover. In the second quarter, Elway did just that when he hit Smith for an 80-yard touchdown bomb.

Basketball is quite a bit different from football, and it's doubtful that Nowitzki, having had almost four days off, will be as exhausted and confused against the Nuggets on Saturday afternoon as Robinson was on that Sunday in Miami 11 years ago. In fact, I fear that Nowitzki is going to pull a Kobe Bryant circa 2003-04 and be even more focused than usual on the court while his off-the-court life spirals into distraction. Throw in that when Denver Stiffs predicted a 4-1 Nuggets series victory, it was with the assumption that the Mavericks would pull off this Game 3 thanks to the long rest. And we're all too familiar with the Nuggets penchant for rusty play out of the gate after several days off. Simply put, you have one very nervous Nuggets fan here.

These Mavericks (in theory) are a proud team and aren't (again, in theory) going down without a fight. But just like the Hornets in Round 1, the Mavericks are an inferior team to Denver and would need to play their best basketball of the series combined with Denver's worst to pull off a victory today. But for some odd reason, that's what seems to happen in these Game 3s in the NBA when the team with home court advantage is up 2-0 (unless one team is far and away more dominant than the other, as we just saw in the Cleveland/Detroit series and might be seeing in the Cleveland/Atlanta series next).

Until proven otherwise, I'm sticking with my prediction of a Dallas split, not a sweep. Now if Nowitzki's cougar would walk on the floor and cause a ruckus a la Shooter from "Hoosiers", that might break the Game 3 curse for the favored team. One can hope.

On a side note, the reports of the Lakers demise have been greatly exaggerated. After getting punched in the mouth by the Rockets at Staples Center in Game 1, pundits nationwide (and the TNT guys) were quick to jump on the Rockets bandwagon. Moreover, I received a ton of emails asking me what a Nuggets/Rockets Western Conference Finals would look like. Not only do the Nuggets have a lot of work to do before they/we should even think WCF, but the Rockets were essentially beneficiaries of really off nights by both Kobe Bryant and Pau Gasol in that Game 1, which I don't see happening again.