Looking for the silver lining inside this split...

Share All sharing options for: Looking for the silver lining inside this split... 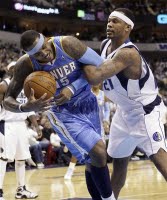 Before this series began, I caught a quote from George Karl on the radio saying something along the lines of if Dirk Nowitzki can be held to 25 points, the Nuggets will win. But if they allow Nowitzki to go for 35 to 40 or more, they're in trouble. And even with Carmelo Anthony delivering his finest playoff performance ever - on both ends of the floor - it wasn't enough to overcome Nowitzki's 44-point outburst, due in part to Nowitzki's incredible effort combined with Kenyon Martin and Nene being in foul trouble, and the devastating absence of Chris "Birdman" Andersen.

(Before I forget, how could TNT not show the replay of Nowitzki's final shot in which K-Mart appeared to not foul him in real time, but a foul was called nonetheless? Was that not the biggest shot of the game?! Am I missing something here? Until I see a slow motion replay from two different angles on that shot, I'll have to believe it wasn't a foul. Welcome to the Stiff List, TNT.)

As noted in the Game 4 preview below, the Mavericks "squeaky wheel" shtick of working the refs all series long finally worked in their favor tonight and the only way for the Nuggets to overcome it would have been a thorough knockout punch. But Denver Stiffs won't blame the refs for this loss. The Nuggets shot 44 free throws (and missed 12 of them) compared to 43 (seven missed) for the Mavericks, and the Mavericks were handed four technical fouls compared to three for our Nuggets. The refs didn't decide the outcome. The bottom line is that whenever you give up 119 points in a playoff game and miss 12 free throws, chances are you'll be on the losing end.

That being said, I see several positives in tonight's loss...

...Melo is evolving into a cold-blooded, clutch shooter and is finally getting respect from the refs (as noted when Antoine Wright tried in vain to win the Academy Award for Worst Supporting Flopper late in the fourth quarter).

...Losses like these will make the Nuggets even better the next time they're faced with a close game.

...The Nuggets effort and energy remains at the same high level nine games into the playoffs. That's pretty impressive.

...Had the Nuggets won tonight, they would have faced a minimum of five and a maximum of seven days layoff depending on what happens with the Rockets/Lakers series. Now they won't be as rusty going into the Western Conference Finals IF they win on Wednesday.

...Shorthanded with Andersen's absence and the foul trouble affecting Nene and K-Mart, the Nuggets still only lost by two points.

...Between the two hard fought games in Dallas, the alleged classlessness by the Dallas fans in the stands (see more on that below) and the whole Mark Cuban vs. K-Mart fiasco, I expect the Nuggets to be even angrier and hungrier to close out this series on Wednesday.

...For once, Denver Stiffs' prediction of a 4-1 Nuggets series victory will be dead on.

As my friend Keith said in a text message to me tonight: "Pretend the Mavs won Game 1 and we just won three."

Will do. See you all on Wednesday night!

On a side note, I was watching the TNT broadcast and they didn't do a good job of articulating what exactly was happening in the stands between Mavericks "fans" and K-Mart's mom, Melo's girlfriend and other members of the Nuggets family and friends. Melo was asked about it repeatedly in his post-game press conference, as was Karl who said he'd use an even uglier word than "hostile" to describe how the Mavericks "fans" treated the members of the Nuggets contingency. If anyone has any insight into what was going on there, please send in your comments.

Interestingly, the two franchises duking it out tonight were involved in two of those 3-3-tie-after-the-3-0 deficit scenarios. Most recently, the 2002-03 Dallas Mavericks were up 3-0 against the Portland Trailblazers in that season's playoffs, were smoked in two of the next three games at Portland and then clobbered the Blazers in Game 7 at Dallas.

More famously, the 1993-94 Denver Nuggets - after pulling off the greatest upset in NBA Playoff history by defeating the 1st-seeded Seattle Supersonics in Round 1 - almost topped themselves by climbing back from the 3-0 abyss to tie the Utah Jazz in Round 2. Those three Denver wins were much closer than the Blazers victories over the Mavericks, however. In that 1994 Round 2, the Nuggets won Game 4 by a point, Game 5 by eight in the second overtime and Game 6 by three. What should have been the greatest Cinderella run in NBA history ended in Game 7 at Utah when the Jazz handily beat the Nuggets by 10.

But these Mavericks aren't Cinderellas nor is anyone outside of Dallas rooting for them. That's what happens when your owner (and yes, I've admitted to being a Mark Cuban fan in the past but he's been way out of line in this series) is totally out of control, your coach blames the refs rather than give credit to his opposition and you give away winnable home games. Cuban and Rick Carlisle can complain all they want, but they did get 49 free throw attempts on Saturday night. And it wasn't referee Mark Wunderlich's fault that Carlisle's defense parted like the Red Sea for Carmelo Anthony's dunk with only 30 seconds remaining.

My concern going into tonight is that Game 3's controversial ending will cast a shadow over Game 4. Meaning, I see the refs being even tougher on the Nuggets than they were in Game 3 and being quite lenient with the Mavericks. When it comes to working the refs (an unfortunate part of basketball), the Mavericks have definitely been the "squeakier wheel" throughout this series.

What that means for George Karl and the Nuggets is that they need to treat playing the Mavericks like playing the Lakers - i.e. the refs will do them no favors, so it's best to accept that fact, not allow it to affect their play and deliver an overwhelming knockout punch. Anything short of a K.O. and I see this series coming back to Denver for a closeout Game 5.