Share All sharing options for: We're not THIS good... 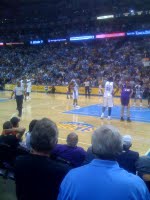 There's no question that the Nuggets have improved vastly as the regular season and postseason have moved along.

But they're not this good.

But they're not good enough to overcome all those deficiencies and beat a 65-win Lakers team (although they're pretty damn close, the Nuggets only lost by six...thanks mostly to a great defensive effort until the referees whistled them out of the game).

And now some real work must be done in order for the Nuggets to get back into this series.

For starters, Carmelo Anthony must remember that he's unguardable when driving to the basket. For Melo to chuck seven three-pointers and make only one in a Western Conference Finals game is totally unacceptable. This isn't the All-Star Game. Also, Melo must stay away from foul trouble. You're a superstar now, Melo. Superstars don't pick up their fifth foul early. Melo not being able to guard Kobe - who proved yet again why he's the best cold blooded killer in the NBA - cost the Nuggets dearly in Game 3.

J.R. Smith must embrace his mid-range game. On the few possessions that J.R. didn't settle for a three-point shot and drove the ball halfway towards the basket, he was very effective. He might have made all his mid-range shots.

When they're not dunking, Kenyon Martin and Nene must finish stronger around the basket. The Lakers are tall - really tall - so anything short of a determined, focused layup attempt isn't going to fly.

George Karl needs to learn a) how to draw up an in-bounds play and b) that Dahntay Jones is allowed to come back into the game after he's pulled at his normal rotation point. Regarding the first point, for a coach of Karl's caliber to preside over a second errant in-bounds pass after what happened in Game 1 is in-con-thee-vable!! Moronic. Idiotic. You name it. When I went to Fat Lever/Wayne Cooper Basketball Camp at 10 years old we learned how to run an in-bounds play for chrissakes. And on the second point, why does Karl treat Dahntay like a pitcher in a baseball game? - i.e. once he's pulled, he's benched for good. We should never, ever, ever, ever see a backcourt featuring Chauncey Billups and Anthony Carter when Kobe Bryant is on the floor. Did I say never, ever, ever, ever enough yet?!

And the Nuggets players, all the players, must maintain their poise and stay way from silly fouls and stupid technical fouls. It's one thing when you get screwed on a bad call and you go after the refs to fire up your team and get a call your way later on, but Linas Kleiza, Anthony Carter and J.R. Smith's three technicals were nothing but unnecessary momentum killers.

There's no doubt that the referees did the Nuggets no favors tonight, but that can't be used as an excuse. As discussed throughout the regular season, when the Nuggets shoot more free throws than fouls committed, they almost always win. Tonight, the free throw attempts-to-personal fouls disparity was even.

Even with this crushing defeat, you can't help but be optimistic going into Game 4. As pointed out in the Game 3 preview and on the radio with Sandy Clough before tipoff, I said the Nuggets needed another superstar night from Carmelo Anthony and Chauncey Billups, had to hold Kobe Bryant to under 35 points and needed a big night from both J.R. Smith and Chris "Birdman" Andersen. At the game's conclusion, the Nuggets only got one of those five things: the big night from the Birdman. Throw in a ghastly 39.3% shooting night from the field, the horrendous 18.5% shooting night from behind the arc and the rampant foul calls, and the Nuggets weren't going up 2-1 in this series.

And yet they were up by two with 1:30 remaining, were in this game up until Karl failed to draw up a simple in-bounds play for the second time in three games and lost by just six points.

So maybe - just maybe - the Nuggets are this good after all. I guess we'll find out on Monday night.

While reading this post, you have to listen to this Nuggets themed song "None of That" by Denver artist Kajmir Royale. It will get you fired up for tipoff!

Before kicking off today's preview, I have to ask: how @#$%& incredible has this conference finals been thus far?! Four games decided by an average of 1.75 points per game culminating with LeBron James unreal game-winner last night. Are you kidding me?!!

But as a Nuggets fan first and an NBA fan second, I'm ready to see the first one-sided victory and for the Nuggets to be on the right side of that victory tonight.

Everyone in Denver (and probably Los Angeles, too) spent yesterday debating the following: should the Nuggets be up 2-0, down 0-2 or was this meant to be a split, with the Nuggets giving away Game 1 and the Lakers giving away 2?

I think it's fair to say that the Nuggets should be up 2-0. Because while the Nuggets gave away Game 1 with 30 seconds left, the Lakers might have given away Game 2 midway through the second quarter. In other words, the Lakers had an entire second half to fight back from their giveaway whereas the Nuggets never had time to recover from "the worst pass in franchise history" that took place on Tuesday night.

But we are where we are, and I believe by winning the second game rather than the first puts the Nuggets in much better position going forward in this series. Winning Game 2 - especially after what happened on Tuesday and George Karl's embarrassing "woe is us" postgame press conference - was infinitely more difficult than winning Game 1. And what made Game 2 so special was that the Nuggets crawled back into the game and earned the victory, it wasn't just handed to them like an Anthony Carter-to-Trevor Ariza inbounds pass (alright, enough with that reference but for now on, every bad pass thrown by a Nugget in a crucial situation will be compared with that one).

Entering Game 3, the Lakers will be bringing their full A-game. The Lakers - and Kobe Bryant and Phil Jackson in particular - know damn well that ceding more confidence to the Nuggets will be their death knell in this series. Just as Game 1 was, in theory, the one the Nuggets had to steal (until they proved otherwise), Game 3 is the one the Lakers must swipe away. So for the Nuggets to hold home court and prevail, they need to act like they've been here before and not just be happy to be home with a 1-1 split.

I see two huge pluses for the Nuggets tonight: J.R. Smith and Chris "Birdman" Andersen. Both have been relative non-factors in this series thus far, and yet they've been exceptional at home throughout the second half of the regular season and the entire postseason. It's as if J.R. and Birdman are solar panels and the Pepsi Center crowd is their sunshine; they just feed off the energy and play at a remarkably higher level.

To get this series to Nuggets 2, Lakers 1 I'm looking for another superstar night from Carmelo Anthony and Chauncey Billups, holding Kobe to under 35 points (preferably on 30 field goal attempts), pounding the Lakers inside both on offense and defense, and - finally - getting a good game out of both J.R. and Birdman.

TWO things before I take off for the day...

1) I'm scheduled to appear on 104.3 The Fan around 5:05pm today. I say scheduled because I tend to get bumped/moved around sometimes, but try to listen and if I go on, I'll get a recording this time to post on the blog.

2) Who's going to the game tonight? If you're going and want to meet up at Blue Sky before/afterward for a drink, email me at denverstiffs@gmail.com

Let's go, Nuggets. Act like you've been there before! See you all tonight!!