Share All sharing options for: Taking care of business...

We were a Utah Jazz loss short of a perfect Sunday in Nuggets Nation. First and foremost, our Nuggets took care of business by easily dismantling the Timberwolves and thus giving the starters a much needed and much deserved fourth quarter rest. The only thing surprising about this game was Chauncey Billups' two-handed dunk. I still can't believe he did it. In fact, I don't think I've seen Chauncey dunk a ball since the state championships when his GW squad dismantled my Cherry Creek squad in the semi-finals. Chauncey dunking also brought back memories of when Alex English would dunk the ball like once a year just to see if we were paying attention.

Beyond the Nuggets victory, we were rewarded today with the Trailblazers and Spurs losing, as well as the Mavericks winning - keeping the Mavericks hopes alive of possibly catching the Jazz or Hornets and securing the seventh seed.

The bottom line is that the Nuggets just tied their second best NBA record for victories in a season and still have four games to go. That remarkable achievement hasn't quite sunk in yet. 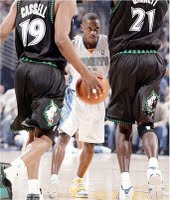 While the Nuggets venture off to Minneapolis today to (hopefully) pound the lowly Timberwolves, six of the Nuggets possible playoff opponents will play meaningful games and four of them are playing each other. First up, the San Antonio Spurs visit the Cleveland Cavaliers at 11am. Then at 1:30pm, the Phoenix Suns play at the Dallas Mavericks. Both those games are on ABC. And at 5pm we have a pair of "can't they both lose?" games when the Utah Jazz visit the New Orleans Hornets and the Portland Trailblazers visit the Houston Rockets.

So who do we want to lose?

First off, if the playoffs were to start today the Nuggets would face Utah in the first round and most likely San Antonio in the second round (after getting pushed around by Utah in a merciless seven-game series). While I'm confident that the Nuggets would beat the Jazz in an opening round series, I have no illusions about how difficult it would be to do so. Therefore, we should really be rooting for the Mavericks these days - a team the Nuggets have swept (albeit with some difficulty) this season. As an NBA fan, I'd love to see a Shaquille O'Neal-led Suns team face the Kobe Bryant-led Los Angeles Lakers, but as a Nuggets fan, I want Dallas to overtake Utah for that seventh seed. It's also the more likely scenario than Utah taking the sixth seed over New Orleans.

Beginning with today's game at New Orleans, four of Utah's final six games are on the road against likely Western Conference playoff teams, including a Wednesday matchup at Dallas. Dallas and New Orleans have really tough schedules, too. After today's matchup with Phoenix, the Mavericks have four games against playoff opponents, but three are at home and none are against the West's top three teams. Meanwhile, the Hornets wrap up their season with every game against a playoff calibre opponent with four on the road and three at home. It's remotely possible that Dallas could move up to the sixth seed with New Orleans dropping into seventh and Utah eighth. I'd be happy with either a New Orleans or a Dallas first round matchup.

Higher up the food chain, Nuggets fans want the Blazers to start losing games already so the Nuggets can secure the division title. The Blazers have won four straight and 17 out of their last 22. So when they play at Houston today, we should root for the Rockets. And of course, everyone in Nuggets Nation will be cheering LeBron James and the Cavaliers to end their two-game losing streak by beating the Spurs into submission in Cleveland this morning.

Oh, and lets not forget that we need the Nuggets to win, too. Go Nuggets!!