The Hornets should save the jet fuel...

Share All sharing options for: The Hornets should save the jet fuel... 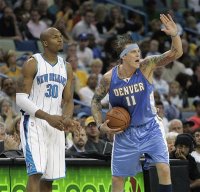 Did the Nuggets cover the spread?

The Nuggets figured out how to get Nene going all right. And Carmelo Anthony, too. And Chauncey Billups. And J.R. Smith. And Dahntay Jones. And Kenyon Martin. And Chris Andersen. And Linas Kleiza. And...

You get the idea.

As noted in the headline of this game recap, the Hornets should seriously consider NOT flying to Denver tonight and just save the jet fuel for next season, because their season is over. As my friend Justin who was watching the game with me and 12 other Nuggets fans aptly pointed out: "It's losses like this that ruin franchises for 10 years." When you're on the wrong side of a 53 year old playoff blowout record, that's exactly what might happen.

But luckily for Nuggets fans, the fate of the Hornets aren't our problem. Now we just need to focus on Game 5 and deliver the knockout punch that this franchise has been desperately seeking since 1994.

A few days removed from an NFL Draft that has left Broncos fans gravely disappointed (after a season and an offseason chock full of disappointment) and with a new Rockies season already forgettable and heading for disaster, Denver sports fans needed a pick me up. And thanks to our Nuggets, we got one in a big, big, big way. I don't want to hype this win up too much more for fear of jinxing Game 5. But it's clear that if the Nuggets can just maintain their focus against these stingless Hornets, a visit to Round 2 will easily be theirs.

Congrats to George Karl and the Nuggets on this historically big win. A couple more like these and your doubters and naysayers will be few and far between.

After a more-than-solid 12-point, 14-rebound and one block night in the Nuggets' Game 1 over the stingless Hornets, Nene has delivered two sub-par performances, culminating with Saturday's unacceptable two-point and six-foul showing. Everyone has an off night, but the label of "unacceptable" is apt given that Hornets' starting center Tyson Chandler remains banged up and ineffective (Chandler himself had just two points to go with his six fouls in Game 3) and the Hornets' backup "big man" is Sean Marks. With Nene weakened by foul trouble and an all around bad performance, Marks delivered the best white-stiff-off-the-bench-in-a-Game 3 performance since Bill Hanzlik led the Nuggets to a huge Game 3 win at Dallas in 1988.

For the Nuggets to beat the Hornets tonight and get this series back to Denver for a Nuggets series victory, we'll need the Nene from Game 1 back. This can be accomplished by feeding him the ball early and often, hoping he'll punish Chandler down low out of the gate.

Three games in, it's no longer a subjective question as to who the better team is in this series. It's now objective and the answer is Denver. Even if the two teams' starters play themselves even, the Hornets don't have the firepower off the bench to contend with our Nuggets. Thanks to fortunate three-point shooting, a bad game from Nene and a poorly played second half by the Nuggets, the Hornets stole Game 3. I don't see those same things happening tonight and I suspect we'll know a lot more in the first five minutes based on how Nene responds to that Game 3 debacle.