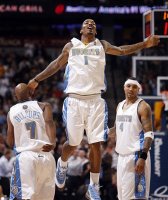 First off, congratulations to the Nuggets players, head coach George Karl and the entire organization for securing a legitimate Northwest Division title while tying the Nuggets NBA franchise record with 54 wins and guaranteeing themselves of finishing no worse than third in the Western Conference. I know the team technically won another such title in 2005-06, but those Nuggets won just 44 games and didn't have home court in the first round.

Secondly, pardon me for being the sourpuss at the party, but while I of all people appreciate the historical significance of tonight's victory and J.R. Smith's performance in particular (after all, I've been a Nuggets fan for 33 years), part of me wishes I hadn't actually seen the game. For those who didn't watch the game, you'll look at the box score and say: "Wow! The Nuggets beat the Kings by 20! J.R. had a Nuggets all-time best 11 three-pointers! Carmelo Anthony almost had a triple-double! Linas Kleiza had a nice game off the bench! And Chris Andersen had five blocks! What a game!" And you'll go into the weekend confident about the Nuggets chances in the postseason.

But for those of us who watched the game (while simultaneously monitoring the Trail Blazers crush the Thunder, the Rockets crush the Hornets and the Spurs crush the Warriors...all from the opening tip), you have to be a little concerned, right? I mean, this game was headed for a Broncos-esque end-of-season collapse until Kleiza aggressively took the ball to the basket and Smith had a historical three-point explosion (one shy of the NBA's all-time record of 12 three-pointers made, shared by Kobe Bryant and, no joke, Donyell Marshall) towards the end of the third quarter. I'll put it bluntly: you shouldn't need 11 three-pointers from J.R. Smith to beat the NBA's worst team at home in the most important game of the season.

Don't let me spoil the party, though and maybe we can write off the Nuggets struggles to tightness knowing history was on the line. At the end of the day, 54 wins is something we can and should all be really proud of, and it was fitting that the 54th win - along with an epic performance from Smith - came on "Fan Appreciation Night."

There's still a little more work to do, of course. If the Nuggets are intent on finishing second in the conference, on Wednesday night they'll have to go into the lion's den - Portland - and play a hell of a lot better than they did tonight. Although it's possible - possible - that the Rockets could lose at the Mavericks by the end of the first quarter in that Portland game, at which point the Nuggets would only be playing for the franchise win record of 55.

Congratulations again, Nuggets. For the first time in a long time, you didn't play like Stiffs in the regular season!

There hasn't been a late-season Nuggets/Kings game with this much importance since the two franchises faced off in McNichols Arena on Sunday, April 23rd, 1995. The Kings entered that game with 39 wins. The Nuggets with 40. Had the Kings won that game they would have tied Denver with 40 wins apiece, controlled the season series and thus, squeaked into the playoffs ahead of Denver. Thanks to 23 points from Reggie Williams and an eight-of-nine shooting night off the bench from Brian "Bison Dele" Williams, Denver defeated Sacramento 102-89 that night. The Nuggets reward? A one-versus-eight first round sweep by the San Antonio Spurs, culminating with Nuggets fans inexcusably throwing debris onto the court at the refs in Game 3, forcing then-Nuggets "coach" and team "president" Bernie Bickerstaff to grab the microphone and attempted to calm the fans down in the middle of the game. The Bernie Bickerstaff Era, ladies and gentlemen!

14 years later, both the Spurs and Kings could affect how the Nuggets terrific (so far) 2008-09 season will conclude. The Spurs visited Sacramento on Sunday night with their hopes of finishing higher than fourth in the Western Conference on life support. Continuing their trend of conceding regular season games to their opponents, the Spurs rested star Tim Duncan and yet still managed to (literally) steal a win away from the Kings.

Well actually, the refs did.

With three seconds left and the home town shot clock clearly expired, the Spurs' Michael Finley made a last ditch three-point shot to put the Spurs ahead for three. Anxious to get out of Sacramento (can you blame them?) the refs not only failed to call the obvious shot-clock violation, but they also refused to review the play and gave the Kings a mere one second to get a final shot off. If this hadn't taken place against such a meaningless franchise, this would have been the controversy of the season. Imagine that happening to the Lakers or Celtics?

The Spurs' unfair and improbable victory makes the once unlikely chance that the Nuggets could still end up fifth in the Western Conference suddenly a reality if they don't play their cards right.

To be fair, it wasn't a guarantee that the Kings would have made a shot with the three seconds remaining they should have had or beaten the Spurs in overtime, but they deserved a chance. The Kings organization deserves some blame, as well. Not only did the neon red shot clock lights not come on when the shot clock expired, but the horn could barely be heard (at least from what I could tell on TV). I guess they do need a new stadium after all.

Regardless of that inexcusably atrocious outcome in Sactown that I'm sure the NBA will apologize for, the Nuggets aren't playing for the fourth-seed anyway. We're playing for the number two spot. And in order to get there, the Nuggets will likely need to "win out" by beating the Kings in Denver tonight and besting the Trail Blazers in Portland on Wednesday. A win against the lowly Kings guarantees the Nuggets a three-seed and if the Houston Rockets lose one of their next two, the two-seed is ours. But if the Nuggets split their last two games (very likely) and the Rockets win out, we're playing Game 7 on the road in the second round...if we get that far.

But lets not look too far ahead, as our Nuggets were guilty of doing against the Kings at Pepsi Center last season when the Kings shocked the Nuggets with a 118-115 victory. That defeat killed the Nuggets chances of finishing higher than eighth in the Western Conference. (Remember, that was the "horseshit team" game). A loss to Sacramento in Denver tonight, in addition to the sheer embarrassment of it, could land the Nuggets in the Western Conference's fifth spot. The Nuggets wasted 50 wins last year by screwing around in the regular season. Lets not waste 53 wins this year.

So who are these Kings anyway? I played a game with a friend a few weeks ago in which I boasted that I could name at least 10 players on every NBA team. With the Kings, I could only get to seven: Kevin Martin, Andres Nocioni, Jason Thompson, Spencer Hawes, Francisco Garcia, Beno Udrih and Bobby Jackson (I've been told that Mahmoud Abdul-Rauf, pictured above, is no longer with the organization). Part of the reason I could only get to seven players is because these Kings are dreadful. They've lost eight straight, won an NBA worst 16 games (down from a respectable 38 last season considering their lack of talent) and their best player - Martin - has been out for the last six games and is likely done for the season.

But as bad as these Kings are, they managed to defeat our Nuggets in Sacramento just a month ago. We can only hope that Nuggets head coach George Karl and his players are better prepared this time around. Because thanks to the Spurs, this must-win game against the Kings just became a must-must-win game.