Taking the sting out of the Hornets (Nuggets/Hornets Playoff Preview)...

Share All sharing options for: Taking the sting out of the Hornets (Nuggets/Hornets Playoff Preview)... 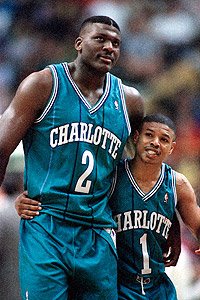 A few readers weren't thrilled with Denver Stiffs decision to outline the Nuggets various deficiencies entering the postseason against the New Orleans Hornets. But fortunately for Nuggets fans, the Hornets have even bigger problems. And if the Nuggets can exploit them properly, this series could be over in five or six games (ok, make that seven games...but not a game more!).

Here's a category-by-category comparison of the two teams...

I know this story is already getting old, but you can't talk about the Hornets without mentioning the injuries to Tyson Chandler (foot), Peja Stojakovic (back) and James Posey (elbow). Chandler missed 37 games this season and played like he was missing in half of the 45 games he appeared in. Clearly bothered by his injured foot, Chandler posted his Hornets-career lows in scoring, rebounding and field goal percentage. After missing 15 straight games, Chandler played 20 minutes against the banged up Spurs in the final game of the season and managed to pull down a mere three rebounds while not blocking a single shot. Stojakovic hasn't fared much better. Having missed 21 games, Stojakovic posted the worst shooting percentage (39.9%) and scoring average (13.3 ppg) of his career since his rookie season 11 years ago.

On the Nuggets side, Kenyon Martin seems to be relatively healthy after battling back spasms all season and a bruised rib recently. And Carmelo Anthony has played better since breaking his hand, because it enabled him to rest his sore elbows. 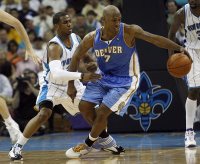 It's pretty rare when your team has a top-five point guard but your opposition has the league's best point guard. If you're curious as to how the Hornets won 49 games in spite of being decimated by injuries, having no bench and ranking 26th in scoring, 26th in blocked shots and 27th in rebounding, look no further than #3 - Chris Paul. Paul just completed the rarest of feats in NBA history by becoming the first player ever to lead the league in assists and steals for two consecutive seasons while also being the first player ever to do that while also finishing in the top ten in scoring. Wow.

But in Chauncey Billups, the Nuggets don't just have a fine point guard who helped complete their "Extreme Makeover" this season, but a former NBA Finals MVP. Believe it or not, only six active NBA players have a Finals MVP Award. And you won't see Billups barking at his teammates with that "what the @#$%?" look on his face that we regularly from Paul. That being said, the advantage is still Paul's, even though the two will rarely guard each other.

Starting shooting guard is the weakest link for both the Nuggets and Hornets. The Hornets start Rasual Butler and his erratic 43.3% field goal shooting (up from 35% last season). Check out Butler's shooting in the final eight games of the season as the Hornets were fighting desperately for a home court advantage: 3-14, 9-15, 3-9, 4-11, 2-7, 5-12, 1-9, 4-11 (and no, those aren't J.R. Smith numbers from last season). And you wonder why the Hornets lost six of their last eight.

But while we all admire and respect the nightly effort the Nuggets get from their shooting guard Dahntay Jones - especially on the defensive end - we still cringe when the ball is in his hands on the offensive end of the floor. And I'm still not convinced that Jones is as good a defender as everyone says he is. He falls in that shooting guard "we all say he's a good defender because he can't shoot" category, like his predecessors in Denver Yakhouba Diawara, Tariq Abdul-Wahad and Bryant Stith. But to Jones' credit, he's a hard working pest who will use his six fouls to bother Chris Paul throughout this series.

At small forward, the Hornets have one of the best shooters in NBA history in Peja Stojakovic. But as noted above, Stojakovic posted post-rookie season lows this year in shooting percentage and scoring due to an assortment of injuries. In 44 minutes of playing time in a must win-game against the Spurs on Wednesday night, Stojakovic made two-of-eight shot attempts. And he's an atrocious defender to boot.

Meanwhile, the Nuggets have the NBA's third best small forward in Carmelo Anthony (behind only LeBron James and Paul Pierce) who - in theory - should be desperate to get out of the playoffs' first round and prove his many naysayers wrong. In 21 games since being suspended by the Nuggets for insubordination on March 3rd, Anthony has averaged 25.4 ppg - including a 29 point and 43 point outburst against the Hornets and Mavericks, respectively - all while leading the Nuggets to a 15-6 record to finish the season.

One of the few categories where the Nuggets come up short against the Hornets is at the four spot, thanks to two-time All-Star David West anchoring the position for New Orleans. But the Nuggets Kenyon Martin is no slouch, especially after getting himself in the best shape of his career since undergoing microfracture surgery on both knees. Unfortunately, K-Mart didn't undergo much needed mid-range jump shot surgery during his recovery period.

A consistent mid-range jump shot isn't West's problem, however. In fact, of all the power forwards in the NBA, West possesses one of the finer shooting touches and has to be defended far from the basket. 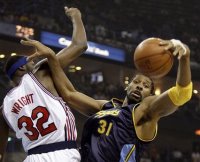 As noted above under "Health", Hornets center Tyson Chandler is not his 2007-08 self (who incidentally played a large role in my fantasy basketball team finishing in second place, regrettably my highest finish ever). Instead, whether it's due to injuries or a bruised ego from almost being traded, Chandler has reverted into the player he was in Chicago before New Orleans acquired him.

The Nuggets, on the other hand, have benefited greatly from Nene's finest season of his career. For the first time since Calvin Natt anchored the Nuggets power forward spot, the Nuggets have a legitimate low-post scoring threat who's also a true shut down defender. Nene's only downside compared with Chandler is his height. I've always said that Nene is generously listed at 6'11" (he's more like 6'9") and he seems to struggle a bit against the taller centers in the league. But given Chandler's recent bout with injuries, Nene should be able to muscle him around.

Let's be frank: the Hornets don't have any depth. Even former Denver Stiff Ryan Bowen maintains a roster spot. The Hornets basically have a six-man rotation, with another former Nugget in James Posey being the only impact player off the bench. Their low-end bench players have serious playoff experience, however, with Devin Brown (yet another former Nugget for all of three games), Antonio Daniels and of course Posey having won NBA Finals rings. But Brown and Daniels rarely crack 10 minutes of playing time and are non-factors. The rest of the Hornets' bench features a stiff backup center in Hilton Armstrong, the only New Zealander to play in the NBA, Sean Marks, and Morris Peterson.

Meanwhile, the Nuggets - with Chris "Birdman" Andersen, Sixth Man and Most Improved candidate J.R. Smith, Anthony Carter, Renaldo Balkman and Linas Kleiza - have their best bench since the 1993-94 squad that brought Robert Pack, Brian "Bison Dele" Williams, Rodney Rogers and Tom Hammonds off the pine. And of course that was the last Nuggets team to win a playoff series.

Smith is basically a starter in terms of minutes played, as is Posey who remains one of the NBA's most clutch performers (remember his big, go-ahead three-pointer at Pepsi Center on Thanksgiving Night to sink the Nuggets?). But even if Smith/Posey cancel each other out, the rest of the Nuggets bench is far superior to anything the Hornets have to offer. Maybe the Hornets should have brought back the Birdman instead of allowing the Nuggets to poach him for nothing.

In nine seasons as an NBA head coach, Byron Scott has coached in two NBA Finals and has never lost a first round playoff series. But he's also missed the postseason four times. In 21 seasons as an NBA head coach, George Karl has coached in only one NBA Finals, has lost in the first round 10 times but has missed the postseason (remarkably) only three times. The only number Nuggets fans care about, though, is 3-16: Karl's playoff coaching record with Denver. And Karl himself has admitted that a playoff series win will be the ultimate measure of his success this season.

Scott was able to overcome a litany of injuries, a weak bench and a possible Chandler trade to guide the Hornets to a very respectable 49 wins in the brutal Southwest Division. Karl led the Nuggets to their NBA franchise tying best 54 wins in a season that many expected them to miss the playoffs altogether. Both coaches have done a fine job this season.

During Game 1 of the Hornets/Spurs series last year, (the alternate version of) Hugo the Hornet dunked a basketball through a ring of fire after the first quarter. Because the fire wasn't extinguished properly, there was a 19-minute delay in the game. Just a few months later the Nuggets mascot, Rocky - who doesn't need a stunt double to dunk - was inducted into the Mascot Hall of Fame. Enough said.

The Nuggets should win this series in five games, but probably won't. A lot of pundits will predict the Nuggets in six, but I don't see the Nuggets winning a Game 6 on the road. I see this series ending in five or seven, with seven being more likely.