Sixth Man of the Year forecast: What about J.R.?...

Share All sharing options for: Sixth Man of the Year forecast: What about J.R.?... 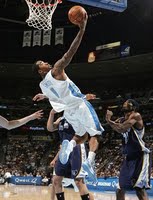 No Nugget has ever won the NBA's Sixth Man of the Year Award, and I suspect that drought will continue when this year's award is handed out. But J.R. Smith - the Nuggets backup shooting guard - might give a Nugget the best shot at this award since Walter "the Greyhound" Davis delivered 15.6 points per game in just 22.9 minutes per game back in 1988-89. Smith gets more minutes per game (27.5) than the Greyhound did, but averages less points at 15.0 ppg. But Smith's 15.0 is misleading.

Smith's solid and surprisingly consistent end-of-season play seems to have begun after the Carmelo Anthony suspension which forced Melo to sit out in a loss to the Pistons on March 3rd. Since that loss - beginning with a big home win against the Trail Blazers - the Nuggets have won 14 of 19 games, and Smith has been a huge part of the Nuggets success. During this 19-game march to 53 regular season wins, Smith has averaged 19.6 ppg on 49.1% shooting, a semi-respectable 2.9 apg and - his specialty - 3.2 made three-pointers per game, including an astounding eight and then seven three-pointers made in back-to-back wins over the Jazz and Knicks this month (while wearing a green jersey, it should be pointed out). And as pointed out by Benjamin Hochman of the Denver Post, Smith has made five quarter-ending buzzer-beater three-pointers during this stretch of games.

But as well as Smith has played lately, the Mavericks' Jason Terry has been doing it all season. Struggling with injuries to fellow scorers Jerry Stackhouse and Josh Howard, the Mavericks have had to count on Terry to deliver off the bench. And Terry has done so with a near career high 19.6 ppg and an assortment of big shots in multiple must-win games for the Mavs. Even with eight games missed due to a hand injury, I don't see Terry derailed on his way to winning the NBA's Sixth Man of the Year.

Other players in the conversation are the Warriors' Corey Maggette, the Knicks Nate Robinson and former Sixth Man Award winners Manu Ginobili of the Spurs and Leandro Barbosa of the Suns. But Maggette and Robinson are selfish players on bad teams and Ginobili (only 44 games played), Maggette (51) and Barbosa (68 so far) missed a lot of games due to injury. A dark horse candidate is Timberwolves rookie Kevin Love and his near nightly double-double. Call me a homer, but I think J.R. has done more for the Nuggets in 2008-09 than any of those guys did for their teams. But while it might be tempting to pencil in J.R. as the NBA's Sixth Man of the Year, any objective observer - including this one - will likely go with Terry.

Now if only Smith had worn that green jersey from the start of the season...