[UPDATED] Should we be worrying about the Bobcats?...

Share All sharing options for: [UPDATED] Should we be worrying about the Bobcats?... 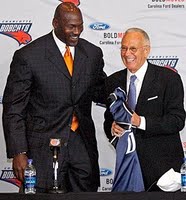 With the Charlotte Bobcats sneaking back into the Eastern Conference playoff picture (although their efforts had a huge setback tonight after losing to the Celtics in double overtime), I've been getting a lot of emails asking me to write a post about what this would mean to the Nuggets. As most die-hard Nuggets fans remember, our Nuggets traded their first round pick in the 2008 NBA Draft to the Bobcats in exchange for a future, overly protected first rounder.

The going assumption among Nuggets fans lately - as reported when the news broke last summer - has been if the Bobcats make the playoffs the Nuggets will end up with the Bobcats' 2009 first round pick, as it's only lottery protected. If that were the case, Charlotte's pick would be the Nuggets only first round draft choice, as they jettisoned their own pick along with Chucky Atkins to acquire Johan Petro earlier this season.

So if the Bobcats make the playoffs, are the Nuggets getting their pick or not?

I did some digging online, and according to the Charlotte Observer's Rick Bonnell, the Bobcats' General Manager Rod Higgins claims that the 2009 first round pick is protected through the 20th pick in the draft, even though a "league document" (whatever that means) indicates that the pick is only lottery protected. In other words, according to Bonnell - who wrote this on March 9th - the Nuggets won't get the pick no matter what. But ProSportsTransactions.com - a usually reliable source - still states that the pick is only protected through the lottery.

If Bonnell is correct, I'm sure the Nuggets are happy as they're still in their full fledged get-under-the-luxury-tax-at-all-costs-mode and want nothing to do with a first round draft pick and the guaranteed salary that accompanies it.

Normally, I'd be more upset about the possibility of the Nuggets ditching their first round pick for the fourth consecutive draft just to save a few dollars, but not drafting in the first round actually makes the prospect of re-signing Chris "Birdman" Andersen more realistic.* And I'd rather have the Birdman for two or three more seasons than a late round rookie who won't get any minutes anyway.

*Don't forget to sign the Bring Back Birdman petition if you haven't already!

[UPDATED] I just confirmed with several sources that the Charlotte Observer's Rick Bonnell and the Bobcats' own Rod Higgins are WRONG. IF the Bobcats make the playoffs, as previously reported the Nuggets would get their first round pick. So should we be rooting for or against the Bobcats?