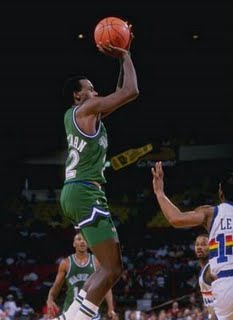 I probably should have titled this post "When Two Hot Teams Collide" because that's exactly what's happening on Sunday when the Mavericks face off against our Nuggets at 1:30. But before we look forward, I have to spend a quick moment looking back (this site is, after all, Denver "Stiffs", remember?).

The last time the Nuggets won 54 games, captured a division title and won a first round series in a fifth game on their home floor was 1988. And fittingly, the Nuggets faced off in the following round against the Dallas Mavericks that year, just as they will this Sunday.

But even though this year's Mavericks have been impressive as of late, they couldn't hold a candle to the 1987-88 version. That team was deep and talented with Rolando Blackman (a four-time All-Star) and Derek Harper in the backcourt, Mark Aguirre (a three-time All-Star) and Sam Perkins at forward and James Donaldson (a one-time All-Star) anchoring the middle. Off the bench, those Mavericks featured Detlef Schrempf (also a three-time All-Star), Brad Davis and Roy Tarpley (who could have been an All-Star had he not ironed his girlfriend's stomach and gotten into drugs). In the NBA's second round that year, those Mavericks spoiled the Nuggets Cinderella season by turning a 2-1 Nuggets lead into a 4-2 series rout, including a 21 and a 13-point beat down in the Mavericks final two home games. To be fair, the Nuggets were besieged by injuries to Fat Lever and Jay Vincent, but those Mavericks meant business. They had only won one less game than the Nuggets that season and ended up taking the Lakers to seven games in the conference finals.

(On a side note, the last time I saw Blackman in Denver was during the 2005 All-Star Game. We were both waiting in line inside the bathroom in the main concourse area when a couple of guys - and this is no joke - dragged a garbage bin into the bathroom and used the lid to break out a shell game. They were immediately surrounded by 30 or so others, cash in hand, ready to partake in this gambling endeavor. In an instant, that Pepsi Center bathroom might as well had been a back alley in Brooklyn or Queens. Being right next to each other, Blackman and I glanced at each other, mutually rolled our eyes and walked out.)

Fortunately for the 2008-09 Nuggets Blackman, Aguirre, Harper and the rest of those Mavericks are long gone (although I think just about all of them except Tarpley became assistant coaches at some point during the Mark Cuban "Hire-Every-Ex-Maverick-as-an-Assistant-Coach" Era) and in their place we get to face off against Jason Terry, Dirk Nowitzki, Jason Kidd and Josh Howard. You know, the Mavericks that the Nuggets beat all four times this season...albeit in four closely contested games.

So with both teams coming off impressive 4-1 first round victories, how do they stack up against each other?

After looking like they were going to cede the eighth and final playoff spot to the Suns as late in the season as early March, the Mavericks got their act together and reeled off seven wins in their last nine regular season games before easily dismantling the Spurs in five. But before that late run, they were basically playing .500 ball in March. The Nuggets, meanwhile, lost only seven games in March (one of which was a meaningless game at Portland), had a five and an eight game winning streak and didn't just dismantle their playoff opponent - the Hornets - in five, but may have destroyed their franchise for years to come.

The Mavericks start all six feet of Jose Juan Barea while the Nuggets bring Dahntay Jones' relentless defensive intensity to the table at the two-spot. Say what you want about Barea, but he torched the Nuggets for 22 points, including five three-pointers, in the two teams' March 27th matchup which the Nuggets barely won. It was as if the Nuggets couldn't find the little Barea all night.

But let's be frank, the shooting guard matchup isn't about Barea vs. Jones but rather Sixth Man Award Winner Jason Terry vs. Sixth Man Award Runner-Up J.R. Smith, each of whom consume the bulk of the minutes at this position. As much as we love J.R., he's not quite on Terry's level. Terry has been hitting big time shots in big time games for a while now, and has NBA Finals experience. Until J.R. proves otherwise, the edge goes to Terry.

Much has been made about two of the Nuggets four regular season victories over Dallas not including the Mavericks' (former All-Star) small forward Josh Howard. Am I missing something here? Isn't this the same Howard who took nights off this season against bad teams and yet didn't have a problem playing mildly hurt against good teams? The same Howard who dissed the national anthem in the off-season? The same Howard who threw himself a late night birthday party in the middle of a playoff series last year?

Carmelo Anthony is playing the best basketball of his career right now, including a 43-point, 11-rebound, game-winning basket outburst against the Mavericks on March 27th. Howard has admittedly played much better in the post-season than he has all season long, but he still isn't anywhere near Melo's league.

The advantage of sitting closer to the floor than I ever have at Nuggets games for these playoffs is that I have a whole new appreciation for Kenyon Martin's defensive ability when he's focused. K-Mart held the Hornets' David West (an "All-Star") to 40% field goal shooting in one of the best singular defensive performances we've ever seen in a Nuggets' uniform.

Unfortunately for K-Mart, the Mavericks' Dirk Nowitzki is no David West and this isn't his first rodeo. Nowitzki's - justifiably or not - has been criticized for being an unworthy MVP and then playing cowardly against the 8th-seeded Warriors two years ago, choking away a sure-fire NBA Finals victory in 2006 after being up 2-0 and leading by a wide margin in Game 3, and having a low "clutch shooting percentage" as of late (40.6% compared to Melo's exceptional 56.5% this season). But Nowitzki won that MVP for a reason and remains the best shooting power forward in the NBA. Check out this stat: from February 27th until the playoffs began, Nowitzki never scored less than 20 points in a single game. That was 25 straight 20+ point games.

The Nuggets starting center Nene appeared in three of the Nuggets' four games against the Mavericks in the regular season and had a respectable outing each time. The Mavericks center Erick Dampier never scored more than six points in a single game against the Nuggets this season, and put forth a paltry five-point, five-rebound effort in the one game that Nene missed due to league suspension. Dampier continues to underachieve for the Mavericks and his $13 million contract due in two seasons from now makes K-Mart's contract look reasonable. 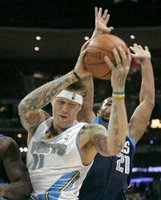 Even though Terry gets the edge over Smith at the sixth man spot, the rest of the bench isn't even close. Beyond Terry, the Mavericks only have Antoine Wright and Brandon Bass to turn to, whereas the Nuggets have Chris "Birdman" Andersen, Anthony Carter, Linas Kleiza and Renaldo Balkman if need be. In other words, the Mavericks don't even have a legitimate backup center to contend with Birdman, and yet Birdman is better than Dampier.

I'm a Rick Carlisle fan. He has been reasonably successful everywhere he has coached and weathered a slew of injuries and a thin roster to guide the Mavericks to a respectable sixth-seed when just weeks earlier they seemed destined for the West's ninth spot. Carlisle also does a lot of things that the Nuggets coach George Karl doesn't - notably calling timeouts to block opposing teams' runs before they get out of hand.

But it's hard to argue with the Madness of King George's results this season, especially after that exceptional ass-whipping over the Hornets. And while Carlisle has done a fine job in his first go-around with the Mavericks, I believe Karl knows his own players much better than Carlisle knows his.

I'm an NBA degenerate. So much so, that I could probably name two-thirds of the league's mascots if I had to. And yet until writing this piece, I had no clue who the Mavericks mascot was. After doing some research, the Mavericks' mascot is apparently named "Champ" and he purports to be a horse. The only problem is he looks nothing like a horse but rather a creepy blue dragon with a smirk on its face as if a registered sex offender is wearing that god awful costume.

Meanwhile, the Nuggets' "Super Mascot" Rocky has been making his behind-the-back half court shot with more and more consistency lately and his scoreboard video where he dates a Hornets fan was one of his best yet. This matchup isn't even close. 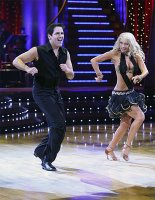 You can't discuss the Mavericks without mentioning their owner, Mark Cuban. Longtime readers of this blog know I'm strongly in the pro-Cuban camp. I think he's great for the game and generally behaves with the same passion and enthusiasm that I would if I owned an NBA team. I've also had the opportunity to chat with Cuban for a few minutes in person (we'll see if he's amenable to a stop-and-chat on Sunday) and he kindly replies to one out of every five or so emails that I send him, including when he applauded my idea to re-format the NBA Playoffs last season (I was just trying to get the Nuggets into the playoffs and was willing to revamp the entire process to do so). That being said, I understand why Nuggets fans can't stand Cuban, especially after the J.R. Smith incident this season.

The Nuggets owner Stanley Kroenke, on the other hand, may be equally passionate (and has spent the money to prove it) but certainly doesn't show it. While Cuban hoots, hollers and barks throughout each game, Kroenke calmly observes each game from the end of the Nuggets bench in the first half and then moves up to his private box for the second half.

As an NBA fan, you want an owner like Cuban or Kroenke: insanely rich, passionate about basketball, attuned to the fans and willing to spend - even if it means a financial loss - in order to win. Kroenke has been more frugal lately (and Cuban has gone on record saying he will be in the future), but I have a long memory and remember the Peter Bynoe/Bertram Lee days followed by the disastrous Robert Wussler/Comsat era of Nuggets ownership. I'll gladly take a Cuban or a Kroenke running my franchise any day of the week.

I admit I wussed out before the Hornets series by predicting that the Nuggets would win in either five or seven games. The Mavericks are undoubtedly better than the Hornets, but they're not better than the Nuggets. Plug Jason Terry into the shooting guard slot for Dallas and J.R. Smith into the same slot for Denver, and you'd still give the Nuggets an edge with their starting five while the bench matchup isn't even close. The Mavericks will have the same fundamental problem in this series that the Hornets had with the Nuggets: not enough firepower at all positions.

Denver Stiffs sees the Nuggets taking this one in five games, with the Mavericks winning Game 3 at Dallas.