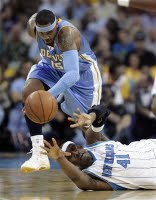 If there's one thing that's all on the coach of an NBA team, it's getting your team to focus on the game right in front of you. And on that card, Nuggets head coach George Karl gets an A grade thus far in this first round series against the New Orleans Hornets. I think it's fair to say that we've never seen a Nuggets team this consistently focused throughout a prolonged stretch of games since the second round of the 1985 playoffs when the Nuggets trounced the Jazz in five games (after a dogfight with the Spurs in Round 1).

But just in case Karl needs an extra piece of motivation to get his players fired up for Game 5 against the Hornets - who might show some life after being humiliated by a record-tying 58 point blowout at home in Game 4 - he should point out how no one who follows or works within the NBA has given the Nuggets a morsel of respect all season.

As has been well documented on this blog, before the season began not one NBA "expert" - including the local reporters who cover the Nuggets - had Denver making the playoffs. Then, as the season went on, we witnessed Spurs head coach Gregg Popovich resting his three best players in an important game at Pepsi Center on February 3rd, followed by Phil Jackson calling the Nuggets February 27th victory over his Lakers a "garbage game". Adding further insult to the Nuggets cause, as the playoffs approached and the seedings were in doubt the hosts of ESPN's "NBA Shootaround" routinely had the Nuggets finishing sixth or seventh in the Western Conference despite the Nuggets demonstrating that they could beat anyone (well, except Cleveland).

Then, when the playoffs began, some of the same "experts" had the Nuggets/Hornets series pegged as one of the likely upsets. And even during this series, Hornets head coach Byron Scott has referred to the Nuggets physical play as dirty and rarely gives the Nuggets credit while citing his own team's deficiencies as to why they're in a massive 3-1 hole. (And although this is a stretch, we could throw in Karl finishing behind the Magic's Stan Van Gundy in Coach of the Year balloting as another sign of league-wide disrespect for our Nuggets, even though Van Gundy's Magic completely choked away the end of their season with unacceptable losses to the Nets and Knicks.)

In fact, up until last night's 58-point historical drubbing, TNT's Charles Barkley - who clinged to his season long prediction of only Utah or San Antonio being worthy of giving the Lakers a fight - didn't give the Nuggets a chance to do any damage in the playoffs.

But that 58-point destruction of the Hornets will mean nothing if the Nuggets don't take care of business at home tonight in Game 5. And that can't-get-out-of-the-first-round monkey affixed to the backs of Karl and Carmelo Anthony will remain in place until these Nuggets indeed move on to Round 2.

We as fans have no reason to doubt that our Nuggets won't come out victorious tonight. But just in case Karl needs a little more motivation to re-focus the troops after Monday night's laugher, he should remind them that no one outside the Denver metro area ever gave this team an ounce of respect and many still don't.