MVP forecast: What about Chauncey?...

Share All sharing options for: MVP forecast: What about Chauncey?... 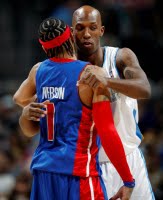 Before you read on too much, let me be the first to say that it's completely preposterous that Chauncey Billups might win the NBA's 2008-09 MVP Award. But don't blame me for bringing it up. Blame the NBA's cockamamie system of having 126 sports writers vote on five different players in order from most to least deserving.

So, given that the NBA allows you to vote for five players, does Billups crack the top five?

Why Chauncey Billups for MVP?

There're two sets of figures that clearly spell out why Billups deserves consideration: 52-24 and 34-40. That's the Nuggets record with Billups since being acquired for Allen Iverson, and the Detroit Pistons record without him. And even though it was early in the season, the Nuggets were 1-3 before Billups joined the team and the Pistons started 2-0 with him (although to be fair, those two victories were against Indiana and Washington).

Upon arrival for his second go-around with his hometown team, Billups immediately became the team's leader - something the Nuggets haven't really had in the Carmelo Anthony Era. While I love what Melo has brought to the organization since being drafted by the Nuggets, he's yet to demonstrate that he's the de facto alpha dog whom everyone falls in-line behind, as LeBron James, Dwyane Wade, Kobe Bryant, Dwight Howard, Brandon Roy, Chris Paul, Deron Williams and Tim Duncan have done with their respective teams.

Under Billups' leadership - taking orders from Nuggets coach George Karl to emphasize defense and "good shots" this season - the Nuggets have become a remarkably better defensive team while possessing a more potent and yet controlled offense. I also believe that Billups deserves a large share of the credit for the Nuggets numerous second half double-digit comebacks and the team's astounding closing ability this season (I can't find the exact number, but I think the Nuggets have only lost a game or two all season when leading going into the fourth quarter). Billups brings a commanding and calming presence onto the floor with him.

Furthermore, Billups has enabled Carmelo Anthony, Nene and J.R. Smith's offensive games to grow, as he routinely feeds them in the spots they're most comfortable with on the floor. Billups himself said on ESPN's "Pardon the Interruption" earlier in the season that had the Pistons drafted Melo, they would have won three or four NBA Championships. I'm just hoping they get to one together before Billups gets too old. 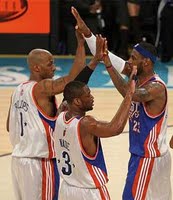 Moreover, you take Billups off the Nuggets and they're still competing for a playoff spot - albeit not a top seed - with Melo, J.R. and Nene just now reaching their potential. Lest we forget that Carmelo Anthony had led the Nuggets to five straight playoff appearances before Billups even showed up.

So if Billups isn't the MVP, who is?

Denver Stiffs pick is unequivocally LeBron James, with Kobe Bryant being the only other player deserving serious consideration. Why not Dwyane Wade, you ask? As astounding as Wade's numbers (29.9 ppg, 7.5 apg, 5.0 rpg, 2.3 spg and 1.4 bpg) and the Heat's turnaround are, at the end of the day they're a middle-of-the-pack, 43ish-win Eastern Conference team with no chance to win a championship. And from the four seed on down, the East is still a Junior Varsity conference. I liken Wade's 2008-09 season to Bryant's 2005-06 campaign when he put up 35.4 ppg, 4.5 apg, 5.3 rpg and 1.8 spg while leading a garbage Lakers team (former Nuggets training camp invitee Smush Parker was the starting point guard) to 45 wins near the peak of the Western Conference's dominance. And yet Bryant finished fourth in MVP voting behind winner Steve Nash, LeBron James and Dirk Nowitzki and ahead of, guess who, Chauncey Billups.

In summary, here's how Denver Stiffs would vote for the 2008-09 MVP if given the opportunity to do so...