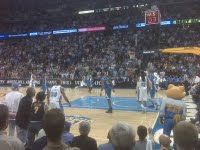 (Photo courtesy of Denver Stiffs' camera phone, Mordecai had the night off)

Normally I tack the game recap on to the game preview post, but given that tonight's win was a) so spectacular and b) so late, I figured this recap deserved its own post.

By the time you're reading this, you know all the particulars of this game/series. Such as Carmelo Anthony putting up a playoff career high 34 points to seal the Nuggets Game 5 victory (and did you notice Melo finally taking it to the hole routinely in the second half?). Or the Nuggets average winning margin in their four wins being an astounding 37 (that's what happens when you win one game by 58). Or this series win being the Nuggets first since 1994, and first seven-game series victory since 1985. Or George Karl/Melo getting that can't-win-a-playoff-series-victory monkey off their backs. Or Tracy McGrady retaining sole possession of The Best Player Never to Win a Playoff Series. And so on.

Sitting in the stands in an amped Pepsi Center tonight, my memory raced back to May 7th, 1988 - a date that will be overlooked by the mainstream sports media covering the Nuggets series win. It was on that date that I last witnessed the Nuggets winning a playoff series in person on their home floor, when the Nuggets defeated the Supersonics by two less points than they beat the Hornets tonight. And I suppose it's fitting that the Nuggets next opponent that year was the Dallas Mavericks, and here they'll be meeting the Mavericks on Sunday at 1:30.

We'll spend the next couple of days breaking down the Denver/Dallas matchup (it's still sinking in that I'm writing a second playoff series preview in the same year!) and there's no reason to celebrate anything yet. But for one day at least, let's savor this well earned, well deserved, long-time-coming Nuggets victory and give credit where credit is due...

...to Kenyon Martin for the best lockdown defense I've ever seen in a Nuggets uniform. K-Mart's footwork in particular has been exceptional.

...to Chris "Birdman" Andersen for his unrelenting hustle and activity every moment he's on the floor while cementing his reputation as what my friend Keith calls "The White Dennis Rodman".

...to Dahntay Jones for superior backcourt defense and becoming a much better finisher on the fast break.

...to Nene for maintaining his cool, not allowing the foul calls to get to him and putting forth the best playoff series of his career.

...to Anthony Carter for his timely steals to disrupt various Hornets' runs.

...to J.R. Smith for being patient, picking his moments and torturing his old team.

...to Carmelo Anthony for sharing the ball with his teammates, ceding the team's leadership to Chauncey Billups and (almost) committing to driving the ball to the basket more frequently.

...to Chauncey Billups for being an all-time pro's pro, thoroughly outplaying his point guard counterpart Chris Paul and revolutionizing Nuggets Basketball as we know it.

...to the organization for pulling the plug on Jailblazers 2.0 and revamping this roster with players the fans (and their own teammates!) could proudly root for.

...and to head coach George Karl and his coaching staff for their excellent preparation in advance of and throughout this series. The Hornets may have been "banged up" but they were a 49-win team at season's end. And yet Karl and his staff somehow turned them into the NBA's version of the Washington Generals.

With a date with a hot Dallas Mavericks team on the near horizon, Karl and his players have much work to do. But for one night, at least, we can party like it's 1988 all over again.