Coach of the Year forecast: What about Karl?...

Share All sharing options for: Coach of the Year forecast: What about Karl?...

As the 2008-09 NBA regular season winds down, you're going to start seeing a lot of awards forecasts from NBA pundits, broadcasters, radio hosts, bloggers and so forth. And with the Nuggets ascending to a surprising second-seed in the Western Conference, you're going to hear about Nuggets who might be eligible for an award or two. Since we're going to have our hands full dissecting potential playoff opponents next week, I thought we could spend the next few posts - in-between game previews and recaps - discussing season-ending awards and what Nuggets, if any, deserve to be given consideration.

And who better to start with than the most controversial Nuggets figure of them all: head coach George Karl for NBA Coach of the Year. Before reading the arguments for Karl and other coaches who will be considered for this award, please keep in mind that all NBA awards are given based on the merits of regular season performance only.

Why George Karl for Coach of the Year?

After getting swept by the Los Angeles Lakers in the first round of the playoffs last season, Karl's cumulative Nuggets post-season coaching record stood at 3-16. It appeared as though Karl had lost control and the faith of his players, and many fans (such as this one) as well as some in the mainstream Denver press were demanding his ouster. Whether Nuggets owner Stanley Kroenke kept Karl for the 2008-09 campaign because he genuinely believed in Karl's ability or simply because he didn't want to pay out Karl's approximate $3 million a year salary while also paying a new coach, we'll never know. But in the end it didn't matter. Karl was here to stay whether the fans and writers liked it or not.

With his $3 million annual salary guaranteed to him, Karl could have taken another season off, as he all but admitted to doing in prior seasons in his interview with SI.com's Ian Thomsen last month. But instead, Karl came into the 2008 training camp with a renewed focus on defense, a more disciplinary tone and perhaps a big chip on his shoulder after hearing all the criticism from the media and fans, and seeing ownership cut costs on his watch. As we've learned from those close to Karl, Karl laid out a "my way or the highway" framework for success to his Nuggets players from Day One, and the players bought it. Except Allen Iverson.

Seeing a better effort from Karl and his players, Nuggets management rightly rewarded Karl by shipping Iverson to Detroit for Chauncey Billups, the best point guard Karl has had since coaching Sam Cassell in Milwaukee (sorry, Andre Miller fans). And we all know what has happened since. With Billups taking Karl's orders on to the floor, the Nuggets are on pace to break their NBA franchise record of 54 wins, could finish as high as second in the Western Conference standings and are in position to advance in the playoffs for the first time since 1994. Some will argue that the Nuggets have done this in spite of Karl, but this blogger - one of Karl's most vehement critics in seasons past - doesn't believe that school of thought holds up.

Karl and his coaching staff deserves credit for trusting Billups to run the offense, keeping both Nene and Kenyon Martin's minutes in check while also having them on the floor for meaningful stretches of games, for handling the Carmelo Anthony insubordination incident quickly and moving past it, giving league minimum players Dahntay Jones, Anthony Carter and Chris Andersen a new lease on their NBA lives, getting the entire Nuggets roster to commit on the defensive end of the floor while giving the players a bit of freedom on offense and, perhaps most importantly, slowly building trust with the talented but erratic J.R. Smith, enabling him to become more and more consistent with each passing game. There are plenty of legitimate criticisms, too, but you can't argue with the results.

As stated in my column titled "How Do You Define a Good Coaching Job?" earlier this season, it all comes down to what the coach did with the talent he had - i.e. did he exceed expectations, meet them or do worse than he should have with the talent assembled? Yes, the Nuggets have a talented roster, but Karl still exceeded expectations beyond what anyone predicted. And that's why he seriously deserves Coach of the Year consideration.

Going along with the exceeding of expectations theme, the other Coach of the Year (COY) candidates are Cleveland's Mike Brown, Houston's Rick Adelman, Portland's Nate McMillan and Utah's Jerry Sloan. When the Jazz caught up with the Nuggets in the standings last month, I said the award should go to Sloan (who has unforgivably never won it and has endured a rash of injuries) while hammering Karl for presiding over six straight losses to sub-.500 teams. Since writing that post, Karl and the Nuggets got their act together and went 12-3 whereas Sloan's now healthy Jazz have gone 8-7. Moreover, the COY isn't a lifetime achievement award, which Sloan basically got anyway by being inducted into the Basketball Hall of Fame this week.

As successful as Karl and the Nuggets have been, it's hard to ignore Brown's Cavaliers 62 wins and more to come, including a historically astounding 37-1 home record thus far. Mo Williams was a great off-season acquisition and LeBron James undoubtedly amped his game up a couple notches, but no one thought they'd be potentally 20 games better than last season. So while I reserve the right to make my final decision at the end of the regular season, as of today the Denver Stiffs pick for Coach of the Year goes to Mike Brown, with Karl finishing second and McMillan third.

On a side note, is it just to me or do a number of COY candidates look like Muppets to you? I already called out the Doctor Bunsen Honeydew / Mike Brown comparison last year, but it donned on me that Rick Adelman and Jerry Sloan would do a damn good Waldorf and Statler impersonation.

Check out the resemblance: 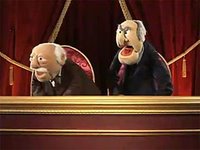 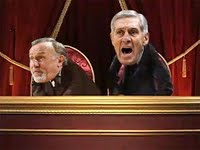 Maybe after the Nuggets bounce the Jazz in the first round and the Rockets in the second round, those two "Old School" coaches could get up in a balcony somewhere and bark about how today's NBA players don't appreciate the game, don't have enough respect, and so on. (You see, this is what happens when there isn't a Nuggets game for three days and I'm blogging late at night.)