Does George Karl know who Renaldo Balkman is now?...

Share All sharing options for: Does George Karl know who Renaldo Balkman is now?... 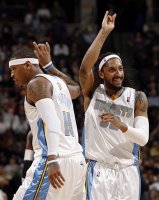 If there's one thing George Karl's supporters and critics have agreed on all season it's that he's underutilized Renaldo Balkman for no logical reason whatsoever. Before Balkman grabbed 14 rebounds to go along with nine points and six free throw attempts in just 22 minutes of playing time against the Jazz on Friday night, I was convinced that Karl couldn't pick Balkman out of a police lineup if he had to. Prior to that Jazz game, Balkman had an inexcusable eight DNP-CDs ("did not play, coach's decision") out of 11 games. And in one of those games, he played less than two minutes.

Balkman received yet another unjustified DNP-CD from Coach Karl on Monday against the Rockets. Like all of Balkman's DNP-CDs, this was completely absurd given that the Nuggets were visibly flat and no one (read: Anthony, Carmelo) was guarding Ron Artest. Call me crazy, but I'm pretty sure Balkman would have shadowed Artest's every move had he be given an opportunity to play. When you don't play your best energy guys, you end up with "acceptable losses."

Thankfully for us fans, Karl inputted Balkman into the starting lineup against the Thunder (sans Kevin Durant) tonight, and he was the best player on the floor while leading the Nuggets to a much needed victory. In 30 minutes of playing time, Balkman posted 14 points, 14 rebounds (eight offensive!), three assists, two steals and a block. Oh, and had he missed a few easy tip-ins while relentlessly distracting the Thunder on the defensive end, as well. And not surprisingly, when he was taken out of the game, Balkman received a standing ovation from the remaining fans at Pepsi Center.

I'm not exactly sure what Balkman needs to do to get more playing time in Coach Karl's "rotation" but I can only hope that Karl finally recognizes his value to the team. It's only come 66 games late.

It's not raining.
It's just cloudy.
The clouds will go away.
The sun will come up again.

But at least Karl is a better poet than Jewel or Viggo Mortensen. So he has that going for him, which is nice.

While Karl may see sunshine in the air, I see a hot Thunder team coming to town. I see a team that's won five of their last six games, and should have beaten the Nuggets in both games the teams played at Oklahoma City this season. The Nuggets needed a Carmelo Anthony miracle shot to win the first game and a bad call/another Melo game-winner to pull off the second game. But this Thunder team isn't handing out wins at the airport anymore. And they've even done something this week that the Nuggets couldn't do: win in @#$%& Sacramento!!!

As pointed out in my Monday night column, the NBA has handed the Nuggets a gift schedule over the remaining 17 games. Karl has a golden opportunity to salvage a once-great Nuggets season and guide the Nuggets to a three or a four-seed and a division lead. I want to see timeouts called within two possessions of the Nuggets letting a big lead slip away. I want to see technical fouls because he's working the refs over. And I want to see him screaming at his players in the huddle regardless of what the score is. A friend of mine sat right next to the Celtics' bench during the Celts' 114-76 blowout win over our Nuggets. He told me that Celtics' coach Doc Rivers was screaming at his team during every timeout and during every possession - even when the outcome of the game was no longer in doubt - as if Game 7 of the NBA Finals was on the line. That's what we need to see out of Karl. The "I'm at peace with myself" Zen nonsense that Karl has fallen back into needs to be taken over by the Furious George who yelled at these players before training camp started and demanded a better defensive effort earlier in the season.

But this isn't all on Karl. Carmelo Anthony needs to take responsibility, as well. Starting tonight, every time Melo shoots less than eight free throws in a game, he's staying with Karl on the Stiff List. Forget the defense, Melo, you just don't have it in you. But Melo should be punishing opponents by taking the ball to the rack. Over his last seven games, Melo is averaging 4.7 free throw attempts per night. That's unacceptably low for a player of Melo's calibre. Even in the Nuggets big wins over the Blazers, Lakers and Hawks, Melo shot just six, four and two free throws, respectively. And Melo - having missed 13 games due to injury and three more due to suspension - has absolutely no excuse to be fatigued.

Before I actually get to work for the day, I want to respond to a few of the comments from Monday's post written by Denver Stiffs reader "E" which, like most of the comments we get here, was very well thought out and well written - a credit to this blog's readers and their passion for the Nuggets. Yesterday, "E" wrote, among other things:

Andrew. No offense, but you softened up on Karl with comments like "giving credit where it's due (paraphrased)" and with posts titled "Best. Start. Ever." This is not something that was hard to see coming. This slump was inevitable. Your positivity and loyalty as a fan are both remarkable and laughable for obvious reasons. I sometimes wonder if Karl's lawyer didn't get to you. Did you really believe in the original title of this site, or did you just want a catchy name to jump-start this blog?

When I read comments like this, I feel like the anchors on CNBC who cheerleaded the stock market run up and then gave us no warnings about the market collapsing. But I have a few responses and you can take them for what they're worth.

First off, before the season even began Denver Stiffs predicted that the Nuggets would finish 8th in the conference. A prediction, by the way, that no one else agreed with except a few loyal Nuggets fans like me. And I don't think anyone - including me - had the Nuggets pegged for a 50-win season (we also didn't know that the Nuggets would get Chauncey Billups, a healthy Nene and a rejuvenated Chris Andersen in place of a petulant Allen Iverson, an aging Marcus Camby and a now oft-injured Eduardo Najera). This doesn't mean we should be satisfied with just 50 wins and an 8th-seed, because we shouldn't. It just means that the expectations were low going into the season and when the Nuggets began exceeding them out of the gate, it didn't make any sense to me to bag on the coach every day. Knowing that Karl was giving a visibly better effort than last season combined with the new players on the roster, I felt like the Nuggets were on to something special and wanted to enjoy it, not tear it down. I won't apologize for being a fan.

Second, even when this site was known as FGK.com, I have always said you can't have it both ways: criticize the coach when the team is down but not give him any credit when they're up. If you do that, you lose credibility with your argument on both ends. Therefore, when the Nuggets were playing well, I believed (and still believe) that Karl deserved credit for this and made a concerted effort to say so. And it's not like I spared Karl any criticism along the way. I've constantly harped on the over-use of the front line, the inconsistent rotations, the inability to call a timeout before the Nuggets completely give a lead away, the lack of play calling, the mysterious non-use of Renaldo Balkman and the bizarre handling of J.R. Smith. I'm just not going to be like Rush Limbaugh who's openly rooting for Barack Obama to fail. I don't want Karl to fail, I want him to succeed and when he succeeds, I'll give him props for doing so.

Third, I changed this site's name to DenverStiffs.com for an assortment of reasons that I encourage readers to revisit if you have time. But the general gist of the name change was that what started as a "fire the coach" blog quickly morphed into a general Nuggets blog, and that's the space I'm much more adept at writing in. And even though FGK.com might have unintentionally been a great way to kick off a Nuggets blog, since changing the name this site's traffic has quadrupled and routinely gets about as many page views, hits and comments than all other Nuggets blogs combined (and you should see my e-mail box every day, too). More to the point, I can't and won't spend every day of my life ragging on George Karl, but I can spend every day of my life writing about my favorite basketball team.

While we're at it, let's set the record straight on where Denver Stiffs stands with George Karl. With 17 games left in what's been a sometimes remarkable but recently very frustrating season, firing Karl now a) won't change anything and b) won't happen anyway. You really think Adrian Dantley or Chad Iske will guide the Nuggets to the promised land? That being said, I will uphold the mantra of this site from last season: if the Nuggets miss the playoffs or make the playoffs but lose in the first round for the sixth consecutive season (five under George Karl), Denver Stiffs will demand a coaching change.