Are we witnessing the next great Karl implosion?...

Share All sharing options for: Are we witnessing the next great Karl implosion?...

As someone who's been investing his (nominal) savings in the stock market for the past few years, all I've wanted to know lately is: "have we hit the bottom yet?" After watching the Nuggets get dismantled by - and then briefly comeback against before ultimately losing to - the Rockets tonight, I find myself asking the same question about the Nuggets. I desperately want to know if we're in the middle of another infamous George Karl downturn or if we've just hit a bottom, and the Nuggets will be furiously coming back in the weeks ahead to regain our trust as fans and salvage a once great regular season. Because as all of us "investors" have learned, it's damn hard to know where the bottom is if you're just in the middle of the downturn.

But before we start rearranging the deck chairs on the Titanic that's been the Nuggets season recently, let's keep things in a little perspective. In spite of a third straight loss (and a fifth loss in six games) and a horrendous display of basketball since the All-Star break, the Nuggets remain on pace for a 50-win season and are only one game back of division leaders Utah and Portland. Moreover, with 17 games remaining the Nuggets have an embarrassingly easy schedule. Of those 17 games to come, 10 are at home and nine of those 10 games are against sub-.500 teams (although given that the Nuggets are 0-5 against sub-.500 teams since February 7th, maybe I should be rooting for good teams to come to Pepsi Center). Before the season concludes, the Nuggets will only have to play plus-.500 teams six more times and even get home dates against Oklahoma City and the Clippers twice apiece! It's like having an AFC West schedule and we all know how well the Broncos have benefited from that lately. Oh, wait...

In other words, it would take yet another colossal George Karl implosion to sink the Nuggets season and miss the playoffs altogether. But as fans of the 2001-02 Milwaukee Bucks know all too well, there is precedence for this sort of thing when Karl is involved.

So if the Nuggets have indeed hit their bottom, the cream puff games coming up should merely be stepping stones to wrapping up a solid season and finishing high enough in the Western Conference standings to give themselves a fighting chance at a playoff series victory. But if the Nuggets are in the middle of a downturn as we're all beginning to fear, the bottom could be very, very ugly. 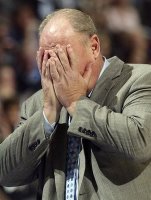 A few weeks ago, with the Nuggets clinging on to third place in the Western Conference with a healthy three game lead over Portland and a four-plus game lead over Utah, ESPN mentioned that Nuggets head coach George Karl should get Coach of the Year consideration. A few readers of this blog picked up on that unintentional joke and commented about it the absurdity of it, but it didn't get much more play here or elsewhere.

On Sunday night in Sacramento (in front of a practically empty barn, mind you), ESPN's "Coach" of the Year candidate Karl got out-coached by Kenny Natt - who's only claim to fame among Denver area fans is that he's the brother of former Nuggets' power forward Calvin Natt. And on Friday night, Karl got out-coached by the true Coach of the Year, Jerry Sloan. I don't even have the heart to look at the schedule right now to see who's going to out-coach Karl this week.

While Karl spent all of February and early March under-promising and under-delivering, Sloan quietly did what Sloan does best: win basketball games. After today's fourth quarter comeback victory in Toronto in which Sloan's Jazz doubled the Raptors' scoring output in the final period, the Jazz win streak reached 11. Sloan's Jazz now stand a half game ahead of Karl's Nuggets during a season in which Carlos Boozer has missed 45 games, Andrei Kirilenko has missed 11 games and Deron Williams has missed 13 games due to injury. I don't care what happens the rest of the season, give Sloan the Coach of the Year trophy right now.

If ever one needed evidence of how far removed Karl should be from any Coach of the Year conversation, one only needs to look at the last two minutes of the first half of that Friday night Jazz game. With a 19-point lead in his possession, Karl sat quietly as his team allowed the Jazz to steamroll them down to a 10-point lead to close the half. Good coaches know how to close quarters to stave off cheap baskets and steal a big road win. Karl - who coached quite well earlier this season - has been anything but a good coach lately. He's been unable to get his players to "respect the regular season" and has reprised his role as the highest paid person to get a free courtside seat at NBA games.

If Karl intends on keeping that cushy courtside seat, I suggest he gets his players to start respecting the first half of a basketball game. Coach Karl, you're back to #1 on the Stiff List!