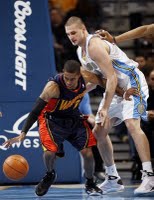 In hindsight, I can't believe I was worried for a second about this game with the Warriors tonight. I sat right across from the Warriors bench and couldn't tell you who the three players (that's right, three) were sitting next to Don Nelson and his coaching staff if my life depended on it. And I'm obsessed with the NBA! But that's what happens when Andris Biedrins, Stephen Jackson and Corey Maggette don't even both traveling with the team. I mean, seriously, who are these guys?

In what has otherwise been a terrific slew of basketball games since the Nuggets went slump busting against the New Jersey Nets in Denver a few weeks ago, the one frustration among Nuggets fans (and the coaching staff) has been the poor play of Linas Kleiza. On the one hand, we've lived with it knowing that Kleiza might get the boot in favor of the much beloved Renaldo Balkman in the playoff rotation (and may still). But on the other hand, you never want to see any of your favorite team's players struggle, especially someone who's been a Nuggets' stalwart for the past four seasons like Kleiza.

If ever there was a team to break out of a slump against, I suppose it would be the underhanded Warriors. And break out of a slump Kleiza did, posting 22 points off the bench and actually making a three-point shot (although it took him four attempts) for the first time in 10 games, excluding his miracle three-point hook shot in Phoenix on Monday night. (It should be noted that Kleiza's +/- was -12...eek...but don't tell him that, we need his spirits up.)

Like most Nuggets fans, I'd rather see Balkman on the floor than Kleiza when George Karl shortens his "rotation" for the playoffs in April. But we could be a freak Carmelo Anthony or J.R. Smith injury away from really needing Kleiza in the postseason, so it's best to keep his confidence up and perhaps a game like this will help. Moreover, don't forget that it was only J.R. and Kleiza who stepped up against the Lakers in the playoffs last year. A fearless, confident Kleiza is an undeniably important asset.

Congrats to the Nuggets on a relatively easy win at home. It's rare when watching Rocky is more entertaining than the game itself, but I'll happily deal with it!

It's hard to believe, but around this time last season the Nuggets were neck-and-neck with the Warriors for the eighth and final playoff seed (and the right to get slaughtered by the Lakers). The Warriors would finish the 2007-08 with a very respectable 48 wins, their best record in 13 years. And yet they missed the playoffs for the 13th time in 14 seasons after the Nuggets beat them in Oakland and finished the season with 50 wins. This season will make it 14 missed postseasons in 15 seasons for Golden State, as the Warriors have reverted to their disastrous ways due to an assortment of injuries, questionable personnel moves and organization in-fighting.

This doesn't mean the Warriors aren't a dangerous team, however, as they're playing with nothing to lose and many of their young players are trying to prove their worth in the NBA. In the month of March, the Warriors almost beat the Jazz in Salt Lake City, the Lakers in Los Angeles and the Spurs in San Antonio. Their inexperience and poor shot selection always does them in, but they can make their opponent's fans sweat for about 46 of any game's 48 minutes.

The good news for Nuggets fans is that we get a fresh Nene back tonight and the Warriors' best player, Stephen Jackson, is likely out with a toe injury. This game falls into the category of "no excuses not to win" for our Nuggets, but it's by no means an assured victory.