The swift ass kicking we were looking for...

Share All sharing options for: The swift ass kicking we were looking for...

Even though the Nuggets are having a great regular season, we've only had a few opportunities to say "well, they did exactly what they should have done against [opposing team name here]." Even though no wins should be taken for granted, a playoff caliber team like the Nuggets should crush an Eastern Conference team that's 10 games under .500, missing its best player and played on the road the night before. It's just nice to see the Nuggets realizing this, too.

Denver Stiffs primary concern at this point is the health of Renaldo Balkman who was in the middle of another great outing when he "strained" his groin. Balkman's injury aside (for the moment), you had to love J.R. Smith letting the game come to him en route to six three-pointers, four assists and zero turnovers. J.R. is now third all-time on the Nuggets three-point shots made list with the second place guy - Dale Ellis (one of my least favorite all-time Nuggets) - in sight by season's end.

And as a shoutout to Denver Stiffs loyal reader Mordecai - yes, I realize the Nuggets are back in first place in the Northwest Division!...albeit just a half game ahead of Portland and a game-and-a-half ahead of Utah. Seeing how they played tonight and considering the schedule to wrap up the season, there's no excuse for the Nuggets not to stay there. Good win, Nuggets! 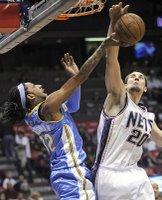 By now, February 7th has become a memorable date to anyone who follows the Nuggets closely. On that date, the Nuggets got pummeled by 44 points by the Nets in New Jersey, marking first time the Nuggets had lost to a sub-.500 team with Chauncey Billups. Including that game, the Nuggets went on to drop four straight games to sub-.500 teams, lost nine of 17 games overall and had two three-game losing streaks. The Nuggets have gotten back on track somewhat by winning their last two games against sub-.500 teams by beating the Thunder and Clippers last week. But both of those games were at home and the Thunder and Clippers' best players - Kevin Durant and Zach Randolph, respectively - were out.

With the Nets making their annual trek to the Pepsi Center tonight (most likely sans All-Star Devin Harris who was inadvertently taken down by former Nugget Marcus Camby last night), the Nuggets have the opportunity to avenge that historically bad loss and put a bookend on this bad stretch during what has otherwise been a great regular season.

Even though the Nuggets are back on the winning track, they need a statement game that serves notice to the NBA, themselves and their fans that they mean business going into the playoffs. Let's hope the Nuggets have long memories and make tonight's contest that statement game.