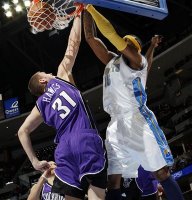 Simply put, the Nuggets haven't lost to the likes of Toronto, Washington, Memphis, Minnesota, Oklahoma City, the Clippers or Sacramento, whom they face this evening on the road in Sactown.

Losing to New Jersey or Indiana is bad and borderline inexcusable. But a loss to Sacramento would go beyond inexcusable into disgraceful territory. Especially with Utah winning their 11th straight game today and tying the Nuggets for the division lead. Let's hope the Nuggets and their coach take tonight's game in Sacramento as seriously as the fans are. Go Nuggets!!