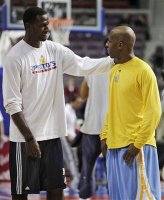 Why do the Nuggets suck so badly against teams from the Midwest? Against the Cavs, Bucks, Bulls and now Pistons on the road this season, the Nuggets are 0-4 (2-6 including games at Pepsi Center).

I still haven't recovered from J.R. Smith missing that two-handed dunk with about a minute left that would have cut this game to two points. But give J.R. credit, he almost - almost - bailed the Nuggets out of yet another game. But as is often the case when George Karl turns to his former nemesis to bail out the team, it was too little too late. The Nuggets were just never able to sustain imposing their will on the Pistons and did their patented third quarter lead giveaway.

Tonight's loss, combined with Carmelo Anthony's insubordination and subsequent suspension, has us all scratching our heads right now. What happened to our once magical regular season where these Nuggets gutted out win after win after win? We could literally be in third place in the division by the weekend. No joke.

We'll get into all of this more with tomorrow's post. Right now I'm sick to my stomach having watched one of my all-time favorite Nuggets teams unravel before my eyes. 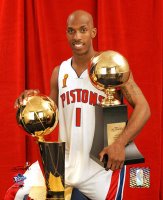 First off, before everyone jumps down Denver Stiffs' throat about where I stand generally with Carmelo Anthony, please read this and this. As a self proclaimed Nuggets historian, I'm fully aware of the state of the Nuggets franchise before Melo's arrival in 2003 and also recognize that Jeff Bzdelik had this team pointed in the right direction before a) management sandbagged him without unequivocally supporting him and b) George Karl took over and hasn't taken the Nuggets any further than Bzdelik did. And frankly, I don't even want to think about what the Nuggets would look like sans Melo right now.

That being said, giving credit to Melo for resurrecting the Nuggets franchise doesn't excuse him from public acts of insubordination against his coach (if that's indeed what happened), regardless of who is coach is. Call me old-school for thinking that, but that's the way I see things. If a player has an issue with his coach, he can take it up in the locker room after the game or during halftime. Not in front of all his teammates and the fans in the middle of a game.

While the Melo suspension story remains front and center, we in Nuggets Nation have more pressing matters to attend to. Namely, beating a wounded Pistons team in Detroit tonight to give the Nuggets just a little more breathing room before the most arduous back-to-back games of the season kick off with the Trailblazers in Denver on Thursday and at Utah on Friday. Can you say "tough week"?

Simply put, while we're all thrilled with a surprisingly good regular season thus far, for all the Nuggets efforts they find themselves a mere 1.5 games ahead of Portland and just two better than Utah. Worse yet, the Nuggets are only three games ahead of eighth-seeded Dallas. In other words, a couple more inexcusable losses (like we saw in Indiana that led to the Melo suspension) and the Nuggets will be fighting to make the playoffs, not win the division.

Even though Detroit has won two straight (without Allen Iverson as everyone is constantly reminded), they remain a dreadful team. Melo or no Melo, the Nuggets have no excuse not to avenge a loss to the Pistons at Pepsi Center earlier this year. I'm looking - errr hoping - Chauncey Billups will take it to his old team from the get go tonight, and the Nuggets score their 40th win already. A plateau they should have reached by now.