Biggest win of the season (so far)...

Share All sharing options for: Biggest win of the season (so far)... 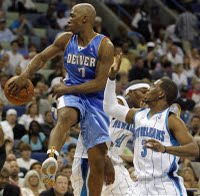 I don't know what George Karl said to his undermanned Nuggets in advance of tonight's game in New Orleans, but maybe (and this would be uncharacteristic of Karl) he told them that some games are, in fact, more important than others. Because the Nuggets came out of the gate with a great effort, never relented and pulled off their biggest win of the season.

In what has been a season chock full of bi-polar performances from our Nuggets, the one thing we hadn't seen yet was a definitive road win against a top Western Conference team. Unlike other Nuggets' road games against the west's elite, tonight they never had to climb back from a big deficit or forgot to take the ball to the hole or had long defensive lapses that we've unfortunately become used to. In fact, prior to tonight's victory, the Nuggets had won just two games on the road against a top-nine Western Conference team.

With the exception of the win over the Lakers in Denver a while back, I don't remember a more complete defensive effort from the entire Nuggets team against a tough opponent. And even though we didn't get the Chris Andersen stat line I was jokingly hoping for in my game preview, I'll happily take his nine points, nine rebounds, two blocks, two steals and half court stare down at Hornets owner (and all-time hypocrite) George Shinn after blocking David West twice and helping to secure the Nuggets victory.

You read that headline correct; tonight's game against the Hornets is the most important game of the season (so far) for our Nuggets...and Nene won't be playing in it. The NBA just announced that Nene has been suspended for two games for head butting the Suns' Louis Amundson on Monday night and then making contact with an official. The suspension shouldn't be surprising to any of us, but makes the NBA's two-game suspension of Zach Randolph for punching Amundson in the face a month ago even more perplexing. Being a non-repeat offender, Nene should have gotten a one-game suspension, tops.

As the Western Conference playoff positioning shakes out over the next few weeks, there will be other games that become more important than tonight's contest in the Big Easy. But as of right now - Nene or no Nene - it's imperative that the Nuggets beat the Hornets if they hope to have home court advantage in the first round of the playoffs. Because as Nuggetsadamus predicted last week, it's likely that the Nuggets and Hornets will end up with the exact same record at season's end. If the Hornets end up as the victor of tonight's game, they would get that tiebreaker. If the Nuggets win, they'd tie up the season series at two wins apiece, and the next tiebreaker would be conference record, which the Nuggets likely will have over the Hornets by a game.

After this game is over, I hope I'll be writing about the 16 points, 12 rebounds and four blocked shots Chris Andersen laid on his former teammates while filling in for Nene and leading the Nuggets to victory. Because that's the type of game we're going to need from the Birdman to keep the Nuggets hopes of home court alive.