Share All sharing options for: Melo suspended...by the Nuggets!... 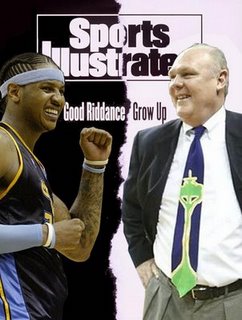 According to the Denver Post's Benjamin Hochman, Carmelo Anthony has been suspended one game by the Nuggets for an "in-game transgression." Hochman is citing multiple sources who claim Melo refused to come out of the game in the third quarter during the Nuggets (inexcusable and unnecessary) loss at Indiana. As I'm writing this, I'm re-watching the archived game on NBA League Pass Broadband, and can't see anything weird happening between Melo and the bench.

Melo's act of insubordination brings up memories of Melo vs. Karl incidents from the past, including Melo's infamous barking at Karl "just don't sit there!!" from the bench during last season's playoffs and ESPN alleging that Karl wanted Melo traded last summer.

Regardless of what you think of Karl, I have to side with the coach on this one (for the record, I'll side with any coach who instructs a player to come out and the player refuses). But if it's indeed true that Melo refused to come out of the game, why didn't Karl sit his ass for the entire fourth quarter? That would have sent a stern message to the team and maybe they wouldn't have had to suspend him for a now-very-important Detroit game tomorrow night.

Yet again, Melo can't seem to go through a full season "incident free." While my hunch is that this latest dust up between Melo and Karl won't have long term ramifications (at least not for this season), the joke is probably on me. Because just when I think Melo has turned the corner, he disappoints again.

Melo, welcome back to the Stiff List. You'll be joining Jay Cutler there.